FIRST AND ONLY EDITION. Trithemius‘ important work is a plea defending the art of writing, specifically the art of handwriting and copying manuscripts. The text was written in 1492 under the title De laude scriptorum manualium and published in Mainz in 1494.

Johannes Trithemius (born Johann Heidenberg in Trittenheim, 1462) was a 15th-century humanist, a historian and Kabbalist. He is also considered the founder of modern cryptography and had a great influence on the development of modern occultism. Famous occultists such as Heinrich Cornelius Agrippa (1486-1535) and Paracelsus (1493-1541) studied under him. Trithemius was the abbot of the Benedictines of Spanheim and then of St. James’s Abbey, Würzburg where he died in 1516.

A great scholar and bibliophile, Trithemus was a devoted collector of manuscripts and incunabula. Due to his passion and diligence, the Spanheim Library became one of the richest and most beautiful of its time, going from 48 works before his time there to more than 2000 through Trithemus‘ efforts. Trithemus did not enjoy great praise in his time because of his interest in occultism and his reputation as a magician. This led to conflicts with the Spanheim convent and to his resignation in 1506.

Written in the form of a letter, „De laude scriptorum“ (In Praise of Scribes) is a plea for the art of handwriting, an issue central to the contemporary polemic that emerged during the second half of the 15th-century once the invention of printing by Gutenberg had quickly spread around Europe. Trithemius‘ work must have been at odds with the general praise of the printing press at the time.

In the 15th century, book printing was unanimously highly regarded, often seen as more valuable than handwriting. However, it is important to note that Trithemius did not truly disregard the importance of book printing, his focus is actually on the scholastic aim of handwriting, especially for monks. He feared book printing will pull monks further away from the noble endeavor of handwriting, which is why he wrote this work in praise of manuscript writing.

Through the work’s 16 chapters, we can take note of how Trithemius‘ interests in writing, books, and religion are intertwined: the chapters further his plea by tackling various aspects that mean to prove how handwriting is superior to book printing. He talks about the usefulness of the Holy Scriptures; the care and love his predecessors had for books, how good and useful writing is for monks; the art of writing correctly and efficiently; whether writing on religious holidays is permitted, about the care one needs to show towards books, etc. His central argument is that manuscripts are far superior to printed books, due to the writer’s care and effort, even accusing book printers and their defenders of laziness.

Tritemius‘ plea is also in favor of writing on vellum rather than on paper. His argument centers around the idea that information written on traditional parchement would be far more durable than that on the newer medium of paper: „All of you know the difference between a manuscript and a printed book. The word written on parchment will last a thousand years. The printed word is on paper. How long will it last? The most you can expect a book of paper to survive is two hundred years. Yet, there are many who think they can entrust their works to paper. Only time will tell.“ (Translated in Tribble and Trubek eds., Writing Material: Readings from Plato to the Digital Age 2003).

Trithemius furthers his plea by pointing out that all information could never be published in print, or collected in a single library: „Yes, many books are now available in print but no matter how many books will be printed, there will always be some left unprinted and worth copying. No one will ever be able to locate and buy all printed books. . . .“ (Translated in Tribble and Trubek eds., Writing Material: Readings from Plato to the Digital Age [2003]).“ In this sense, he believed that it was the monks‘ responsibility to continue copying and thus preserving less popular texts which would not always be considered „print-worthy“. Furthermore, through the monks‘ manual endeavor, they would produce high-quality copies, could even include decorative elements along the texts, which was at the time not possible in the case of printed texts. His argument is furthered by the idea that even printed text would benefit from being copied by hand, since written text is so important for scholastical purposes, and copies of each text are never sufficient.

The fear of mechanical reproduction is a normal part of the writer’s anxiety in face of the possibility that scribal culture may disappear. He expresses doubts about the longevity of paper and is worried about the inevitable loss of works that are considered not deemed to be published (Y. Sordet, Histoire du livre et de l’edition, 2021).

In the context of the printing press revolution, it’s not suprising Trithemius‘ treatise did not enjoy great support in his time. This is probably why it has only been published in one edition, by Peter von Freidberg, in Mainz.

We could only locate 35 other copies in public libraries, only 4 of them outside of Europe, in the United States (Countway Library, Boston; Houghton Library, Cambridge; Morgan Library, New York; Huntington Library, San Marino, California).

40 Bl. a–k4. 30 lines per page. With 10 woodcuts, out of which one is repeated 5 times. The images illustrate, among others, the story of Jesus and the sinful woman washing his feet, the parable of the rich man and Lazarus, Ascension Day, King David, the scene of Jesus‘ crucifixion.

FIRST EDITION. Early work on the spirit of compunction. Hieronymus Baldung was a doctor, humanist, doctor, and writer of religious texts. Born in Schwäbisch-Gmünd around 1460, Baldung died around 1520.

78 leaves with 35 lines per page, written in Gothic script.

FIRST AND ONLY EDITION of this anonymous treatise on sin. It includes an alphabetical „index“ of sins. It is the only work from the 1490s that has Husner’s name in the colophon.

FIRST AND ONLY EDITION OF Trithemius’s speech on the effectiveness of divine love, delivered in Erfurt on August 27, 1497; printed in Mainz later that year.

18 leaves, a-c6, 45 lines per page. With one woodcut that shows the Virgin Mary with Jesus in her arms on the title page and 4 on the last page. The last four woodcuts show biblical scenes such as the birth of Jesus Christ, the crucifixion.

FIRST AND ONLY EDITION of this anonymous and very early treaty on the Confraternity of the Holy Rosary, a Roman Catholic Archconfraternity or spiritual association, under the care and guidance of the Dominican Order. The members of the confraternity strive to pray the entire Holy Rosary weekly. From Cologne, the first documented and subsequently largest German community of this kind, to which even Emperor Friedrich III, his wife Eleonora and his son Maximilian I belonged, the Brotherhood of the Rosary quickly spread across Germany, Holland and Flanders.

6 leaves. 45-46 lines per page. There are only 4 copies in public libraries (3 in Germany, one in England), none outside of Europe.

FIRST AND ONLY EDITION of this theological text in the form of a prayer, talking about religious virtues. Adorned with a large woodcut on the verso of the title page, showing the author kneeling down, praying to God. (cf. Schreiber, n°3637).

Valuable collection of 7 incunabula, mainly religious and scholastical texts, including a very interesting treaty on the importance of handwriting by Johannes Trithemius, an important figure of the German Renaissance. Bound in a beautiful contemporary leather binding.

4to [218 x 150 x 49 mm]. Leather binding on wooden boards with metal lock, binding with floral and religious decorations. A variety of stamps are used on the binding: the Agnus Dei („Lamb of God“), a saint’s figure (possibly Matthew the Apostle), Virgin Mary and baby Jesus surrounded by a halo, as well as some ornamental floral motifs, and a few fleurs-de-lis. With three inscriptions: [Maria]; [Mathias?] and an unidentified one.

With a contemporary handwritten index of the works on the first page. The endpapers are pergament leaves, the front-endpaper is also a religious manuscript in Latin from the 15th century.

Binding and spine slightly rubbed and with some abrasions and a few missing fragments; with two small restorations on the back cover. Spine slightly split on the lower part. Binding and a few pages with very small wormholes. 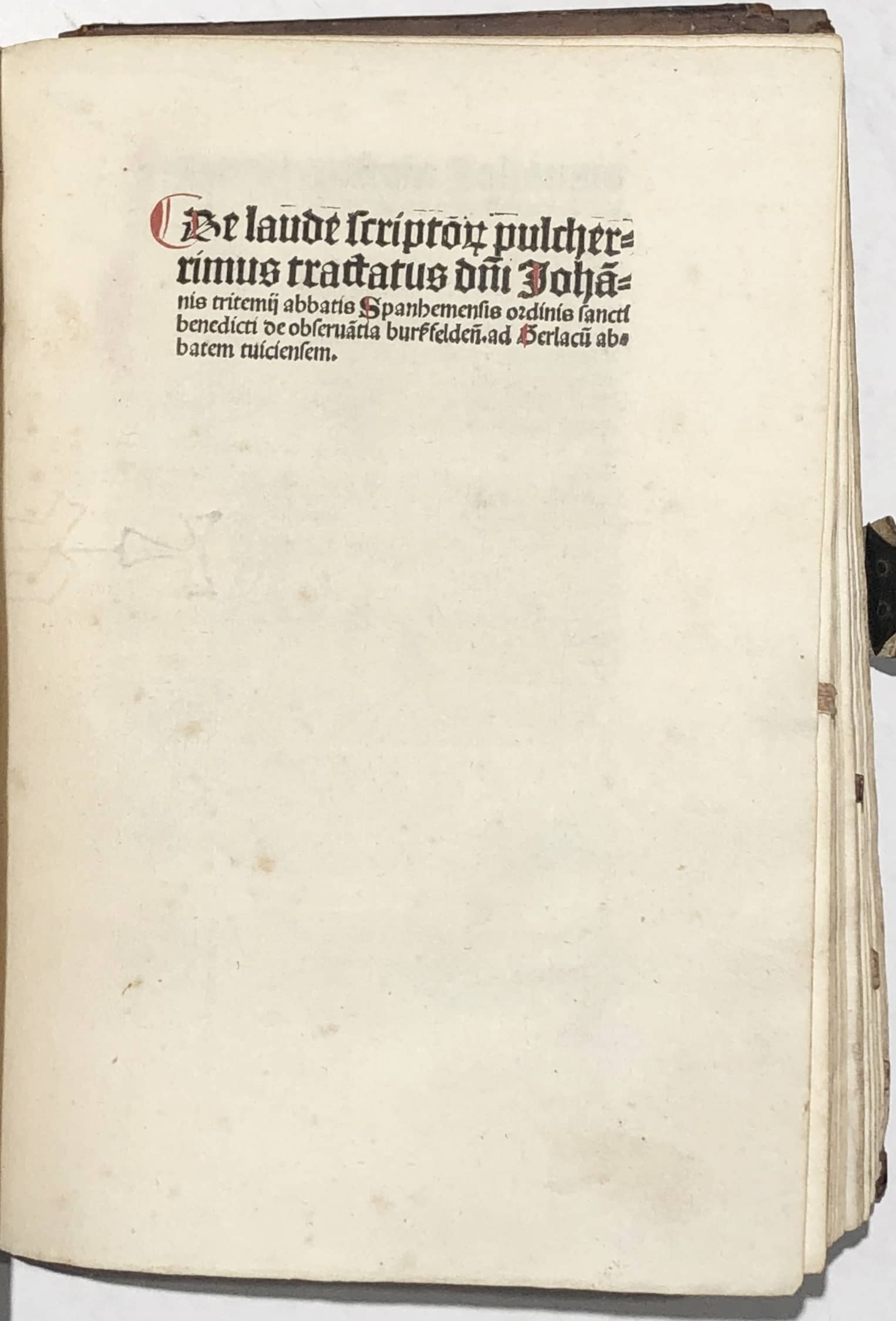 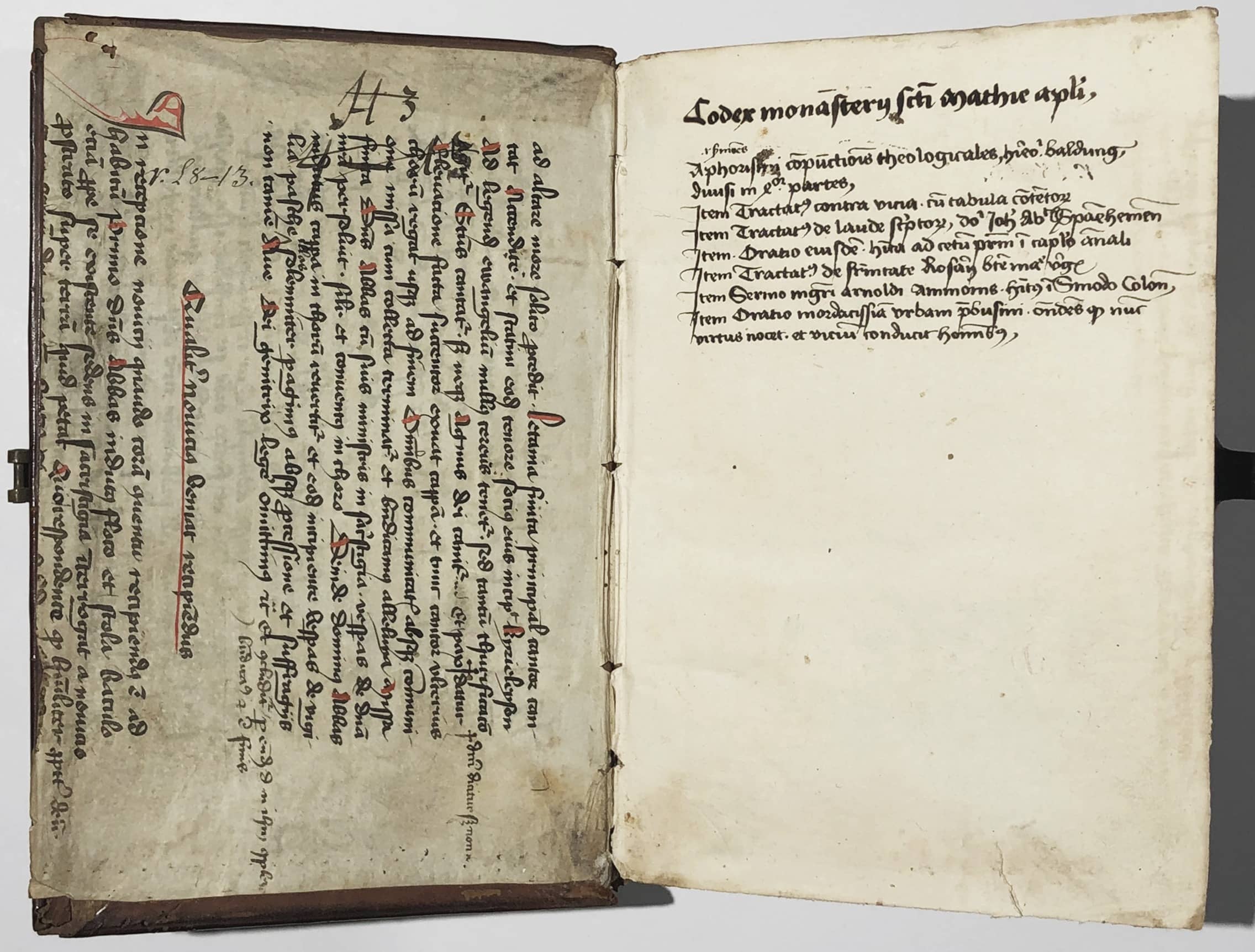 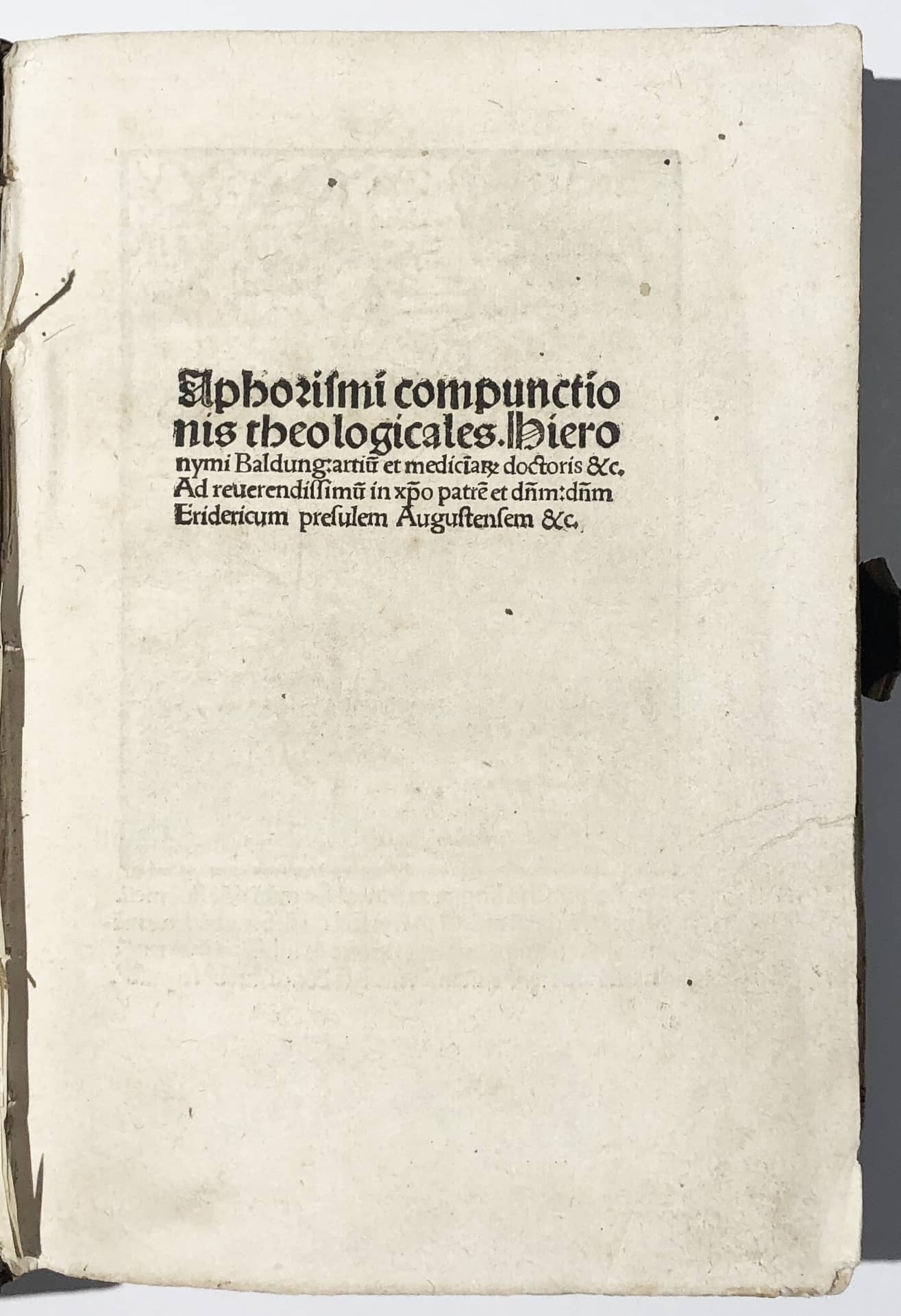 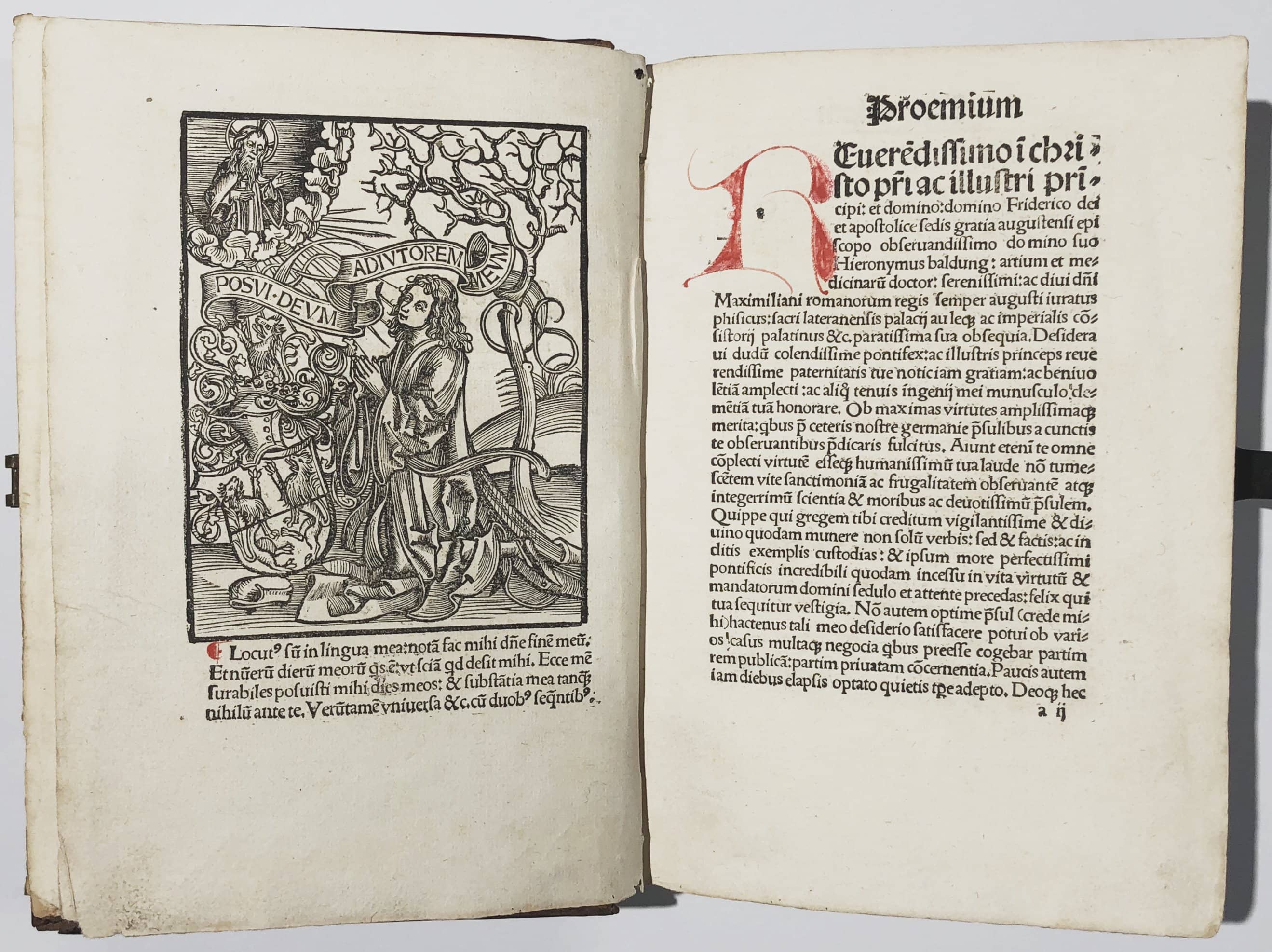 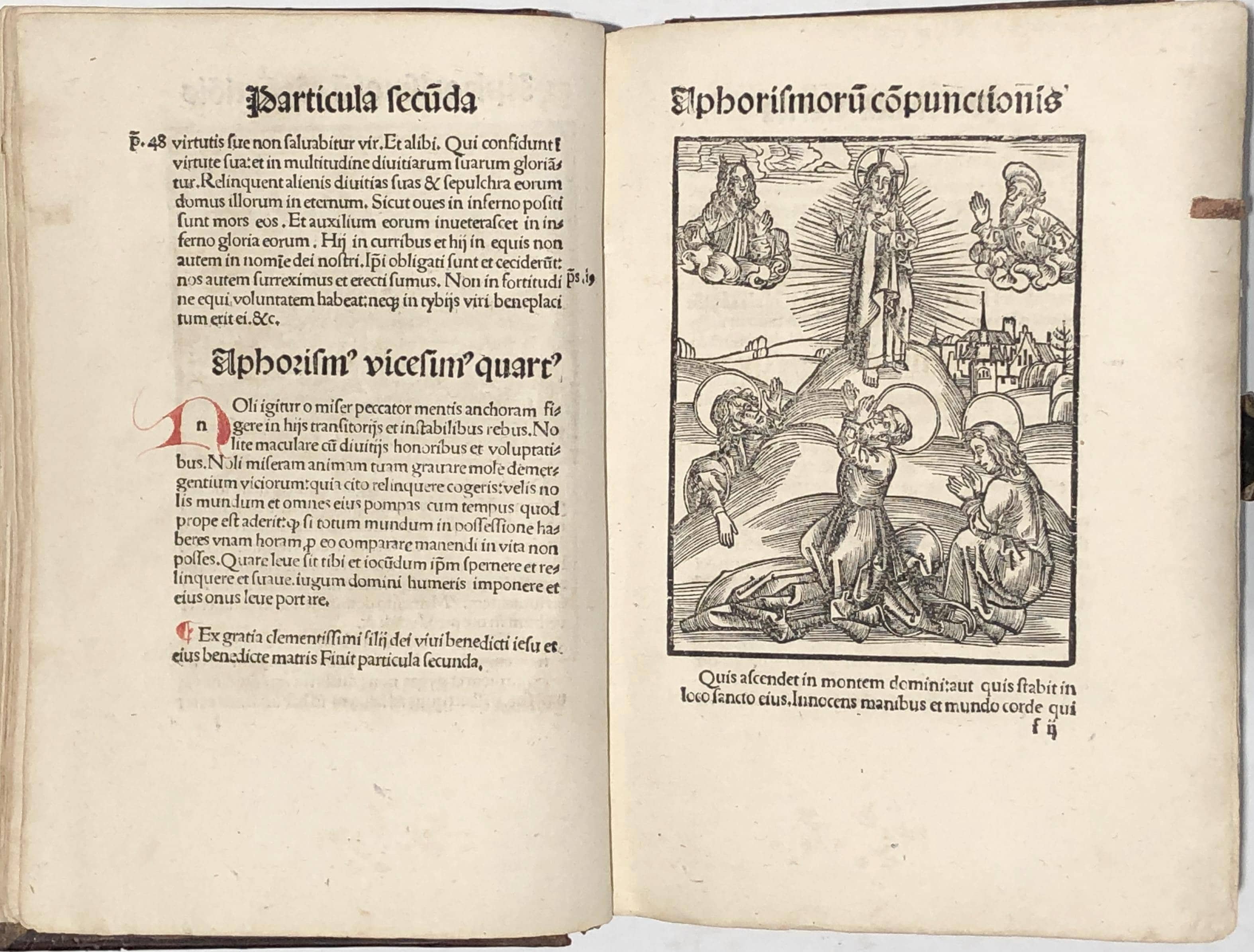 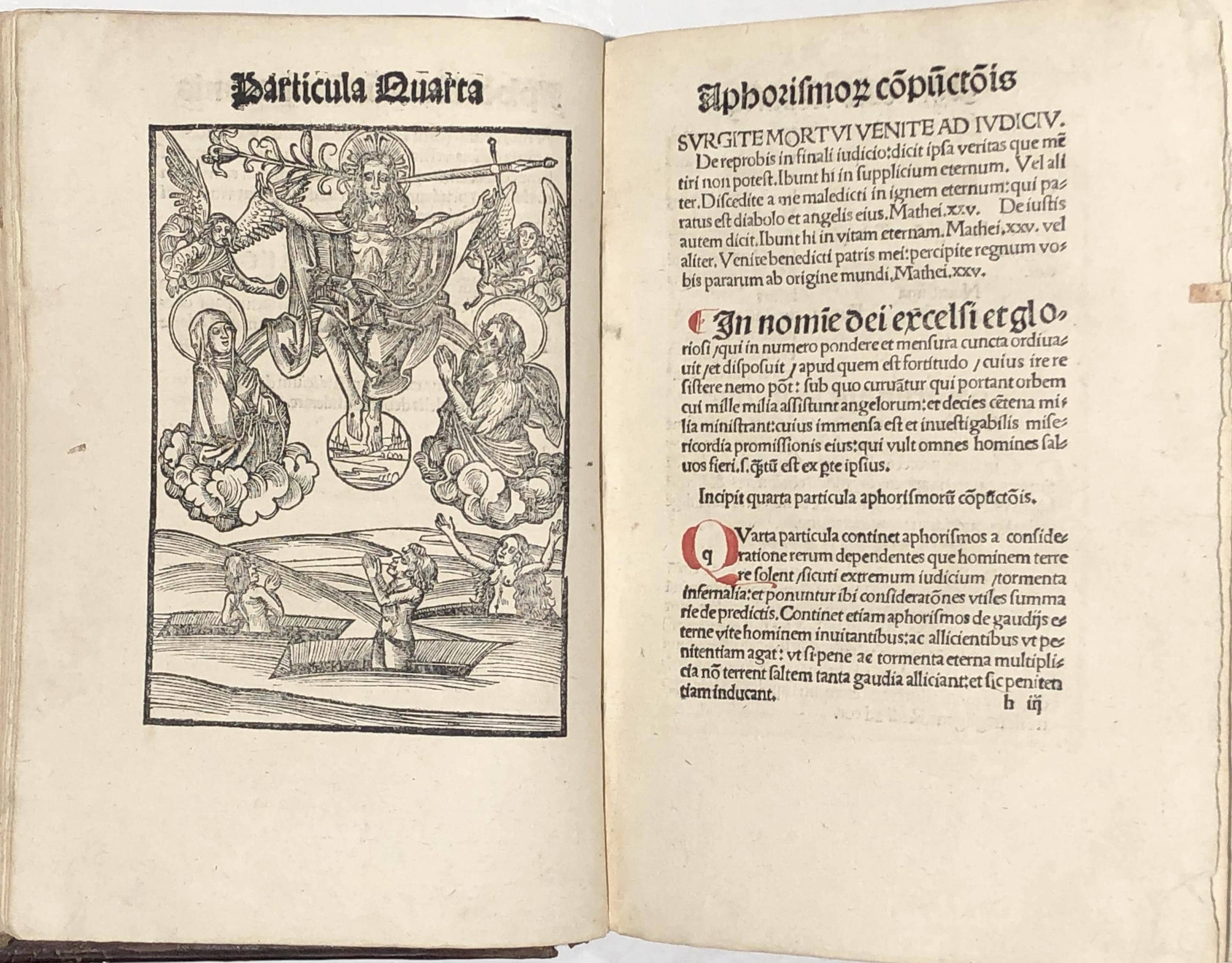 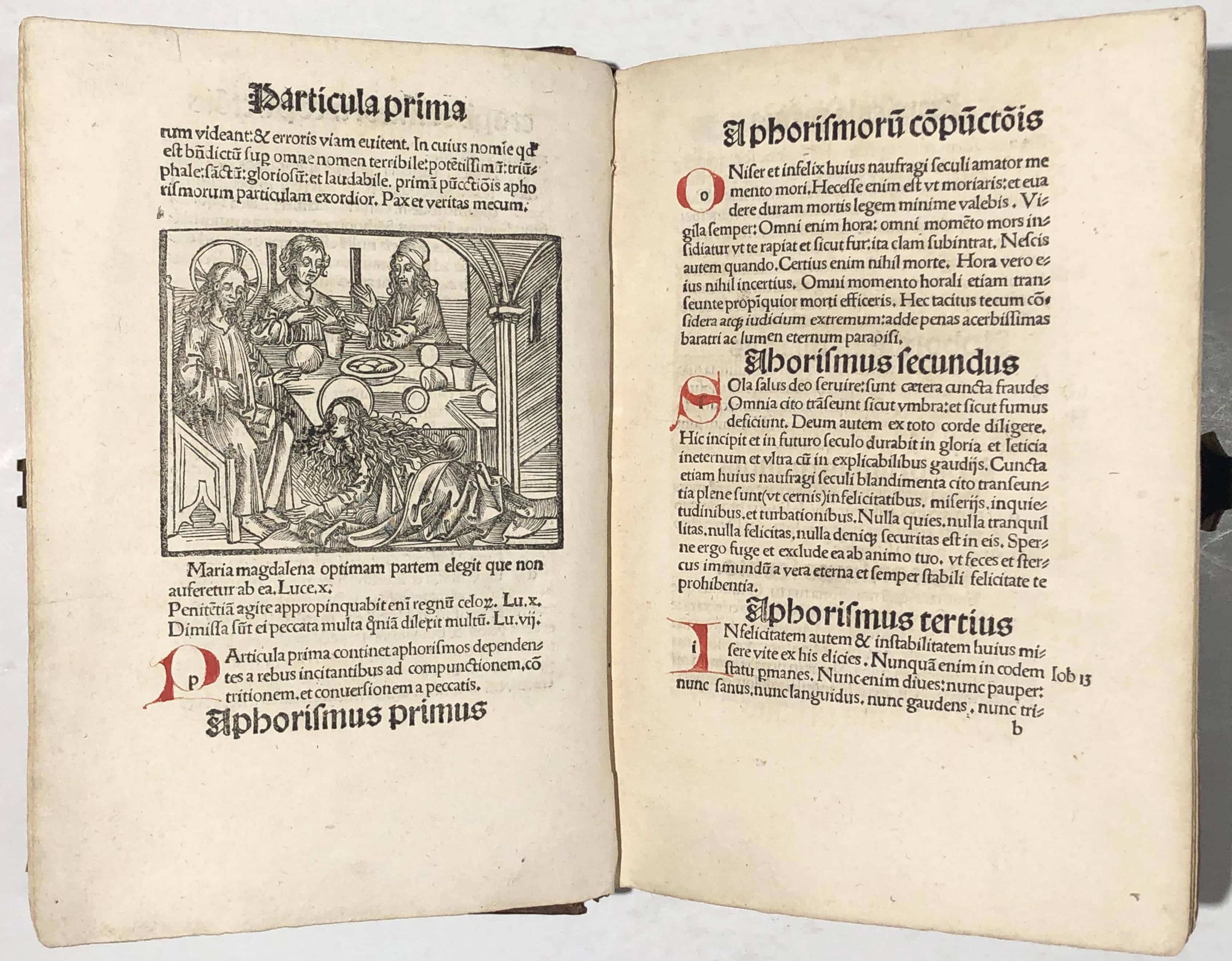 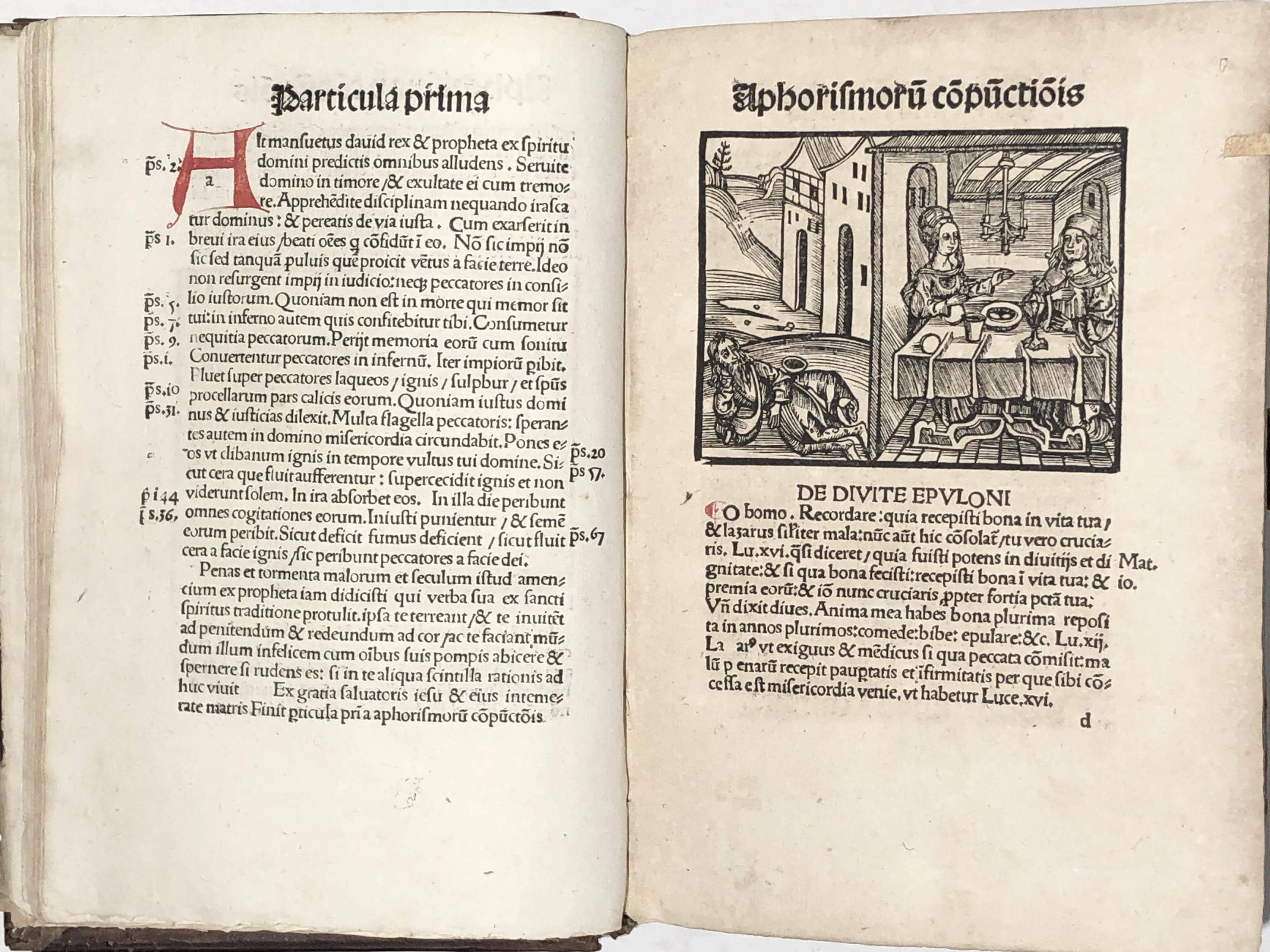 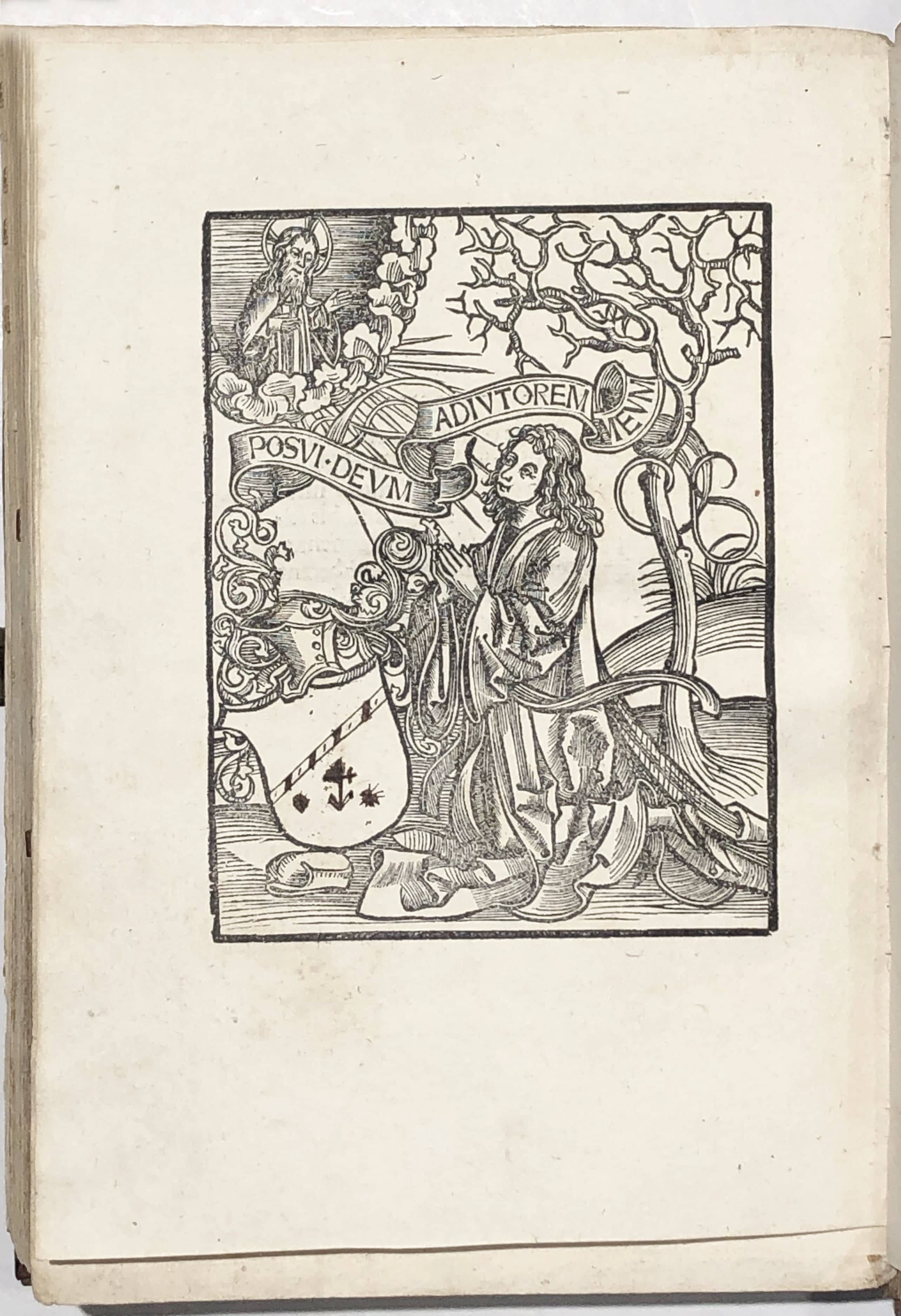 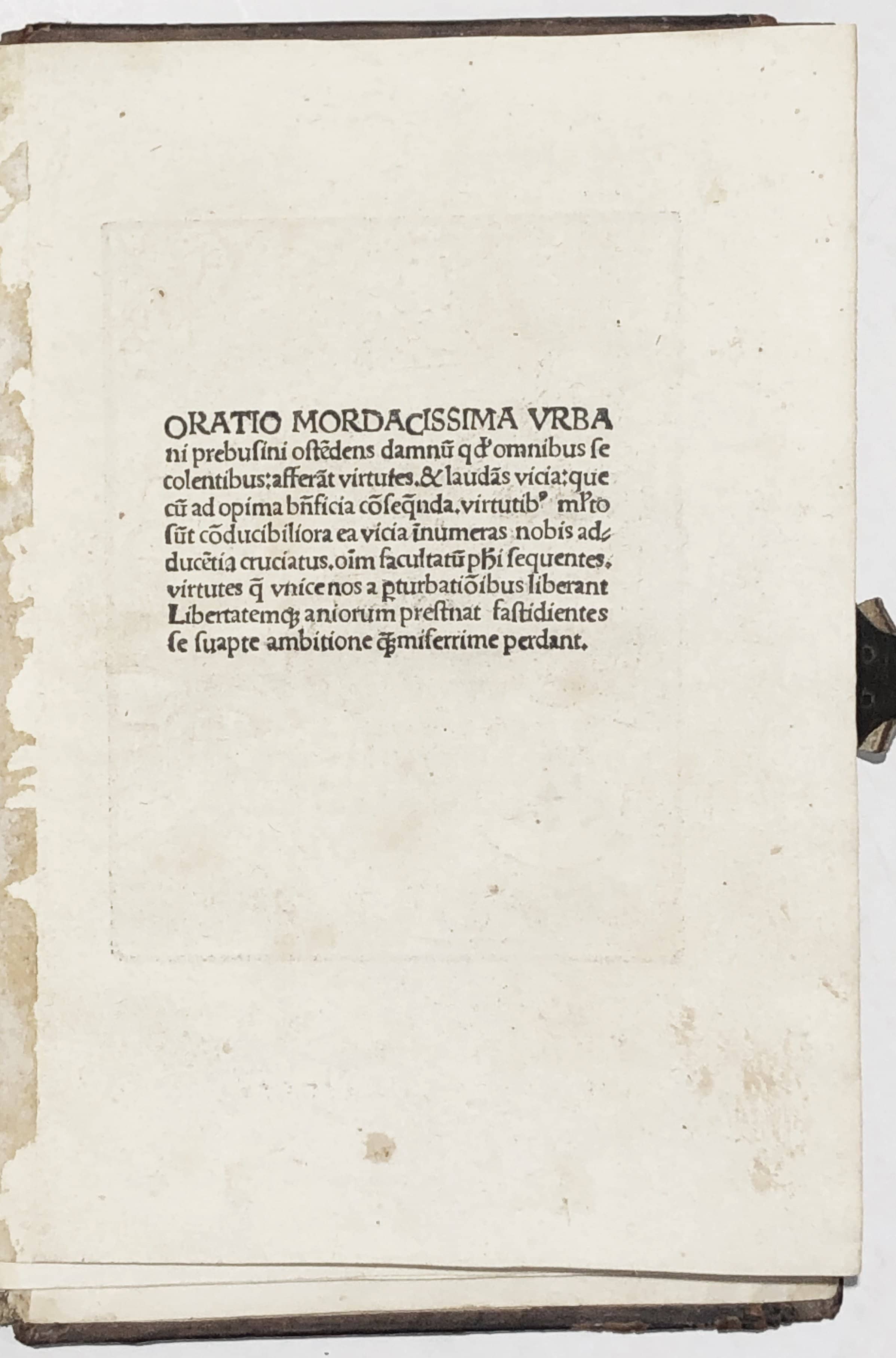 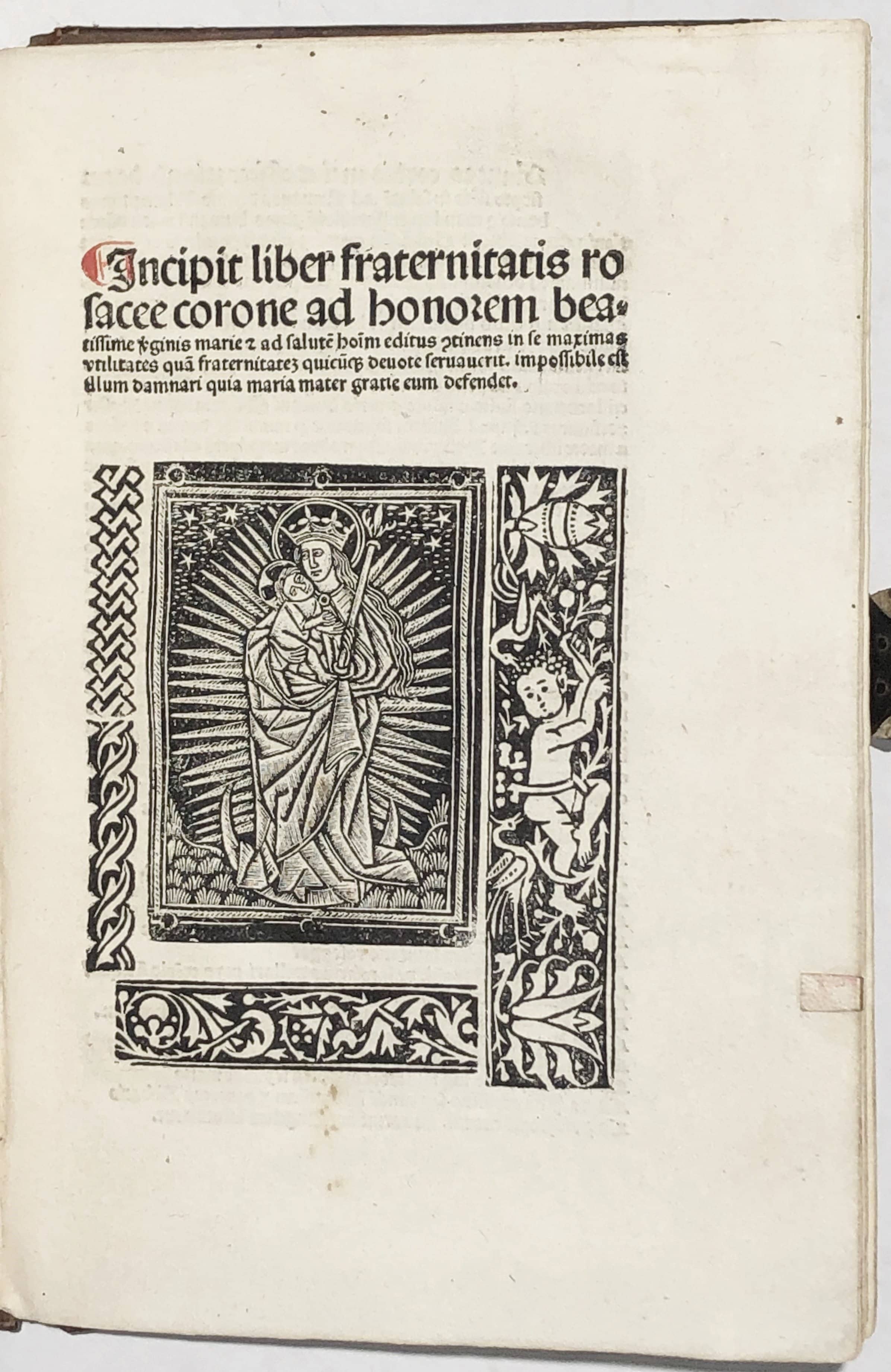 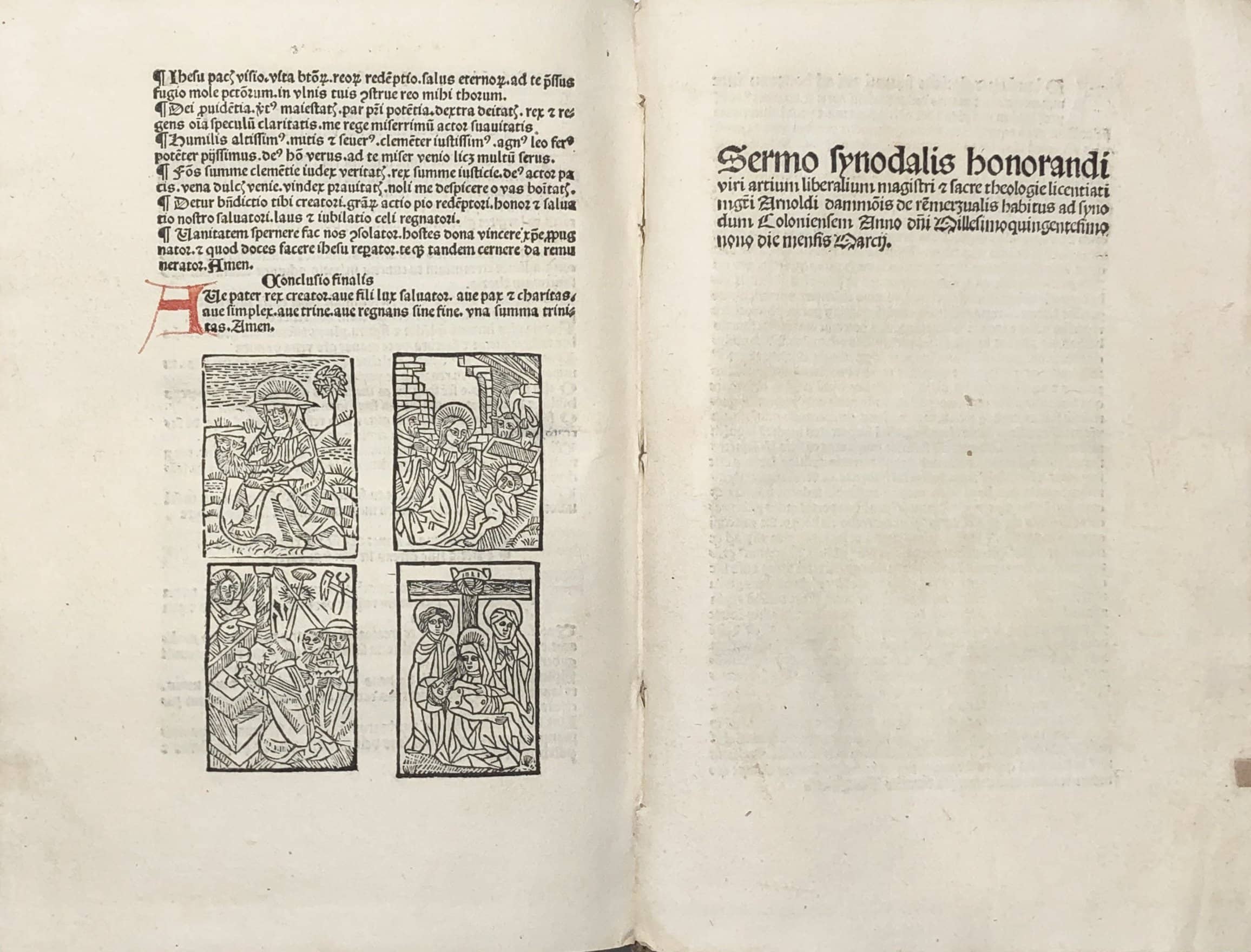 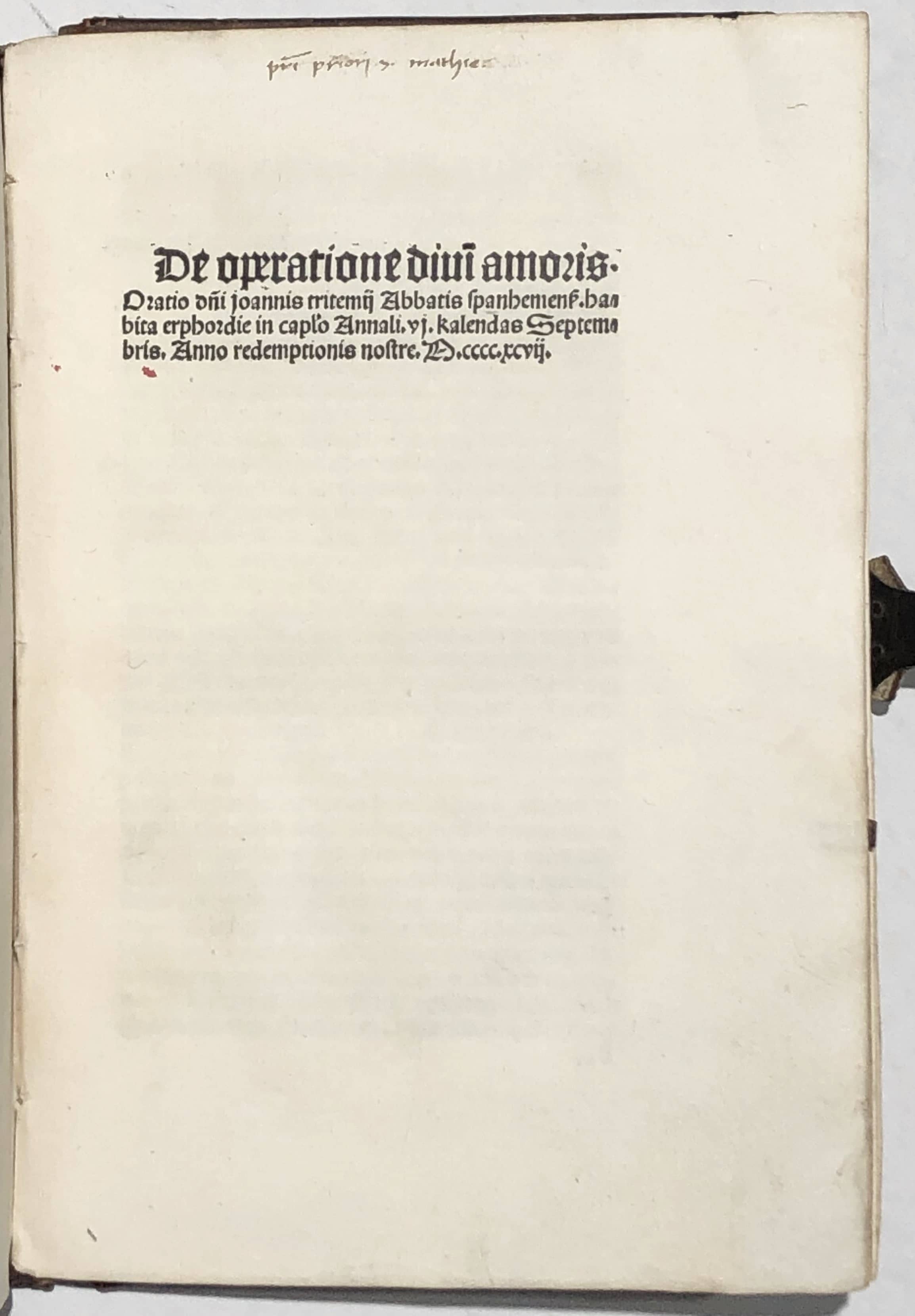 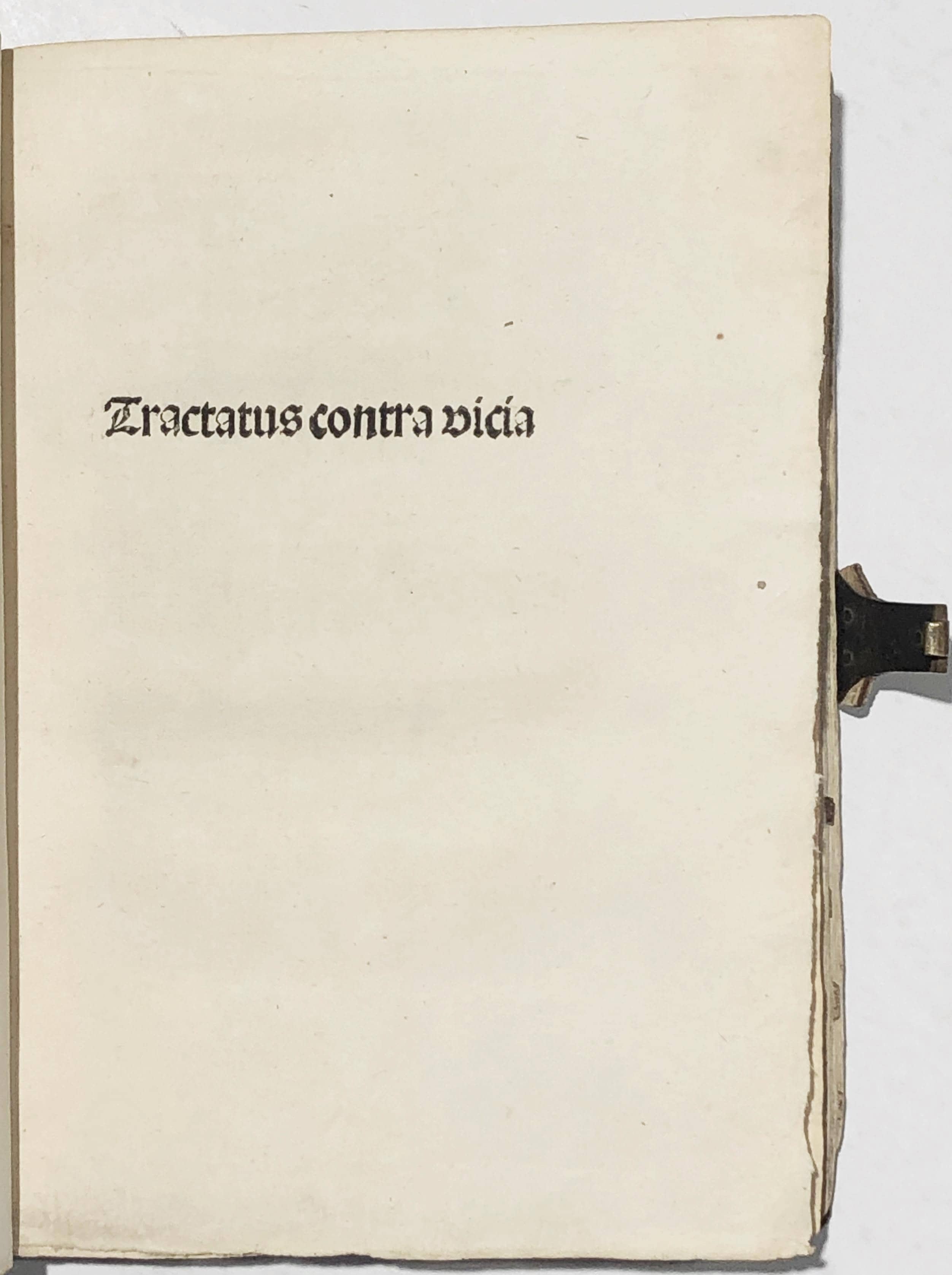 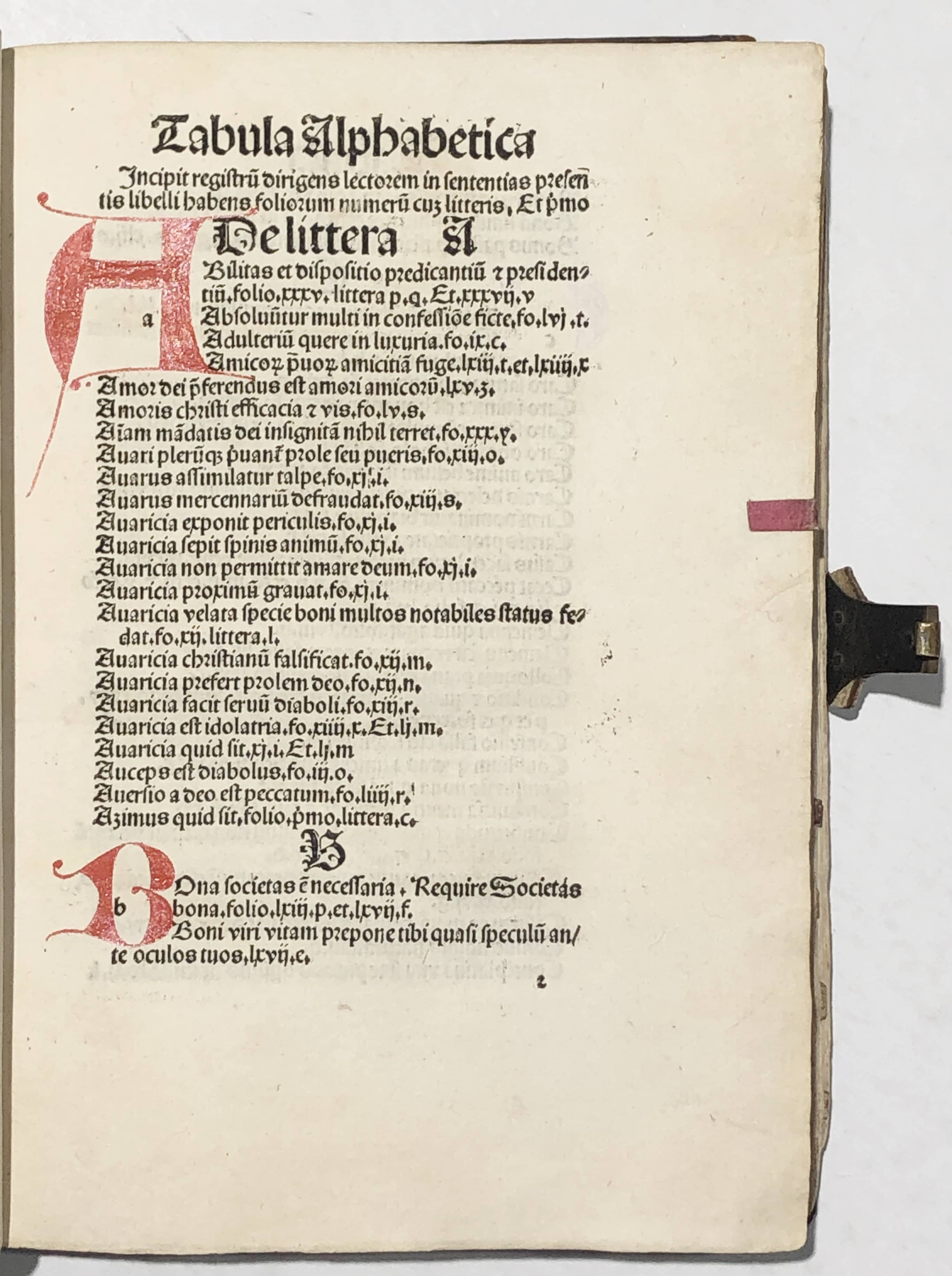 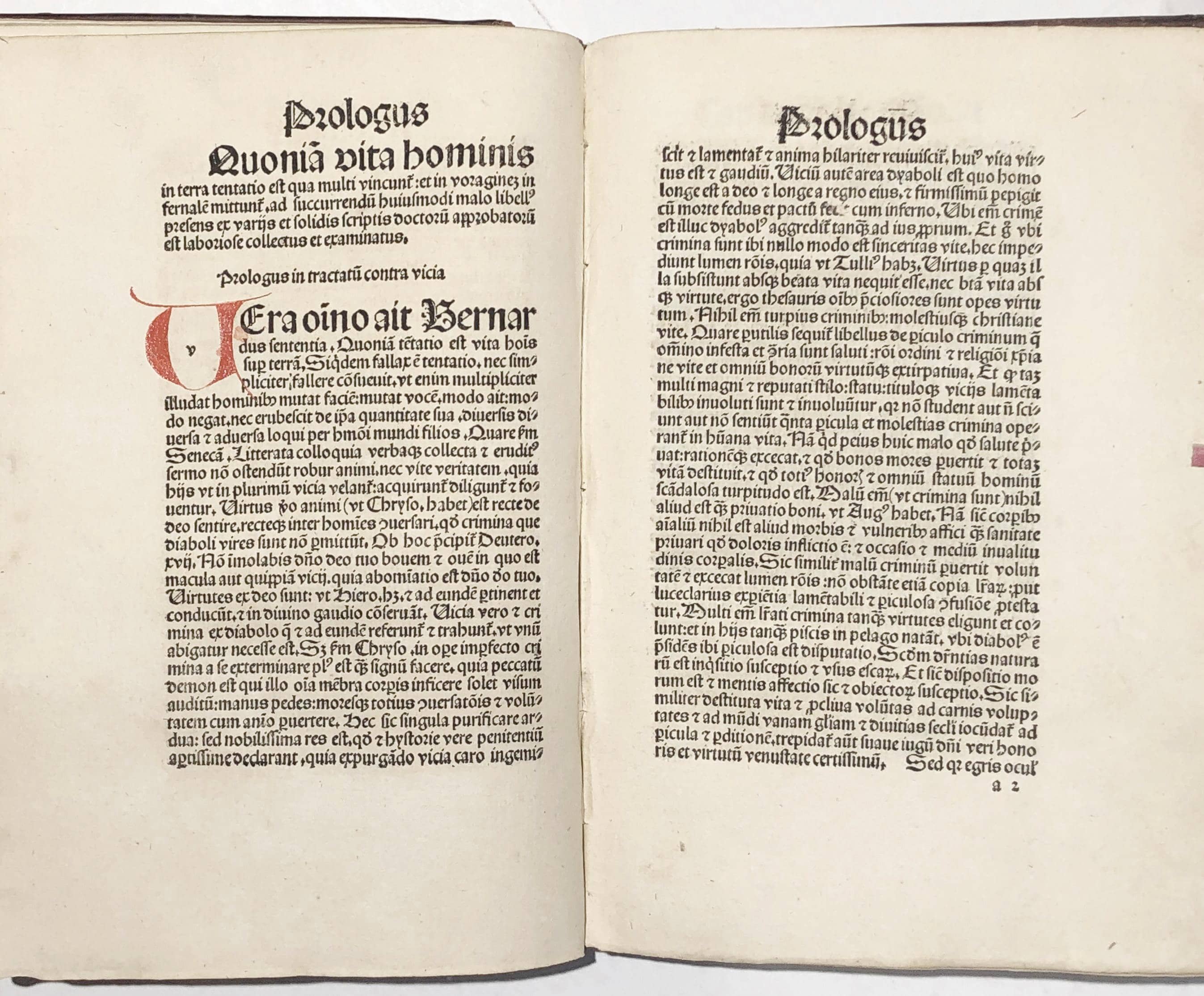 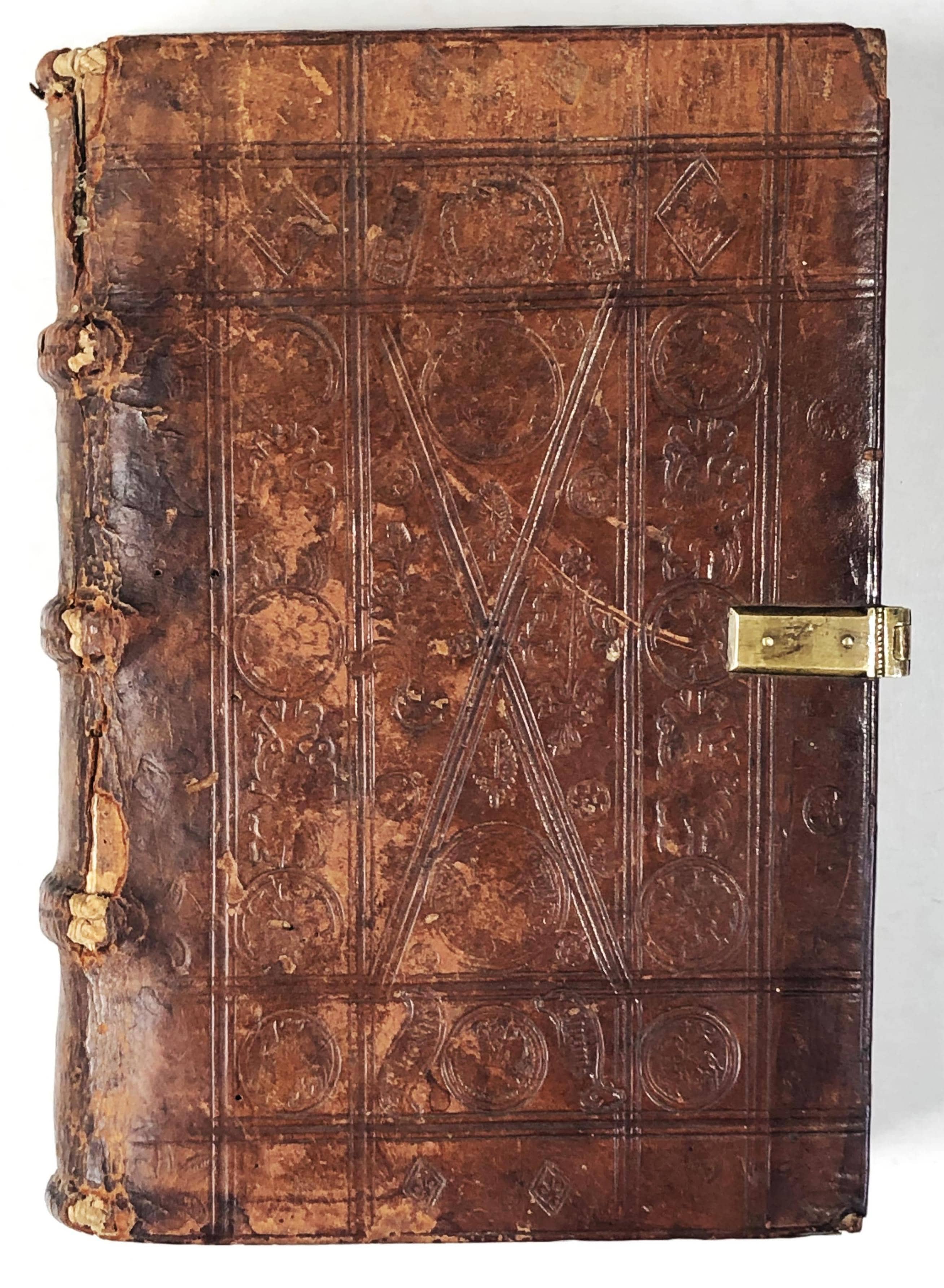 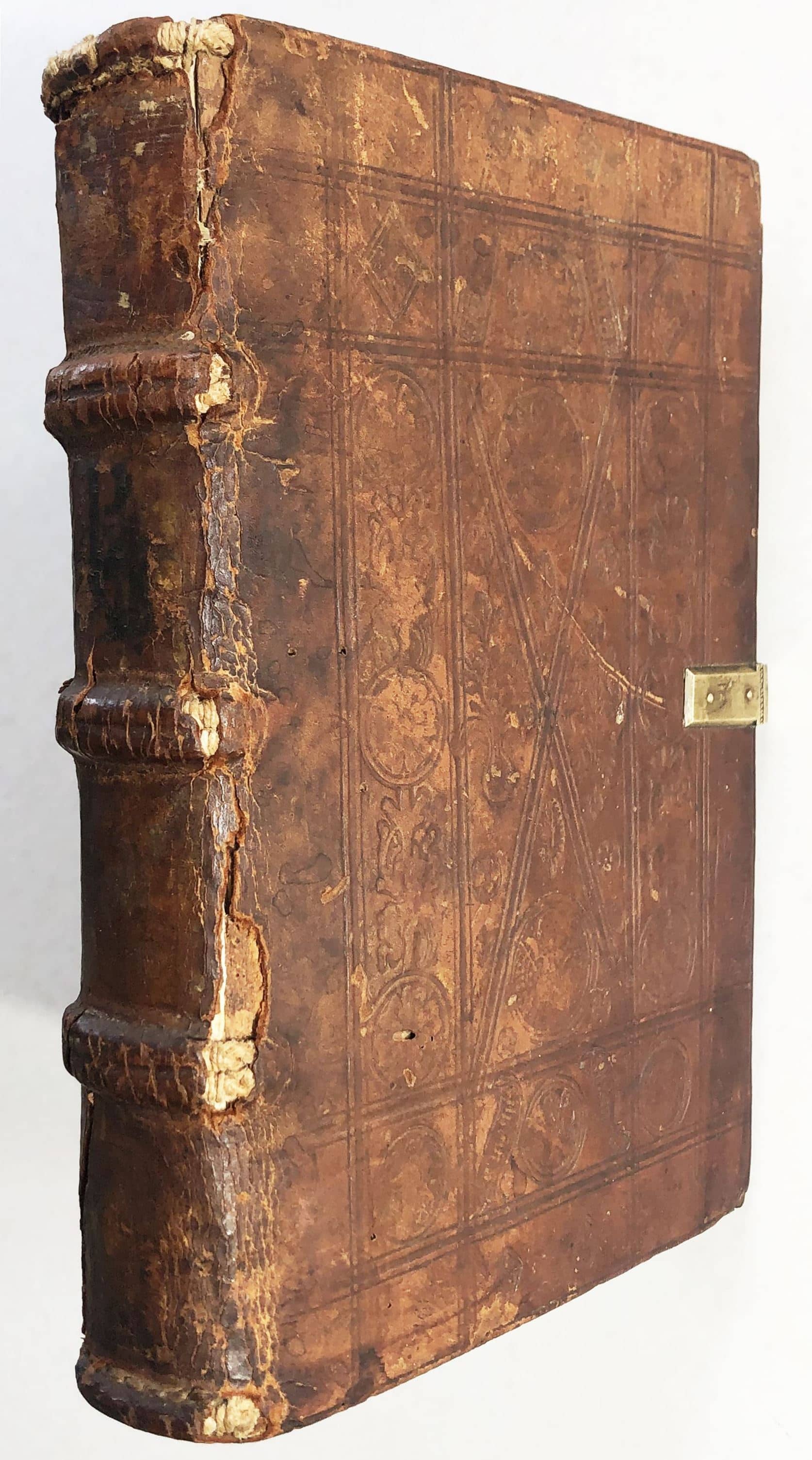