An exceptional, very important collection of unique designs, model drawings and photographs of automobiles by Mühlbacher in Paris, one of the most famous French coachbuilders of the late 19th – early 20th century.

Out of the 214 drawings, 14 are colored and 4 have foldable applications. All drawings are realised on thicker cardboard, most of them in red ink, some in pencil.

Most of the photographs are mounted as two on one page, some showing models by the same automobile (with closed and opened roof).

The late 19th century sees an incredible increase in the number of automobiles produced. Worldwide, the industry was flourishing and France was one of its pioneers.

Since it still took a reasonable amount of time and resources for cars to be produced and brought to the market, they were at the time a sort of luxury goods. Automobiles were seen as a mark of social status, and manufacturers profited from this. The most outstanding of car dealers and makers even opened shops on the famous Champs-Elysées in Paris.

Established in 1797 by Godefroy Mühlbacher, the Mühlbacher car house was present in Paris since 1814. In 1837, The Mühlbacher House opened a car shop on the boulevard Champs-Elysees. They had been known to be the court’s favorite car makers under Napoleon III. For over a century, this was one of the most flourishing French body shops. Over the years, the company changes its name from „Mühlbacher Fréres“ (1828-1863) to „Mühlbacher et Fils Paris“ (1864-1878) to „Mühlbacher. Paris“ (1879-1902) to „Mühlbacher et fils“ (1903-1911) until it dissolved in 1927 when it was bought by Belvalette.

Within this collection, some of the designs have contemporary handwritten attributions, so some of the automobile drawings can be attributed to certain manufacturers: 1 design for each of the following: Dion-Bouton; Dietrich; Renault; Mercedes and Rochet-Schneider; 3 designs for Delahaye and 3 designs for Panhard, and further 5 drawings for early Krieger electric cars.

An entire album of the collection with 53 designs is dedicated to model drawings of coachworks for C.G.V. Automobiles Charron, Girardot & Voigt SA (C.G.V.) was a motor manufacturer founded by racing drivers Fernand Charron, Léonce Girardot and Carl Voigt and only existed from 1901 to 1906. They opened one of the first French car dealerships in 1897 in Paris and showed their first car in 1901. Their reputation was based on an exquisite and distinguished clientele (among which we count many members of European royal families), and their success led to the opening of branches in the U.S., which became known as the „American CGV“. Despite their success, the partnership broke after less than a decade from showcasing their first automobile, with its members choosing different career paths. This collection of model drawings for C.G.V. automobiles is probably the largest in the world.

Some of the designs are custom made to various people: Mr. Pinard – most likely Adolphe Pinard (1844-1934), Mr. Gontaut-Biron and G. de Ganay, whose names appear on the drawings.

Many of the drawings have a paper label inscribed „Mühlbacher / Paris – 63 Avenue des Champs-Elysées“ (before 1903), only very few of them bear a signature or stamp of „Mühlbacher et fils“ (1903 and later), and most of the (earliest) designs have no label at all. All of the drawings date from around 1890-1905. Many of them mention the horsepower of the automobiles; most often these range from 4, to 6 or 8, sometimes 12, and the C.G.V. cars all have 15, except one automobile with 40 horsepower.

This incredible and unique collection offers a comprehensive view on the looks of some of the earliest automobiles. They are all unique designs, which form an unparalleled picture of one of the most charming periods in the history of autombile design.

We were only able to locate a single other automobile model drawing by Mühlbacher, in the property of the Cooper Hewitt collection of the Smithsonian Design Museum in New York, which they acquired in 1960.

This is certainly a unique opportunity to acquire one of the largest existing collections of early automobile designs.

Condition: The bindings of the 5 volumes are rather damaged and have missing parts, the cardboards from 2 albums are loose, some of the photographs are slightly faded; the drawings and photos themselves are in very good condition. 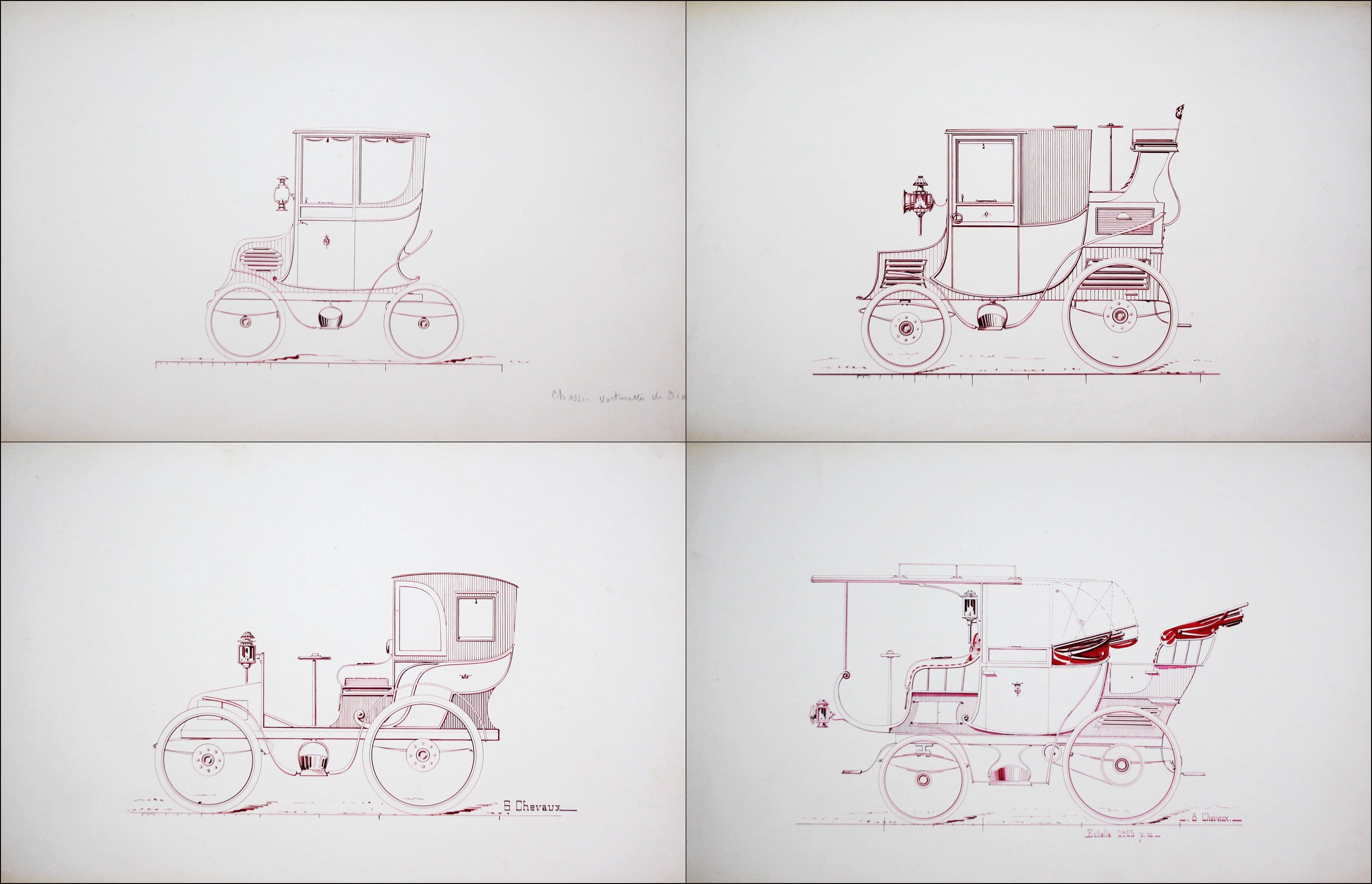 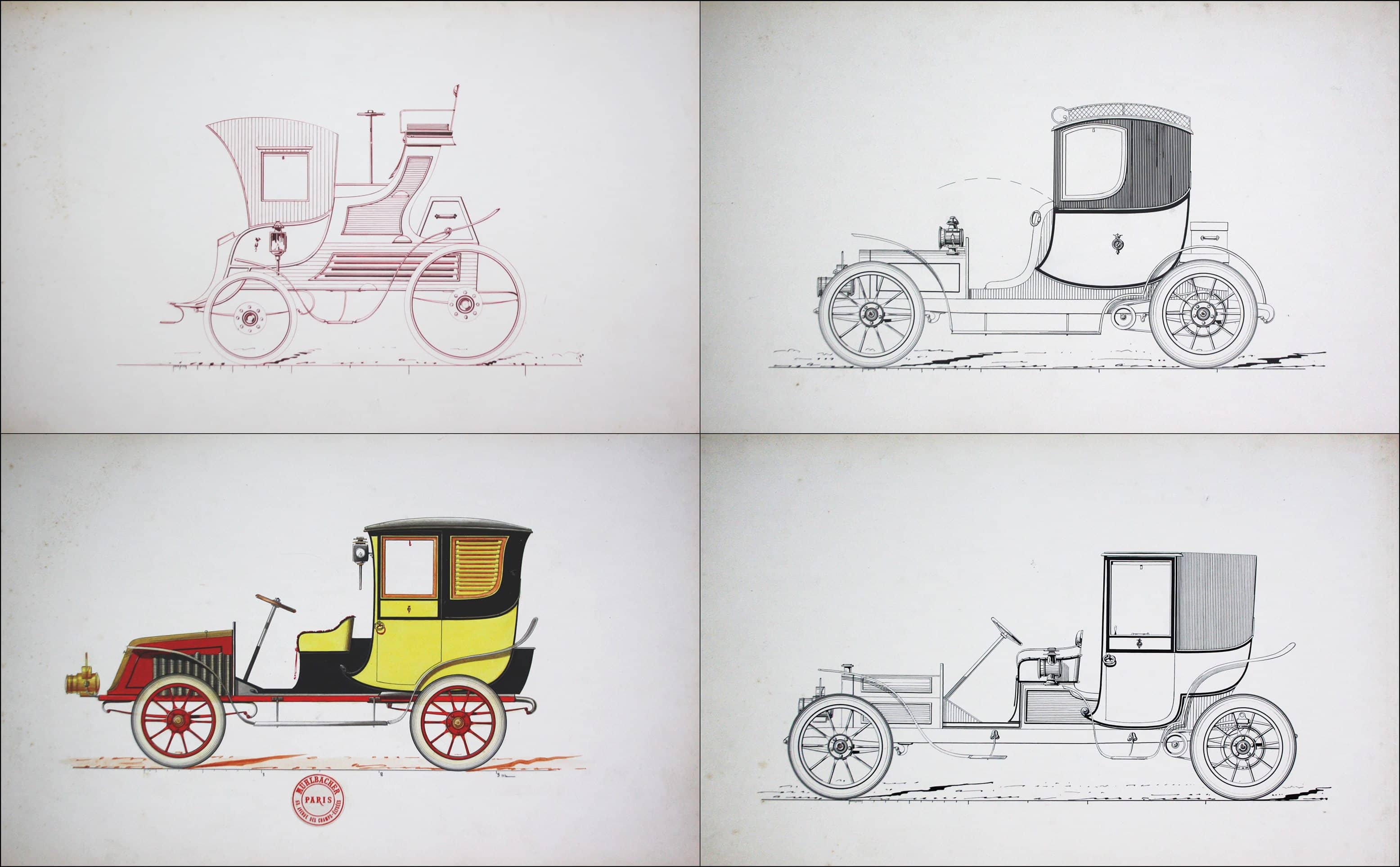 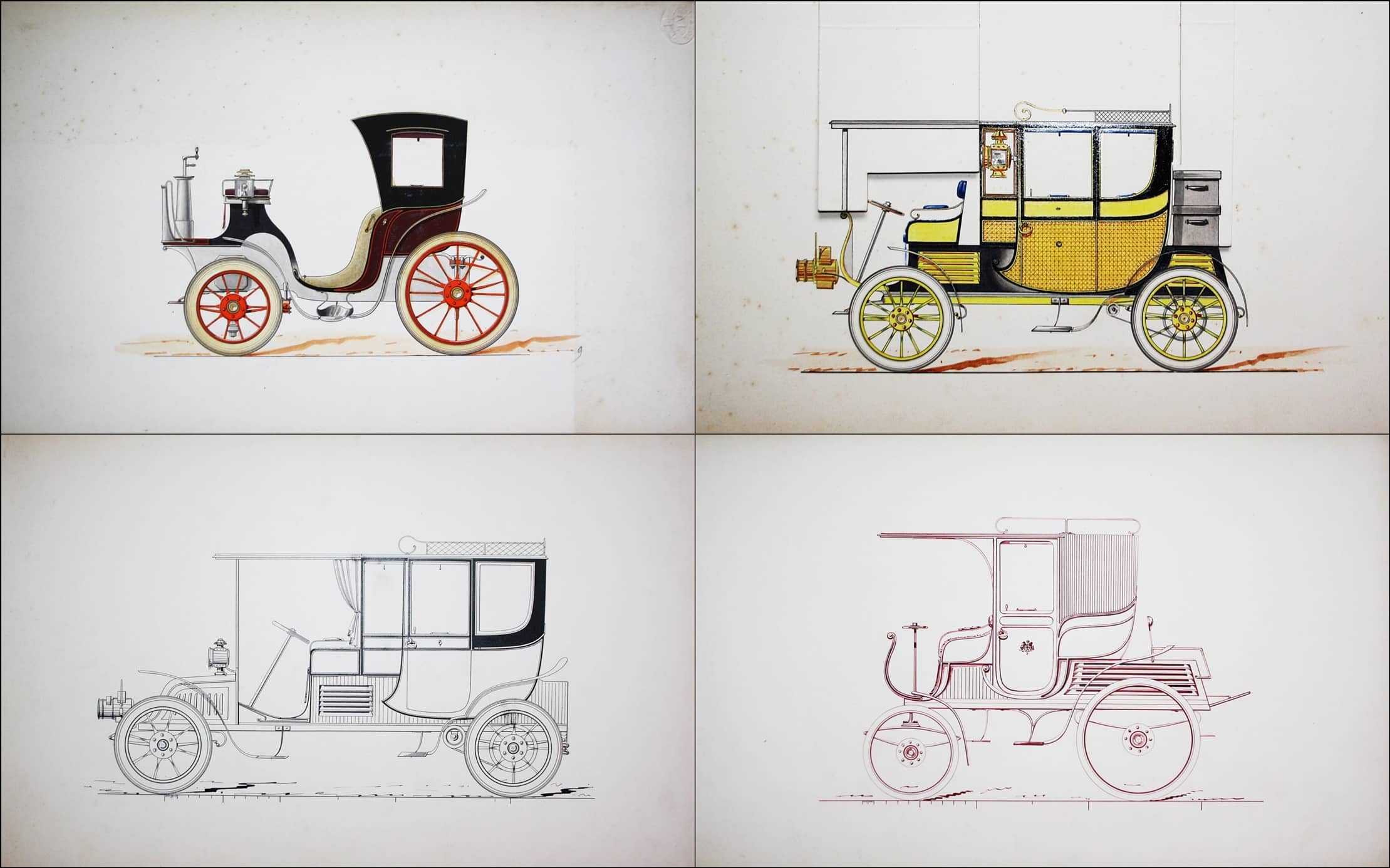 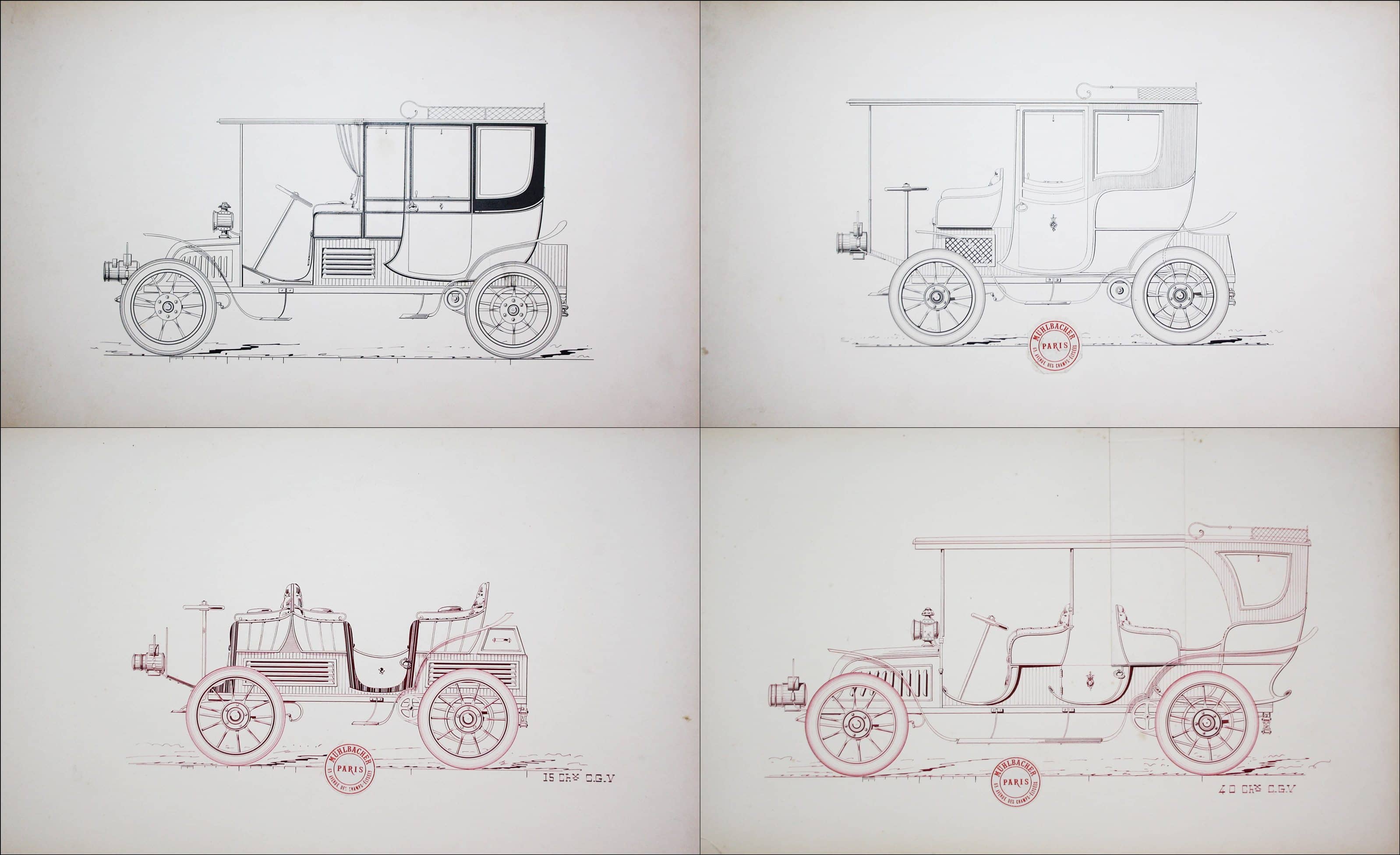 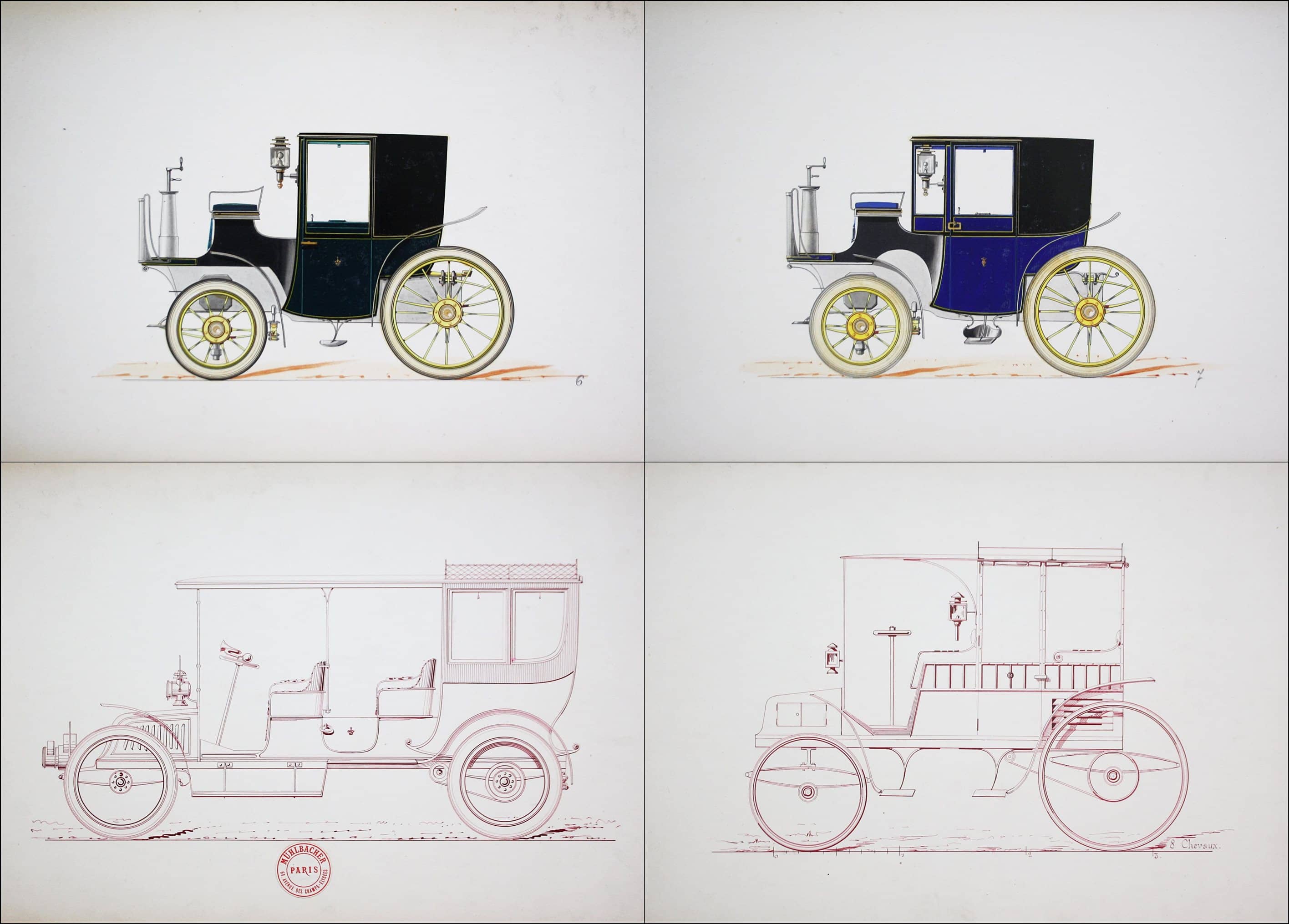 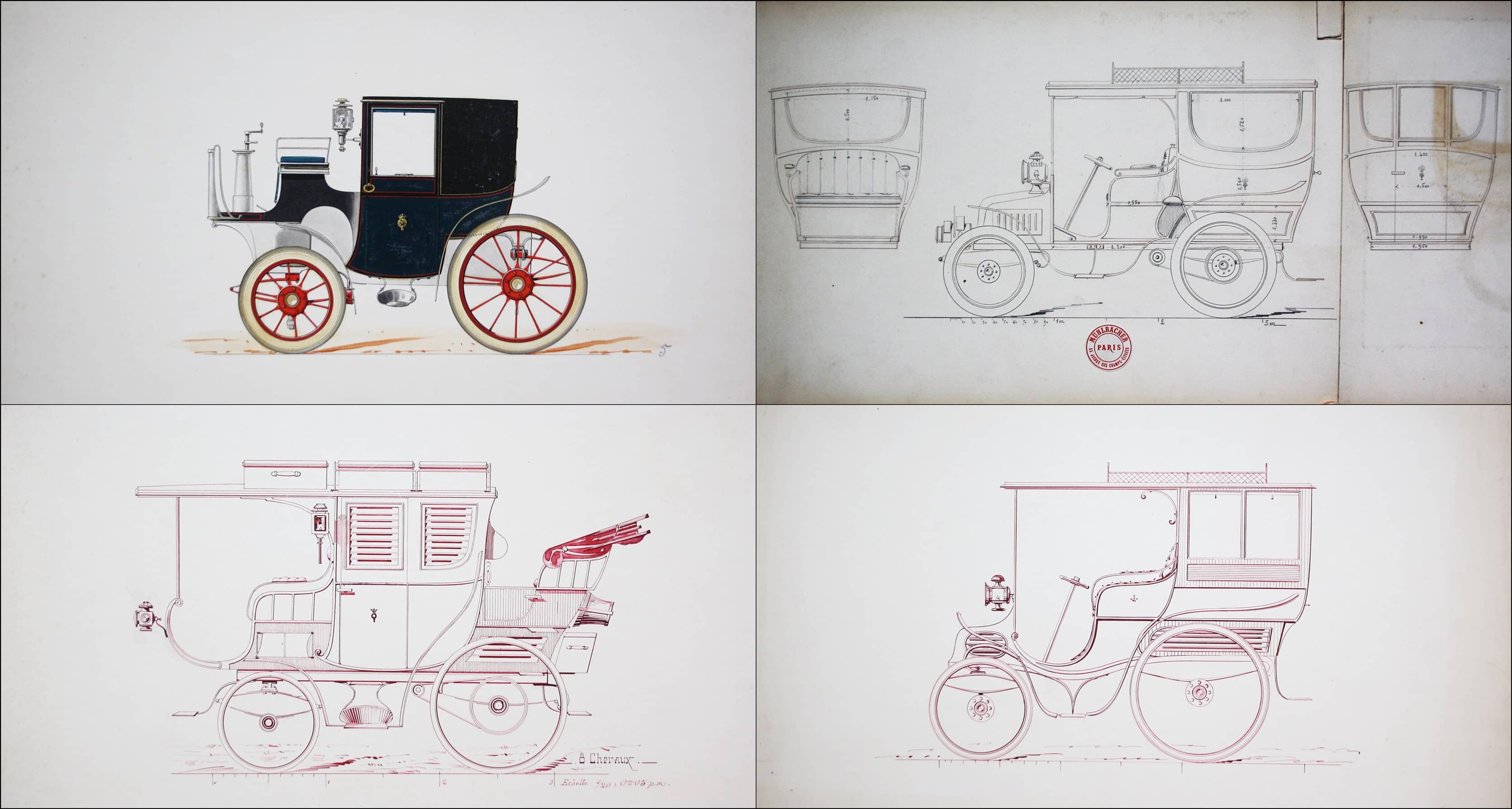 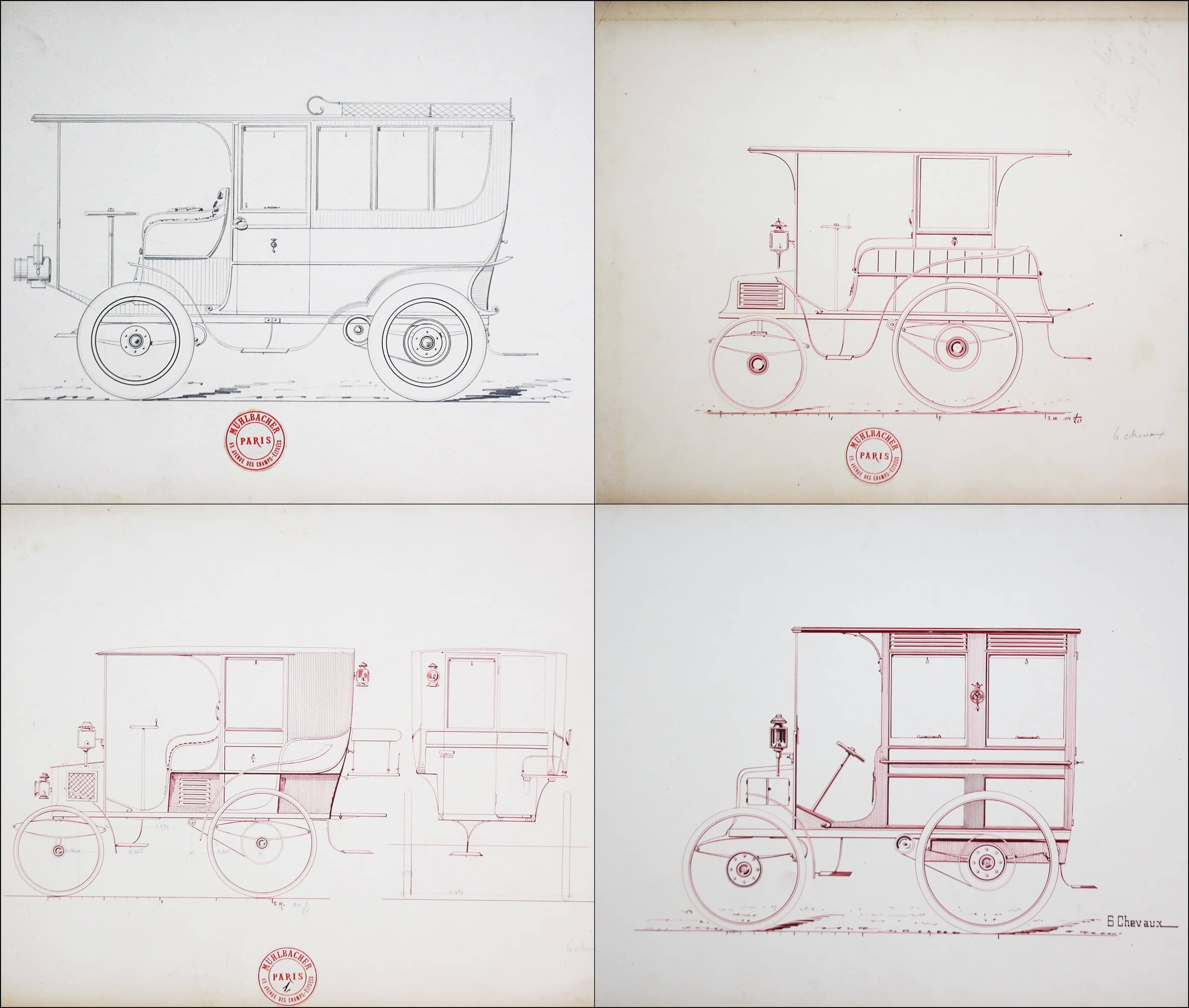 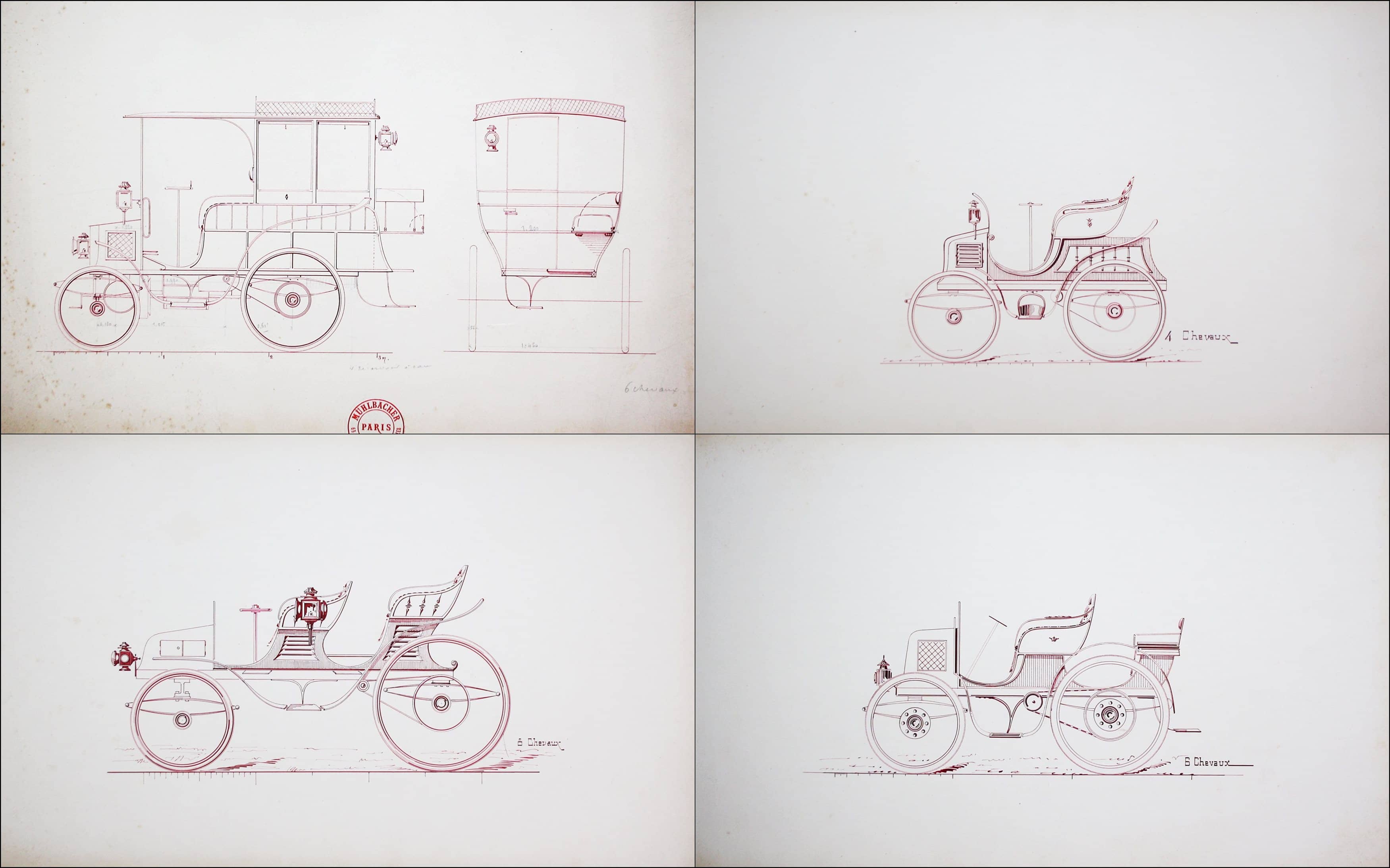 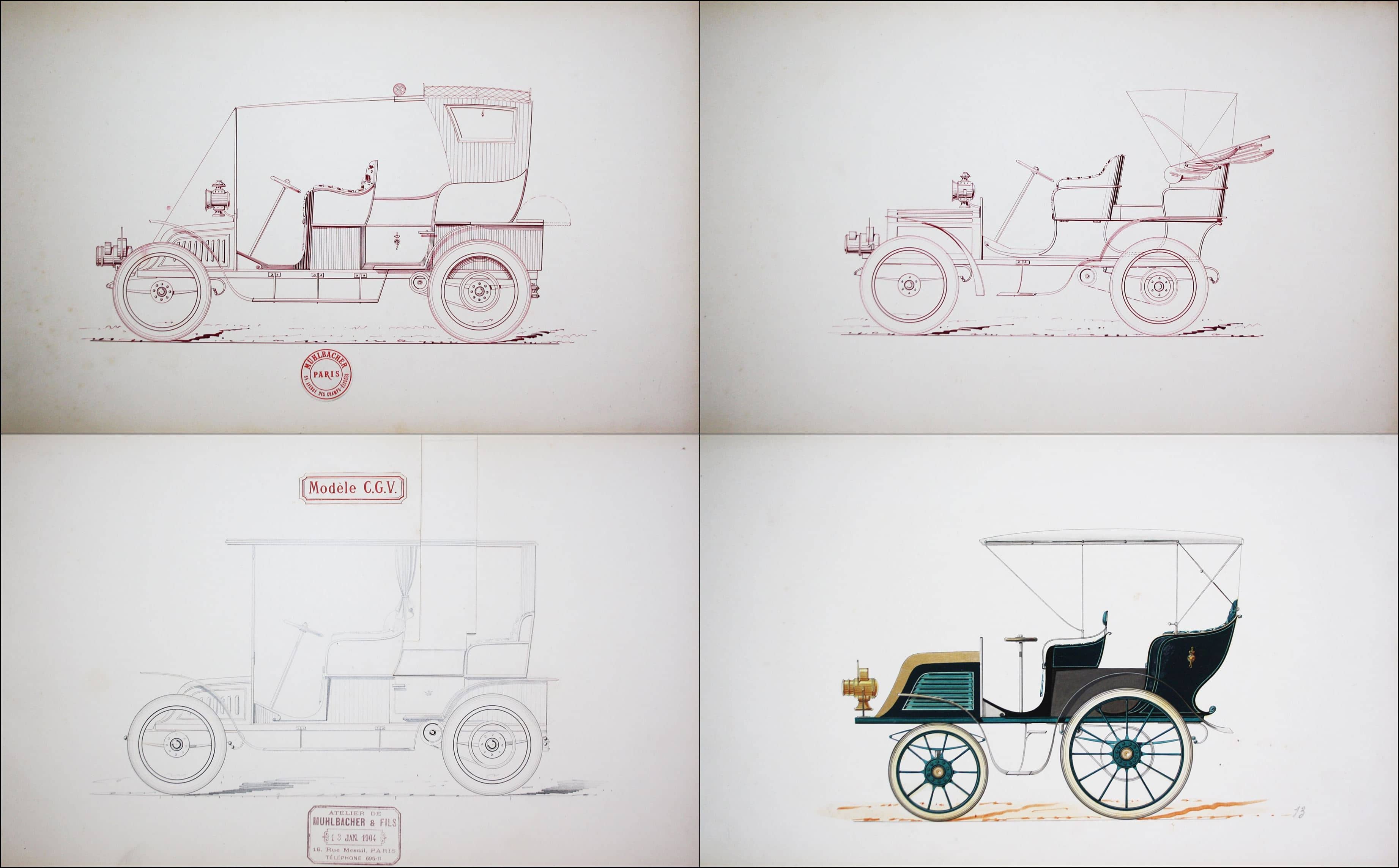 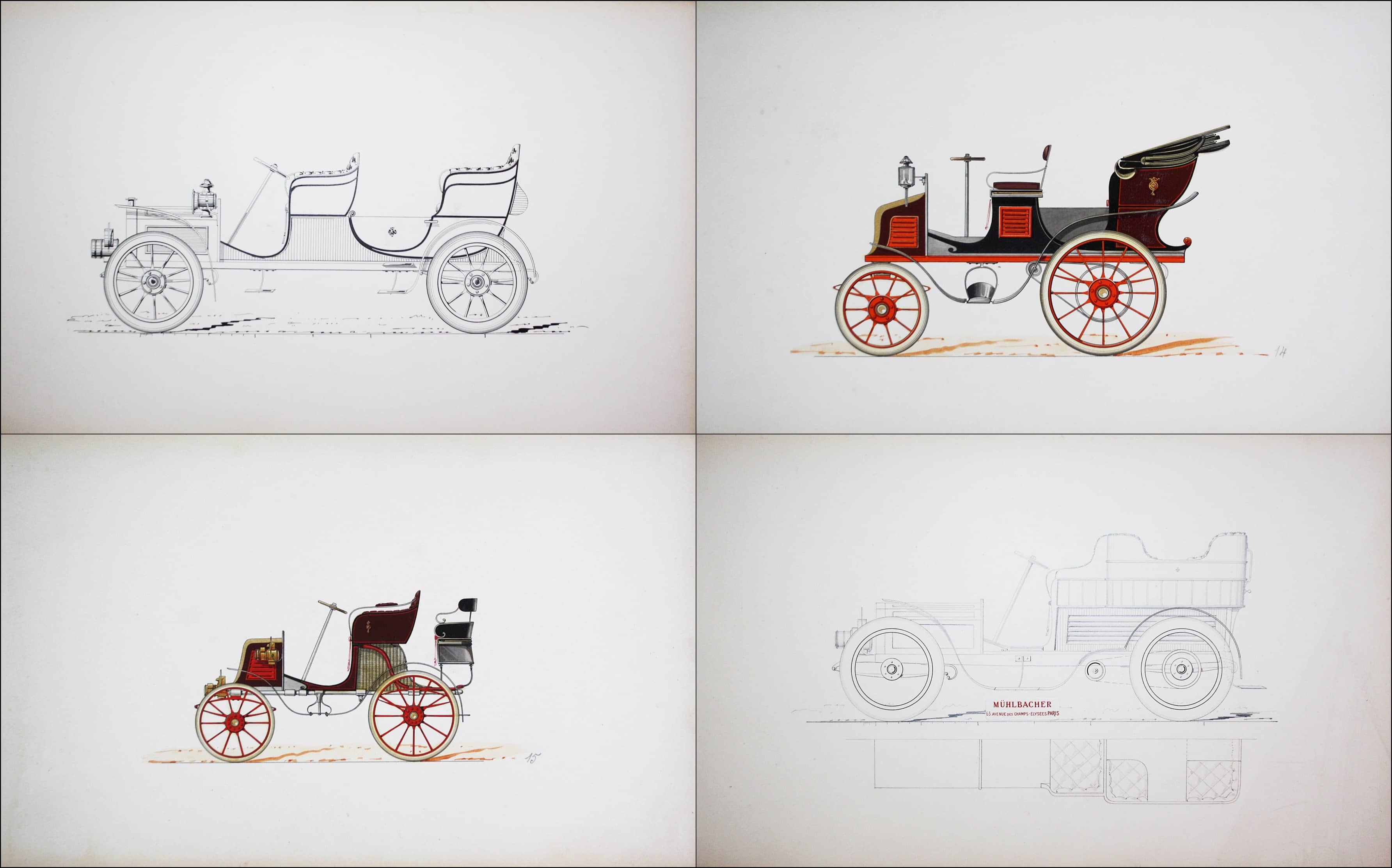 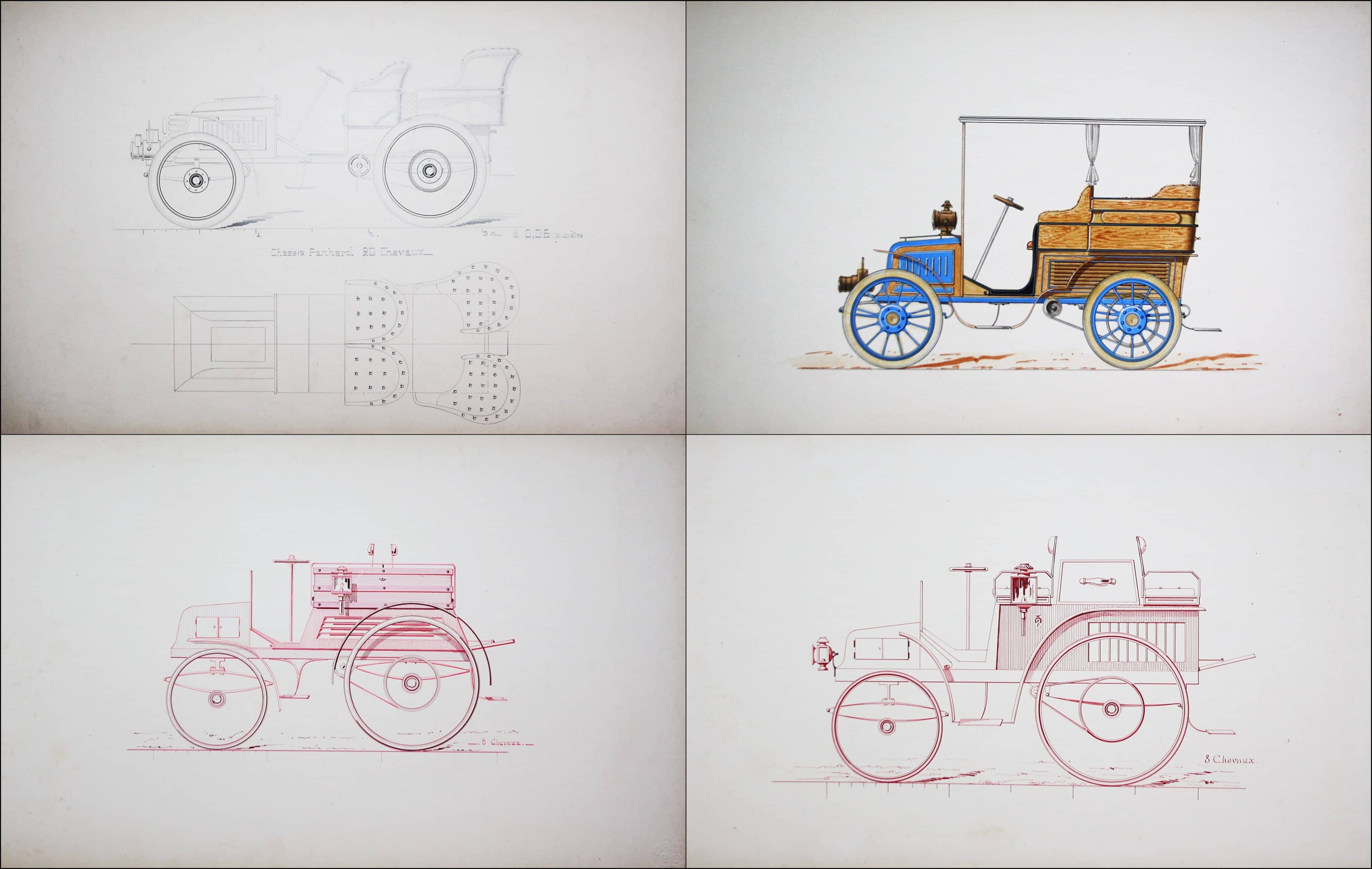 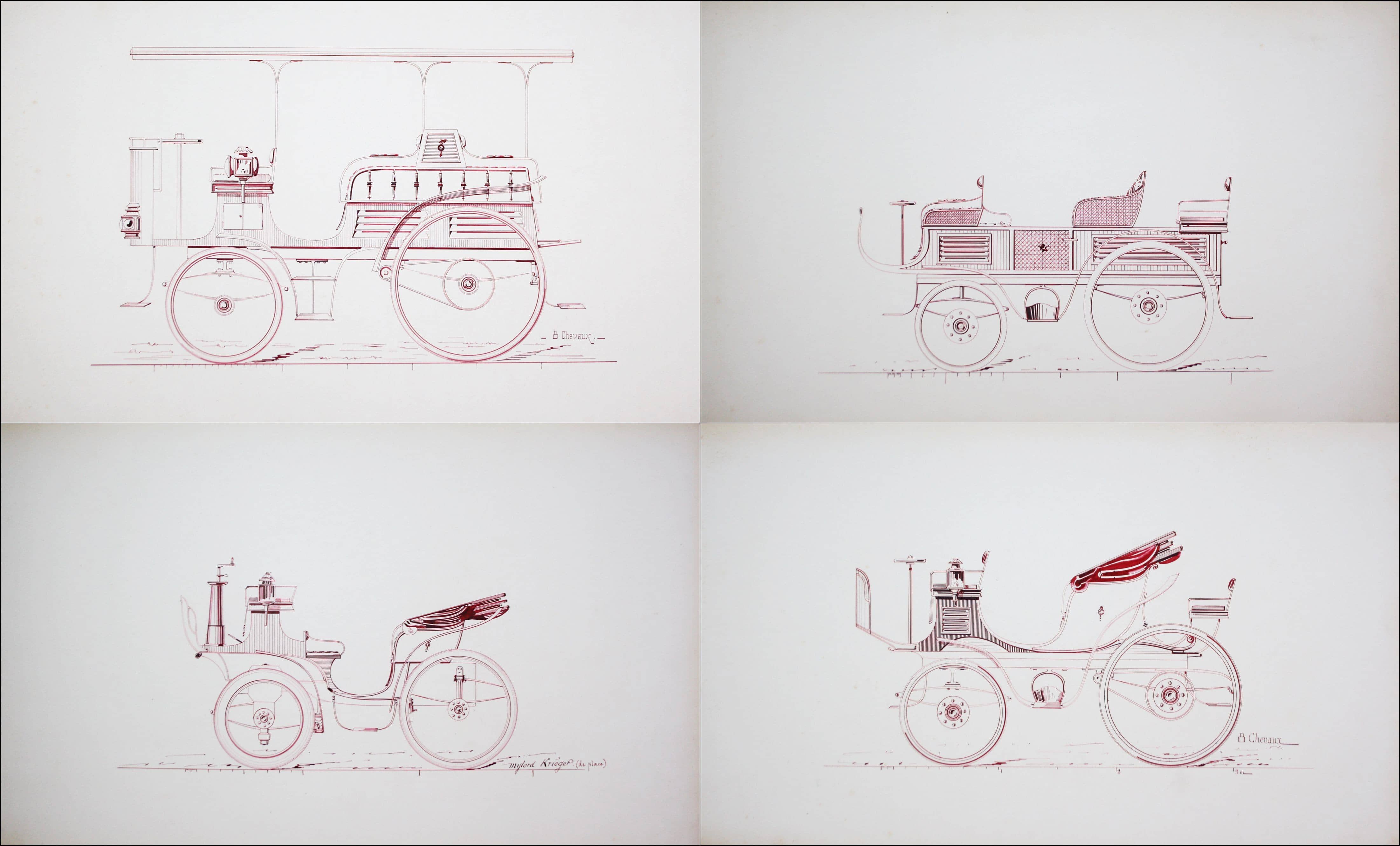 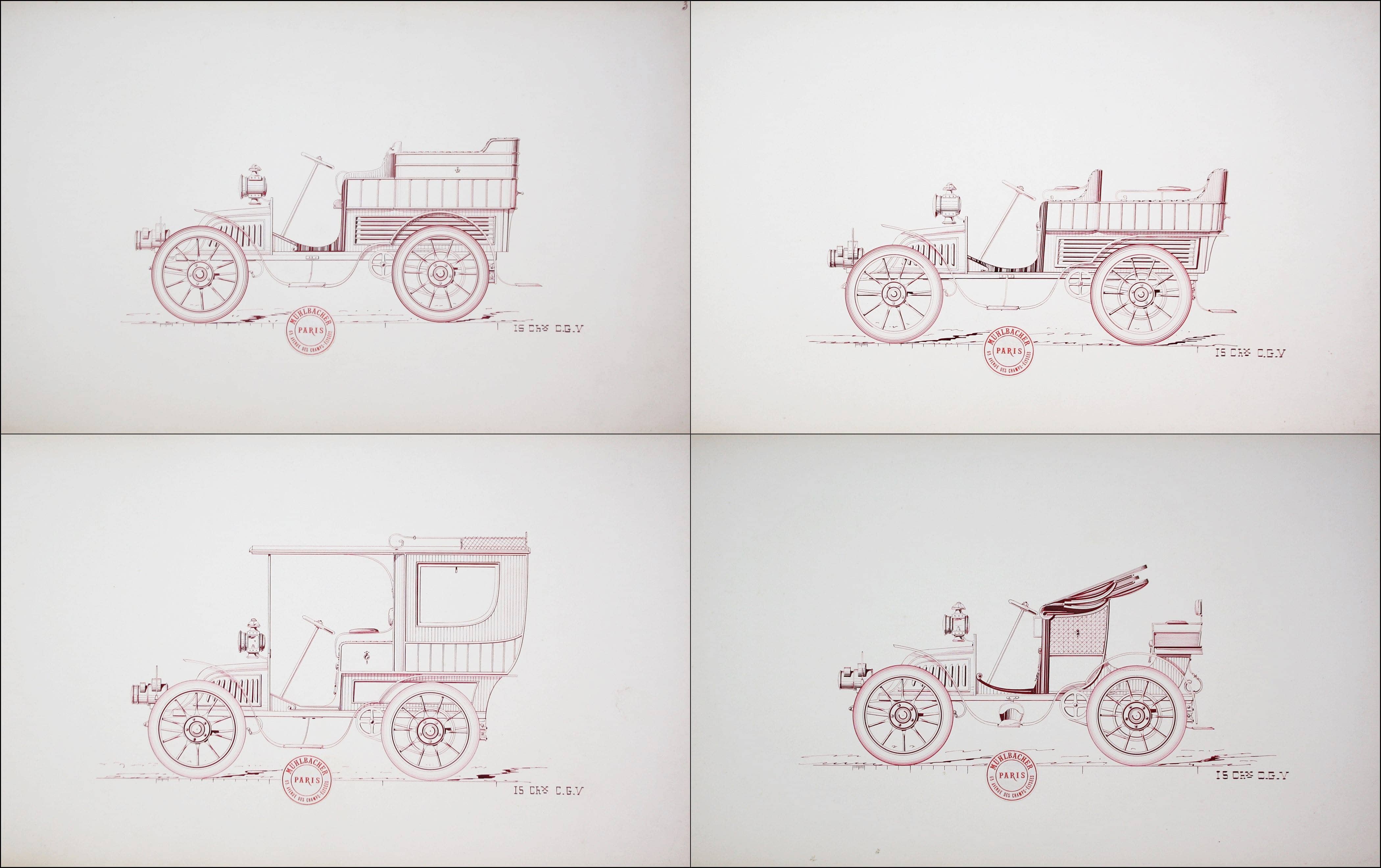 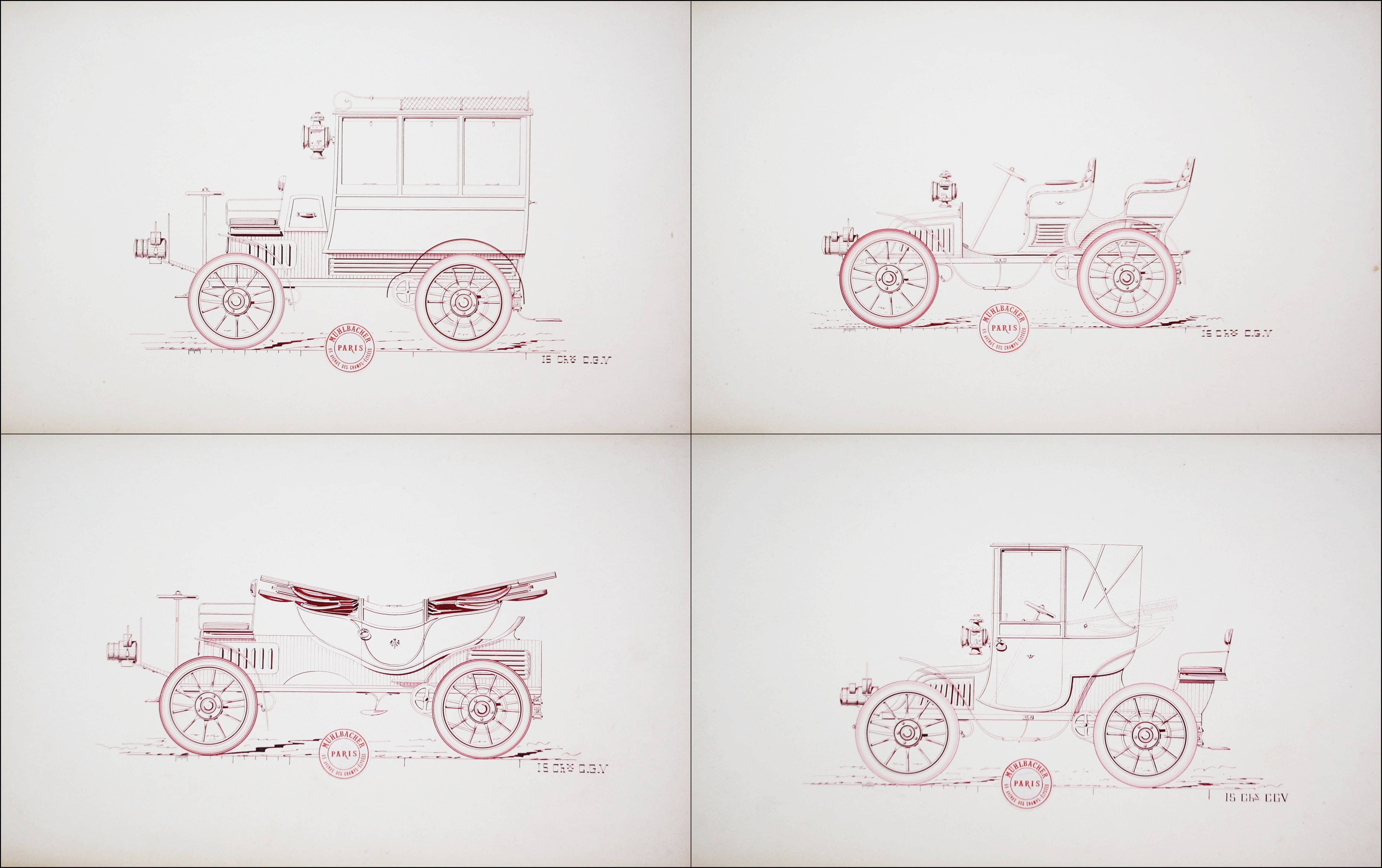 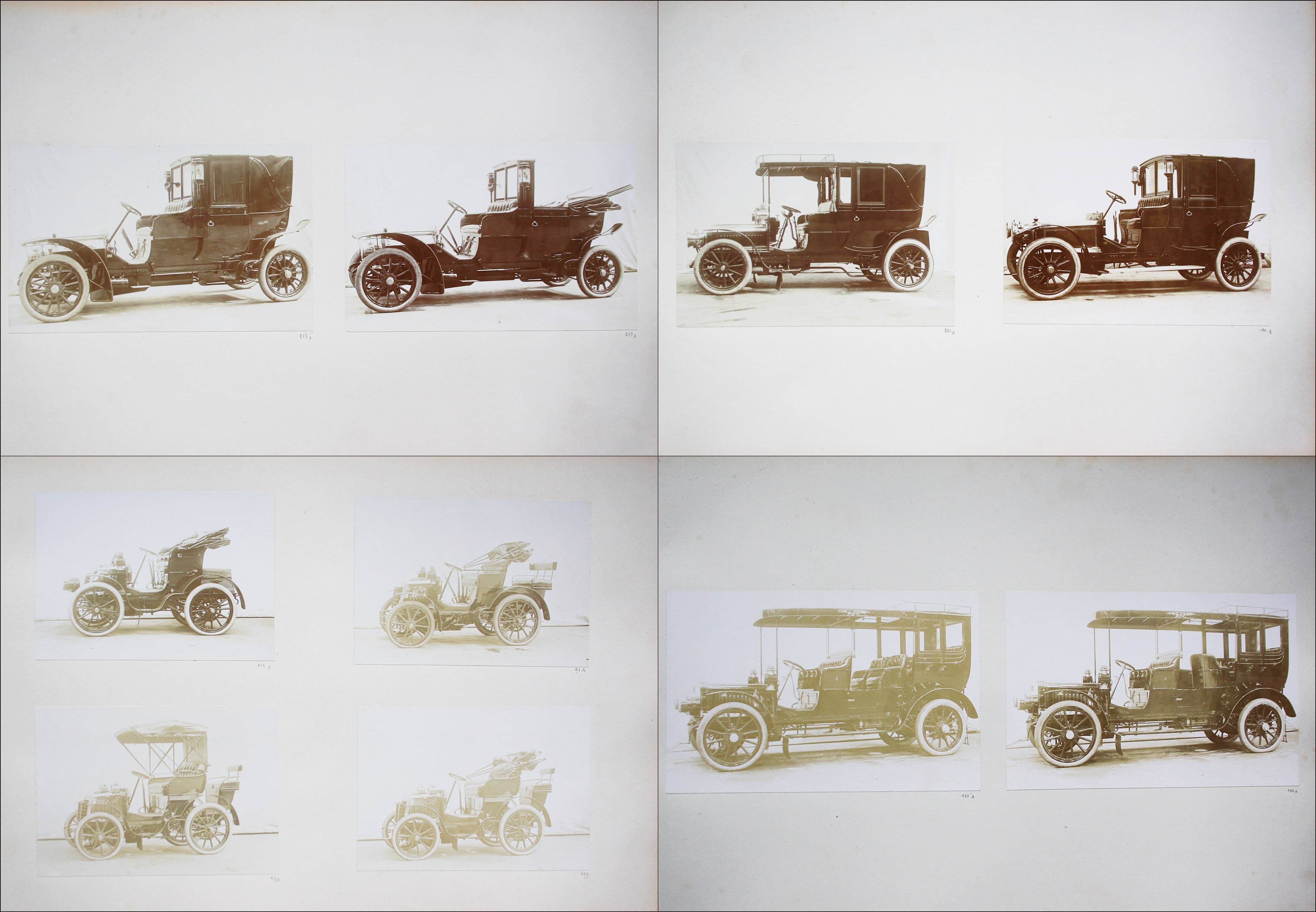 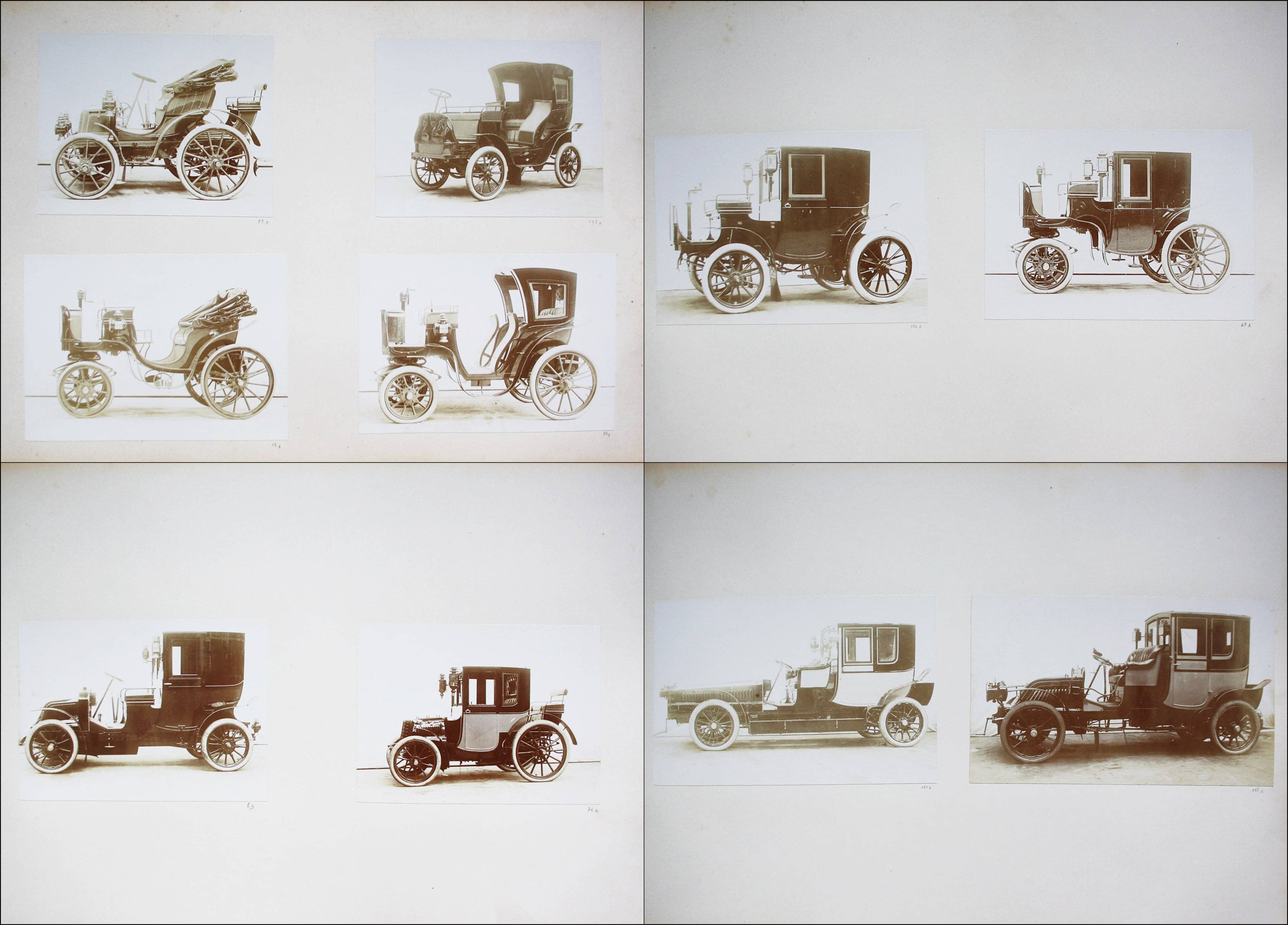 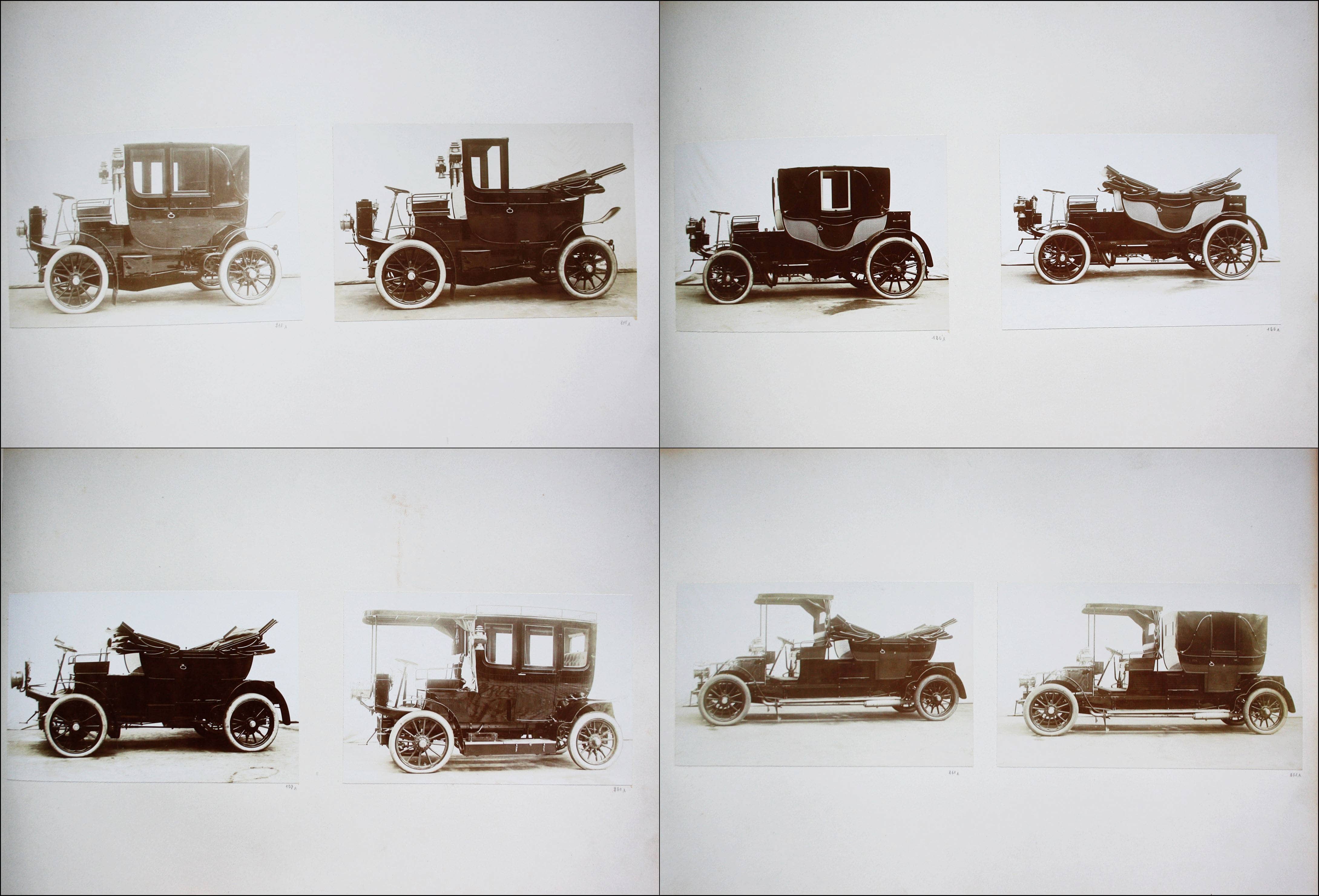 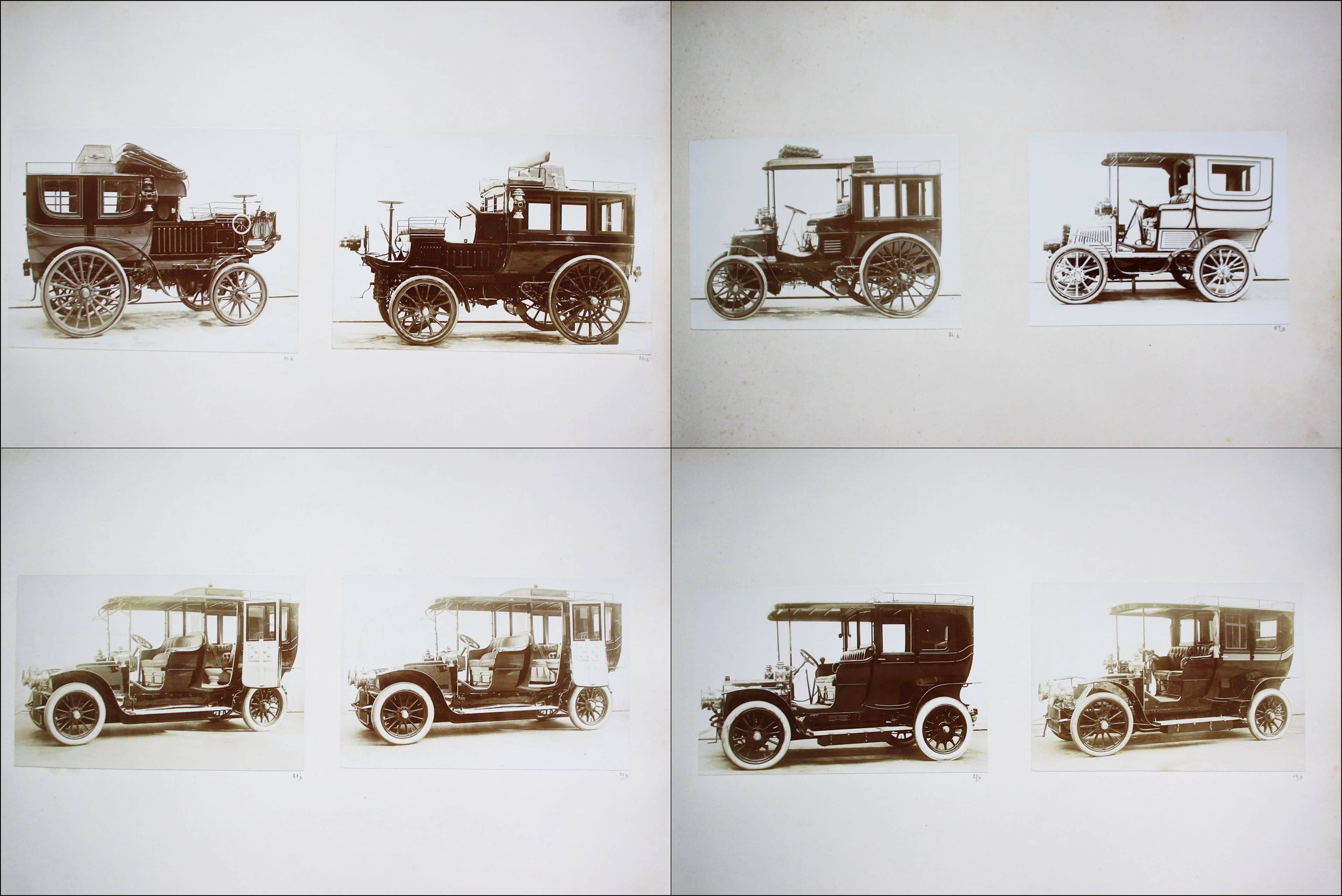 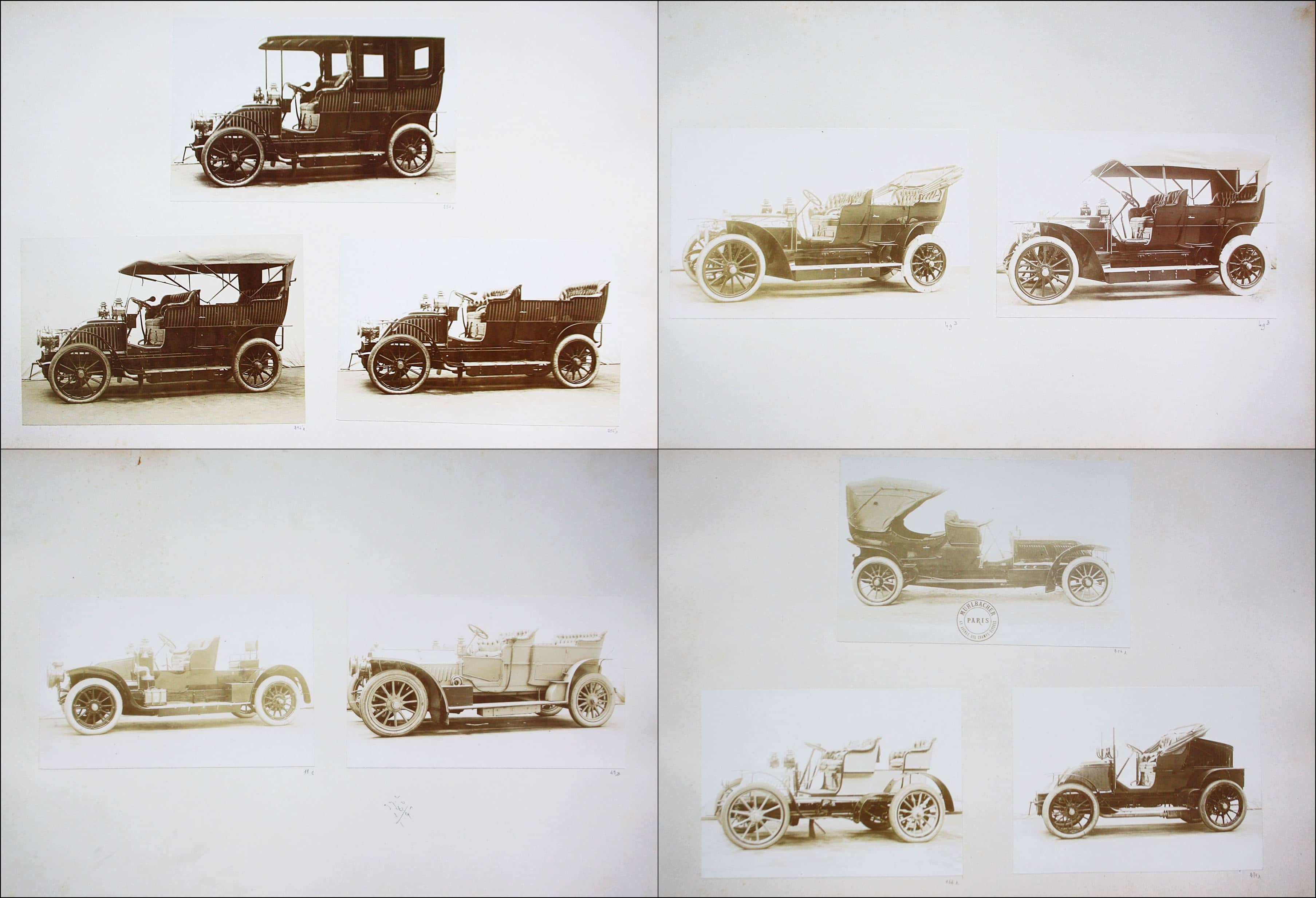