The present game is a classical, 63-square game of goose, with the spaces arranged in a spiral, counter-clockwise. The focus of the game is the life of French king Henri IV (1553-1610), presented chronologically, from his birth to his apotheosis, pointing out marriages, political events and battles.

The game presents the portrait of a king that was merciful and very close to his people, one who welcomes a peasent from Bearn who bring his cheese from his country (space 51); shares the meal with poor peasants (space 7); lets women, children and old people out of Paris (space 26). Henri IV is also presented as a restorer of peace, a wish which prevails over the many memories of religious dissension: the marriage to Marguerite de Valois is presented with no trace of the St. Bartholomew’s Day massacre. Close to his people, Henri IV wished prosperity for all the French people, desiring to see „the least laborer put the chicken in the pot every Sunday“ (depicted on space 57). The king is seen as a courageous leader, inspiring his soldiers to fight in battles: the well-known incentive „Ralliez-vous à mon panache“, told to his companions, before the battle of Ivry (March 14, 1590) is depicted on space 20 of the game. The members of the royal family wear medals, placed on the huts of the geese – this constitutes a family portrait which makest he Bourbons the „sons of king Henry IV“ and sets the stage the succession of Charles X, Louis XVIII’s younger brother. The couple portrait of the Duke and Duchess of Berry makes it possible to date the engraving between 1816 and 1820, the date of the assassination of the Duke (shown on space 59). 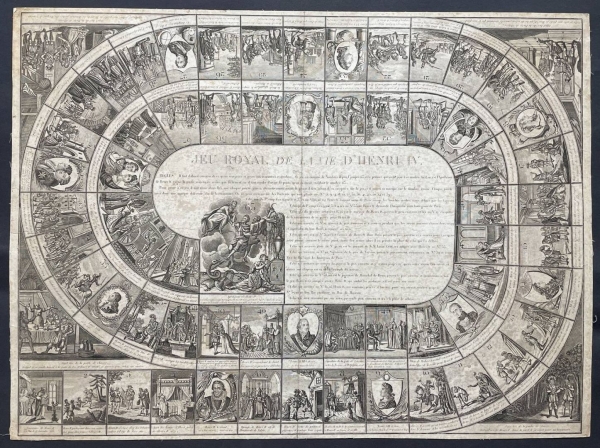