Startseite/Galerie, Gallery/A newly discovered design for the the Villa Benedetti in Rome reflecting the coaction of the first professional woman architect and one of the leading architects of its time

Plautilla Bricci is known as the first women to practice architecture. The Villa Benedetta is her most famous work. She also designed the chapel of St Louis at the Church of St. Louis the French, which was inaugurated in 1680. Bricci descends from a family of artists. Her father was a painter and musician and her brother was a painter and an architect. Plautilla was a registered honorary member of the Accademia di S. Luca. She never get married and did not have any children.
The Villa Benedetti was built between the years 1663 and 1665 at the Via Aurelia near the Porta San Pancrazio in Rome. It was commissioned by Elpidio Benedetti (1609-1690). From 1646 to 1661, Benedetti was the art agent for Cardinal Mazarin, then for Jean-Baptiste Colbert and later for Louis XIV of France. It was one of Benedetti’s intentions to inhabit the fanciest villa in Rome. This was probably also the reason to award the contract to a woman, which alone was a novelty at that time. Plautilla Bricci had the leading role at the construction site assisted by her brother Basilio.
The architecture of the Villa Benedetti was quite unusual for the time. It presented a variety of loggias, curved walls, and some works in very elaborate stucco, resulting in a heavy Baroque architecture. The pictorial decorations inside the villa were executed by Pietro da Cortona, Francesco Allegrini, Giovanni Francesco Grimaldi as well as Plautilla Bricci herself. Because of its overall shape resembling a ship, it became known as Villa del Vascello, rather than Villa Benedetti or Villa Giraud (its later owners).
During the construction phase, the plans for the villa were changed several times, resulting in a quite different appearance of the building than in its original design. In April of 1664, Benedetti went to France where he visited Chateau Vaux le Viconte and Fontainebleau and sent drawings to Rome to introduce changes to the plans for his villa. Upon his return to Rome, Benedetti personally delivered a letter from Jean-Baptiste Colbert to Gian Lorenzo Bernini, in which Colbert recommends to the artist to follow all that Benedetti will indicate him „about this subject“. The present drawing is therefore a first reworking project of Bricci’s original design containing Bernini’s modifications according to Benedetti’s requests.
The drawing represents the villa’s noble floor and is based on Bricci’s design of 1663 (now in the National Archive in Rome). There are several important alterations to Bricci’s plan including the replacement of the hanging garden from the south to the north of the building and the extensive remodelling of the northern facade. All modifications of the present design are discussed in Carla Benocci’s article in Strenna dei Romanisti (see below). The drawing illustrate a preliminary draft, as the villa has not yet been completed. The final version of the building is recorded in the book Villa benedetta discritta published in 1677 by Benedetti under the pseudonym of Matteo Mayer, showing also some of the alterations of the present design.
This most important drawing delivers new insights into the formation phase of one of Rome’s most eccentric private mansions in the 17th century. Furthermore it reflects the coaction of the first practicing woman architect and one of the leading architects of its time. 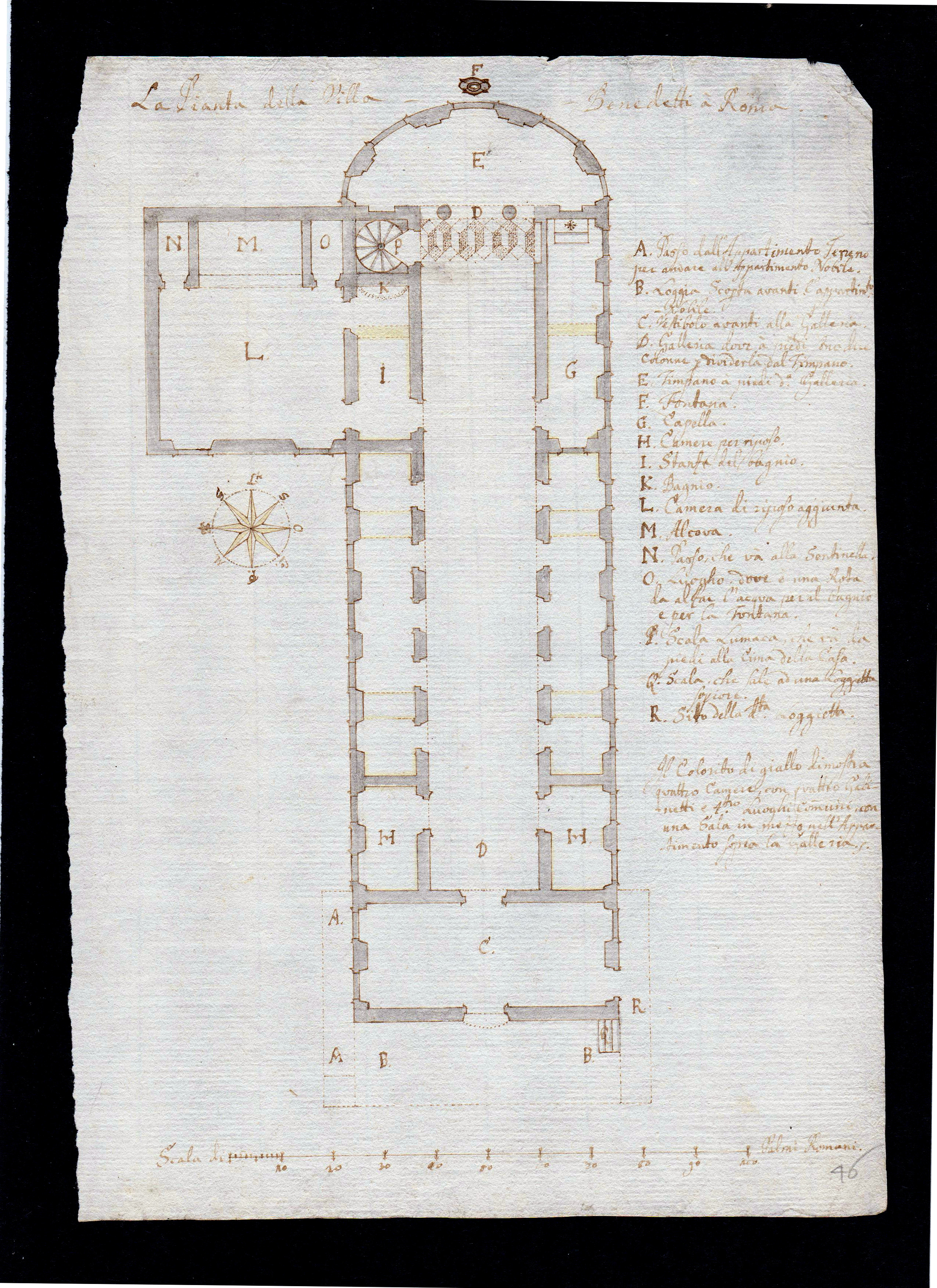