A richly illustrated edition of Orfelin’s magisterial history of the life of Peter the Great (1672-1725). Published during the rule of Catherine the Great, this work can be seen as part of a series of works (including Lomonosov’s history of Russia up to the year 1054) aiming at a full historical record of Russia’s past. Catherine financed the publication of many similar works herself, although this particular work is perhaps more likely to have been promoted by the Russian Ambassador to Venice, given the circumstances of its publication (see below). The publication date coincides with the (admittedly lengthy) construction of the gigantic Bronze Horseman statue of Peter the Great, part of Catherine’s international promotion of a modern and powerful Russian state, as begun by Peter himself.

The importance of Orfelin’s work is attested by Pushkin’s use of it; it is believed that Pushkin owned a copy, the first edition, which he made use of while writing his substantial but unfinished history of Peter the Great. In his notes, the Russian writer mentions Orfelin’s work several times, also mentioning that it contains information not to be found elsewhere.
Orfelin (1726-1785) is one of the most noted and respected Serbian writers of all time. He had a wide and varied career, from secretary to the archbishop of Karlovci (Karlowitz) to writer of schoolbooks to engraver to wine maker, and he opened the first print shop in Karlovci in 1749. He spent several years (from 1764 onwards) working in Teodosio’s print shop, editing and proofreading, and Teodosio printed several of his works. By 1770 he was back in Karlovci, and in 1777 he was commissioned to produce a book of calligraphy for the Serbian regions of the Holy Roman Empire. He openly criticised the way he was told to carry this out, resulting in his fall from favour and an impoverished exile. Orfelin claimed to be an autodidact, but his prodigious learning (along with his very extensive library of books, maps and prints in Russian and many western European languages) makes this claim reasonably unlikely.

The printer, Demetrio Teodosio, worked for the Glikis press in Venice before opening his own press through financial support from the Greek merchant Pano Maruzzi, who became Russian Ambassador to Venice in 1768. Teodosio’s press produced works aimed at supporting Orthodox Christianity, as well as secular works (such as this) in various Balkan languages and Armenian. He was the principal Venetian publisher of works in Cyrillic (see Le civilta del libro e la stampa a Venezia (Padua, 2000), pp. 128-129 and 160-161).

The binding on this volume, containing the royal arms of Hungary, implies a connection with the Empress Maria Theresa (ruled 1740-1780), whose patronage Orfelin enjoyed before his fall from favour. It may well have been intended as a presentation copy to her.

Orfelin’s history of Peter the Great was first published by Teodosio in 1772, however without the maps and plates, Orfelin himself was still engraving at the time (there are two issues of this first edition, the first with the dedication, the second without). The 1774 edition (with some plates) was printed in St Petersburg at the Imperial Academy of Sciences and edited by Shcherbatov and Troepolskoi. The present edition (probably not issued until 1779) contains the 1772 Venice printing of the text but with all the maps and plates added, and with a cancel title-page (extending the title from Zhitie… to Istoriya o zhitii… and omitting „con licenza de‘ superiori“ from the imprint). Some of the maps were published separately in an atlas in Pest in about 1827.

Very rare: there is no complete copy in a Russian library. We have only been able to trace a few copies: the State Public Historical Library (GPIB) in Moscow holds volume 1 only, the Public Library of Jagodina holds volume 2 only (miscatalogued as the first edition but with the maps and plates from the third edition, and with the frontispiece from volume 1), and both volumes are held by the Matica Srpska Library in Novi Sad, where Orfelin died. 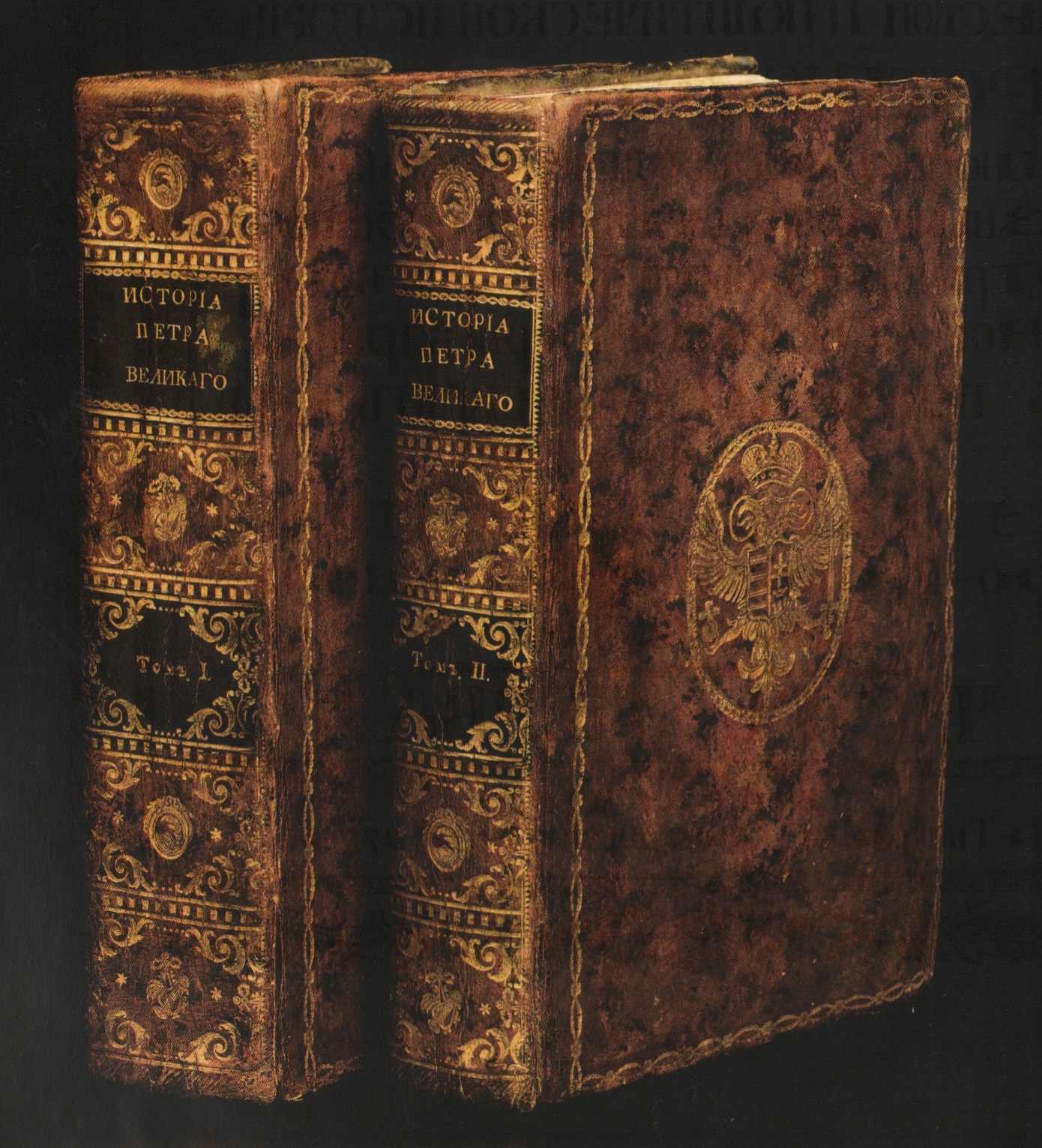 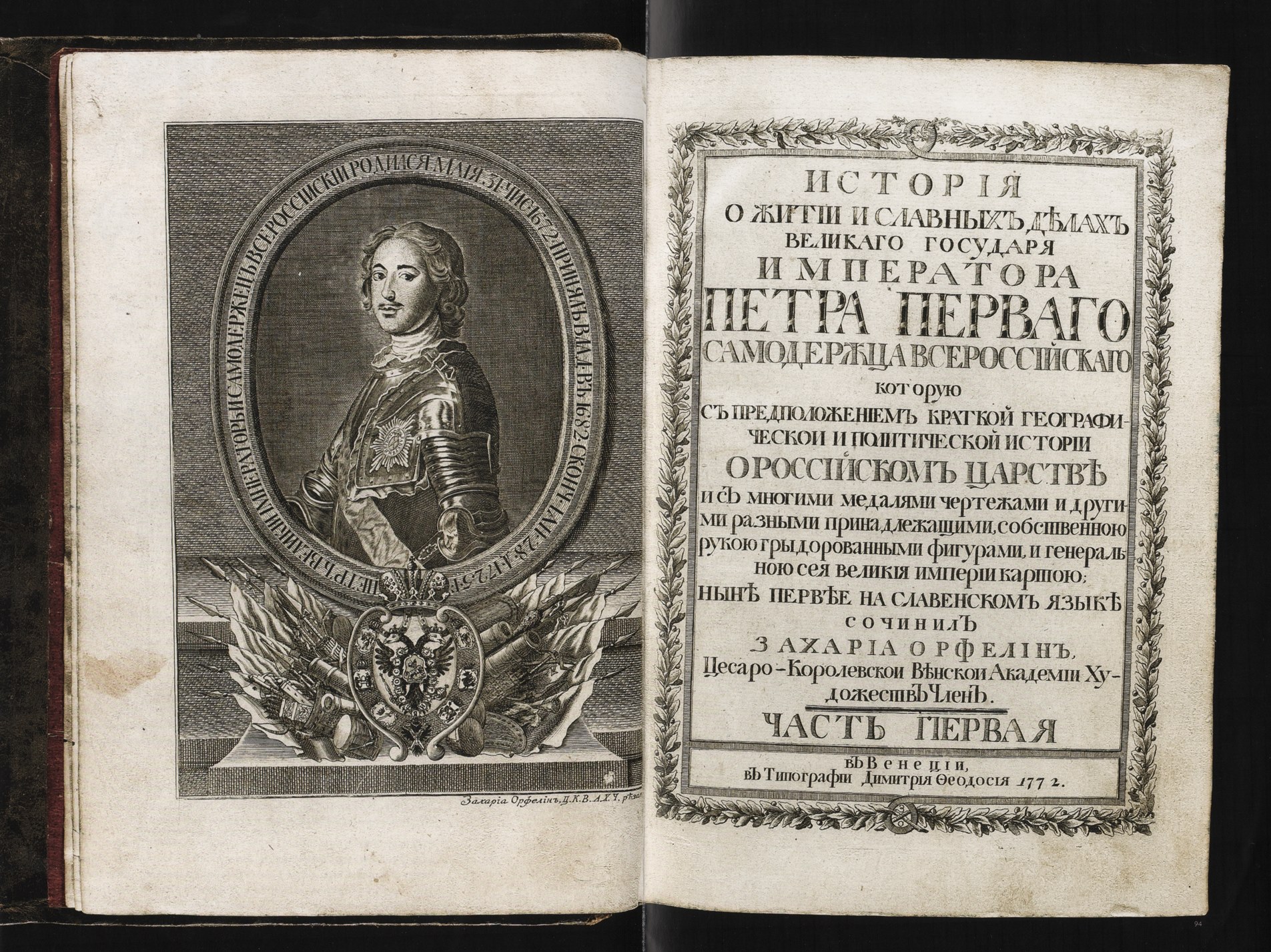