Startseite/Galerie, Gallery/Unprinted manuscript annals of the city of Genoa from 1600-1610

Unprinted manuscript annals of the city of Genoa from 1600-1610

The present manuscript is a handwritten chronicle of the city of Genova that covers the time between 1600 and 1610. The author of the text is most likely Giulio Pallavicino, a nobleman and state official (he has fulfilled various political and representative roles), active in Genova in the late 16th-early 17th century. This chronicle stands along the perhaps better-known chronicle of Genova “Annali della Repubblica di Genova dal 1581 al 1608”, by Antonio Roccatagliata, documenting the history for 2 further years. However, it is important to mention that, as opposed to Roccatagliata’s text which is also fairly well-known and printed in several editions since 1872, the present chronicle has not been printed until now, and the text exists only in two known manuscripts.

The structure of the manuscript is largely the same for all the years covered, and it is generally divided into three parts. The first part covers the important events that happened in Genova in that precise year, documented chronologically and dated. Pallavicino made note of happenings such as election rounds and final results, administrative fees paid by colonies (such as Corsica), holidays and celebrations, but also more unusual, bizarre events, such as hangings, tournaments, and stories about the citizens’ gambling habits, city crime incidents (such as the murder of the Doge of Genova Lorenzo Sauli in 1601, and the capture of the criminal), or events surrounding the Rota Criminale. It has also been noted that the attribution to Pallavicino is also supported by the fact that the manuscript includes several references to Pallavicino’s closest kinship, starting with his brothers (Ceccarelli, 2020).

The second part covers marriages that took place each year, naming the bride and the groom, their age, and whose son/daughter they were, together with the women’s dowry. The third part notes deaths that occurred each year, with the full name of the deceased, where they died, and at what age. The structure of the chronicle is very similar to Pallavicino’s previous work, “l’Inventione di scrivere tutte le cose accadute alli tempi…”, which covers Genova’s history between 1583 and 1589. This is the main argument that led to the present manuscript’s attribution to Pallavicino. A widely shared opinion is that “Racconto delle cose successe…” is, in fact, a continuation of Pallavicino’s first chronicle – it has even been called “l’Inventione seconda”. The attribution is, thus, based on the similarities found between the manner of documenting and writing the chronicle’s text and Pallavicino’s previous writings.

The present manuscript is most probably a copy – dating from the first quarter of the 17th century, whose original is yet to be found. An identical manuscript is to be found in the possession of a Genovese library and has unanimously been attributed to Giulio Pallavicino.

In following these annotations of marriages and deaths, we can see there are family names that come up more often than others – namely Doria, Spinola, etc. This may further lead to a connection between Pallavicino and these families (it is also notable that his mother came from the Spinola family), which meant information about them was more accessible than that about other families.

The main notable particularity of our manuscript is that it includes a drawn ecclesiastical coat of arms at its beginning. The coat of arms belongs to the Doria family and specifically points to a clergyman of the family. This may further lead to the idea that this handwritten copy of Pallavicino’s original manuscript was made as a commission for someone in the Doria family. Pallavicino himself had close ties with the Doria family, having been the brother-in-law of Giovanni Battista Doria (c.1530-1630).

The manuscript offers valuable information on the history and administration of the Republic of Genova at the beginning of the 17th century, as well as insight into the city’s life, political practices, as well as political tensions, administrative decisions, cultural practices. For instance, the manuscript starts with an interesting piece of information: opposed to what was previously believed, the artist Giovanni Battista Paggi (1554-1627) – who was forced to flee Genova after being accused of murder- has returned to Genova on the 4th of January 1600, and not in 1599.

This is the second known copy of this text, the other identical manuscript – in terms of the text itself – is to be found in Genova, in the Archivio Storico del Comune di Genova; Manuscript 109.D.4. In comparison to the manuscript in Genova, our copy also includes the beforementioned coat of arms which points out to a work on commission done for someone in the notorious Doria family; moreover, this is a much neater version of the manuscript, the text itself is highly intelligible and the handwriting is clean and well-refined. We were not able to locate any other manuscript copy of the text elsewhere. Until now there is no printed version of this text.

There are two different watermarks on the manuscript’s leaves. Both include the cross sign and two monograms: „G.R.“ and „A.N.“, respectively. We were able to find three similar watermarks, collected by C.-M. Briquet in his work on Genovese watermarks from the 12th to the 17th century (numbers 238, 239 and 249). We were not able to locate an exact match. 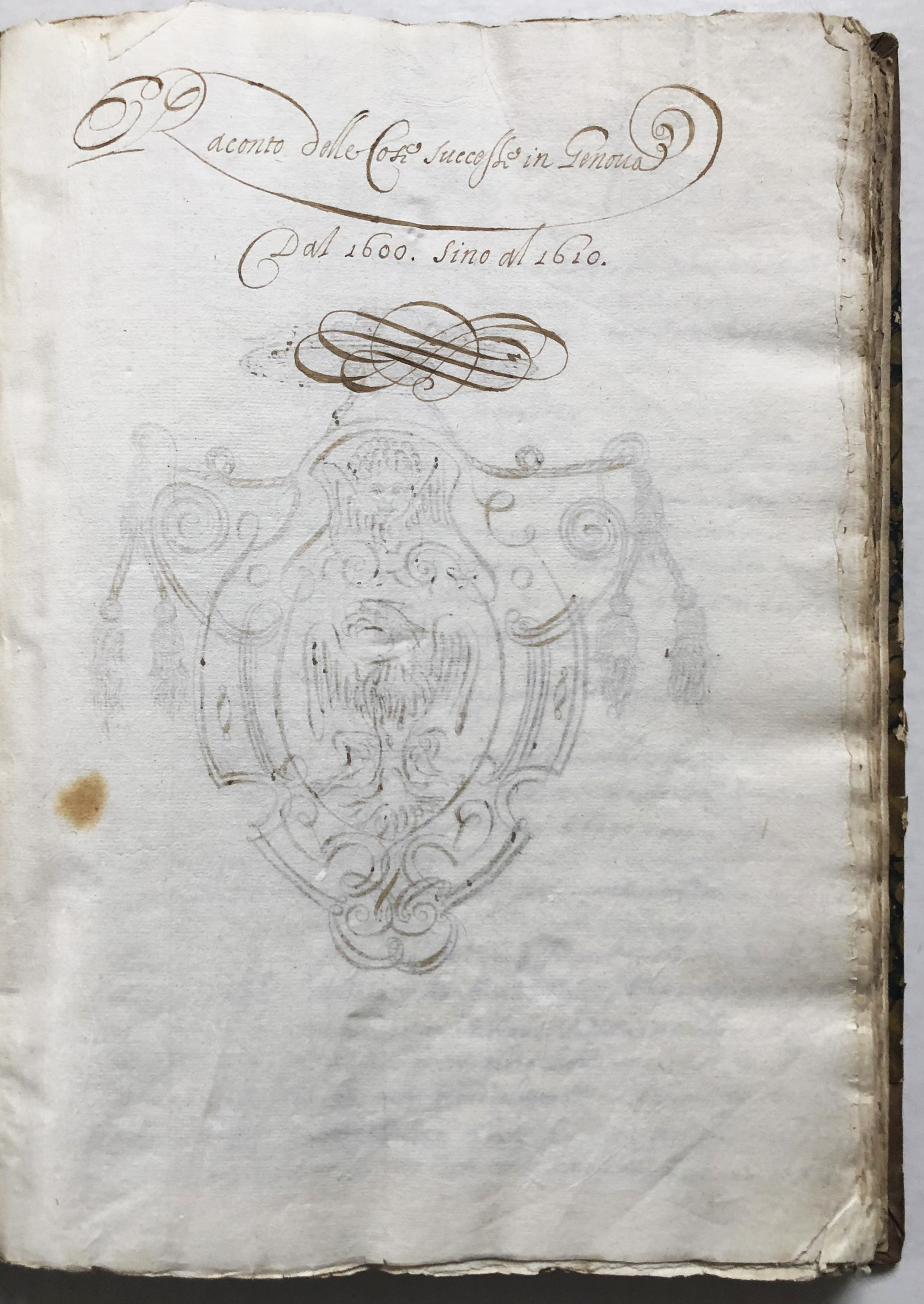 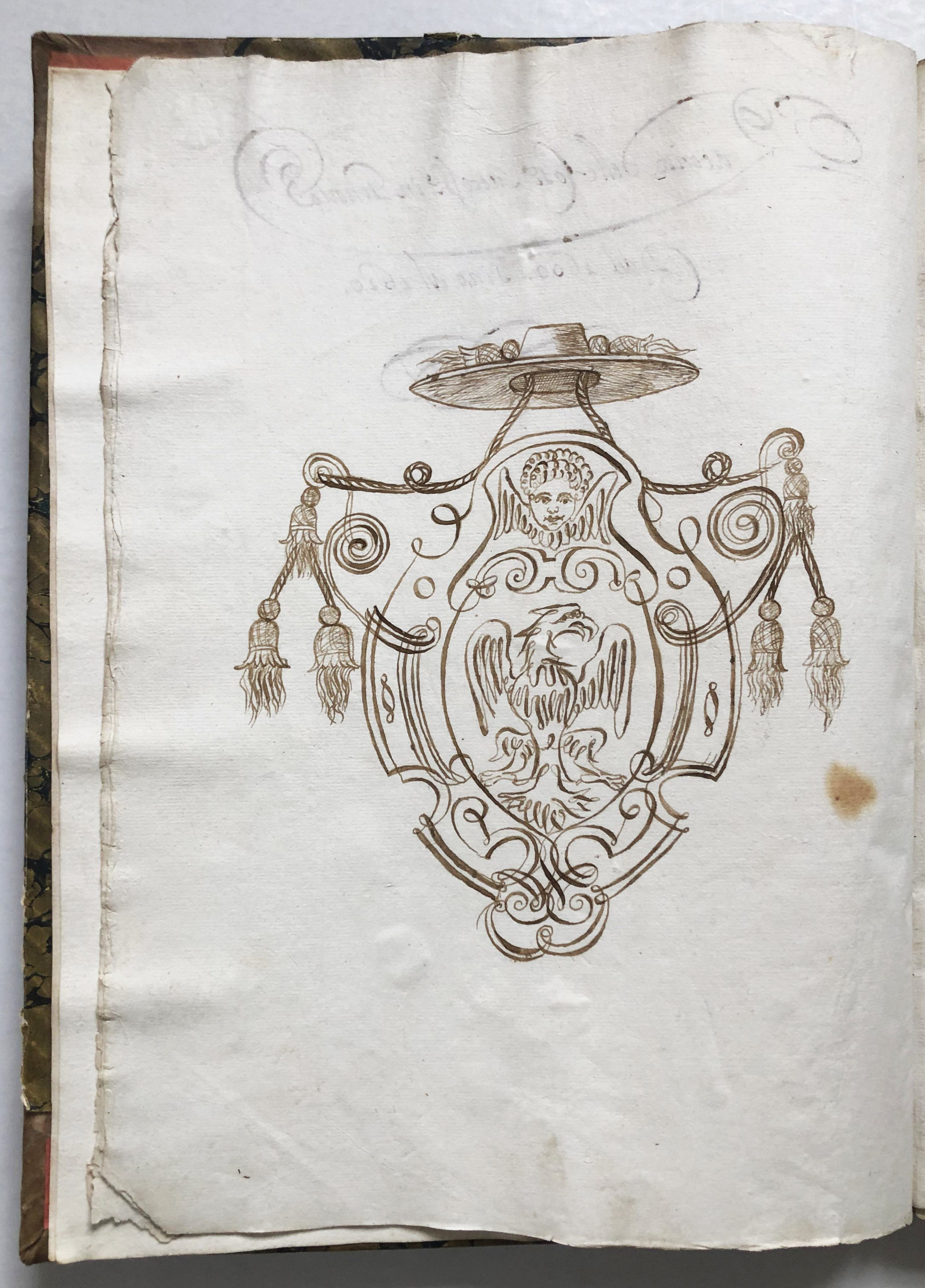 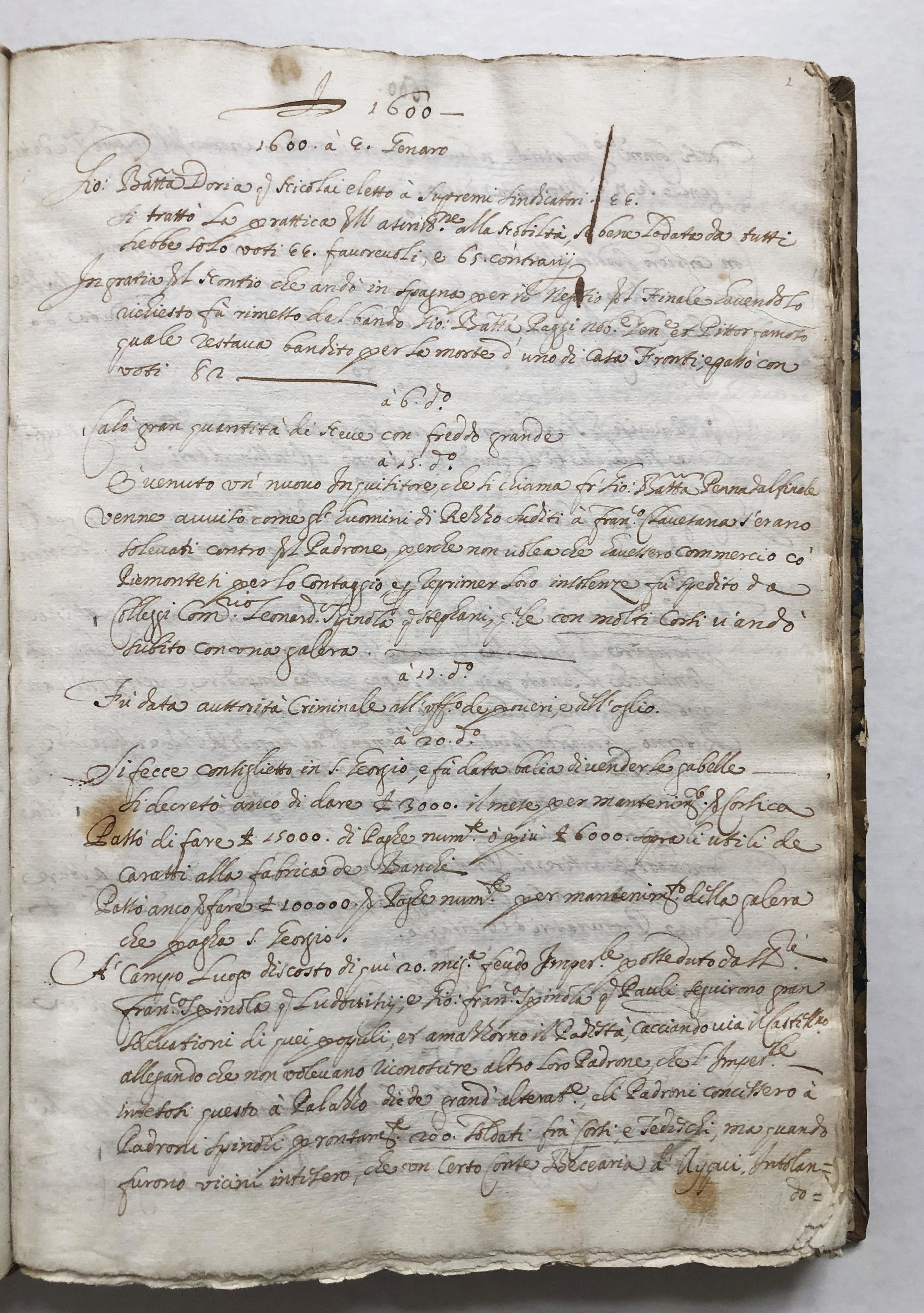 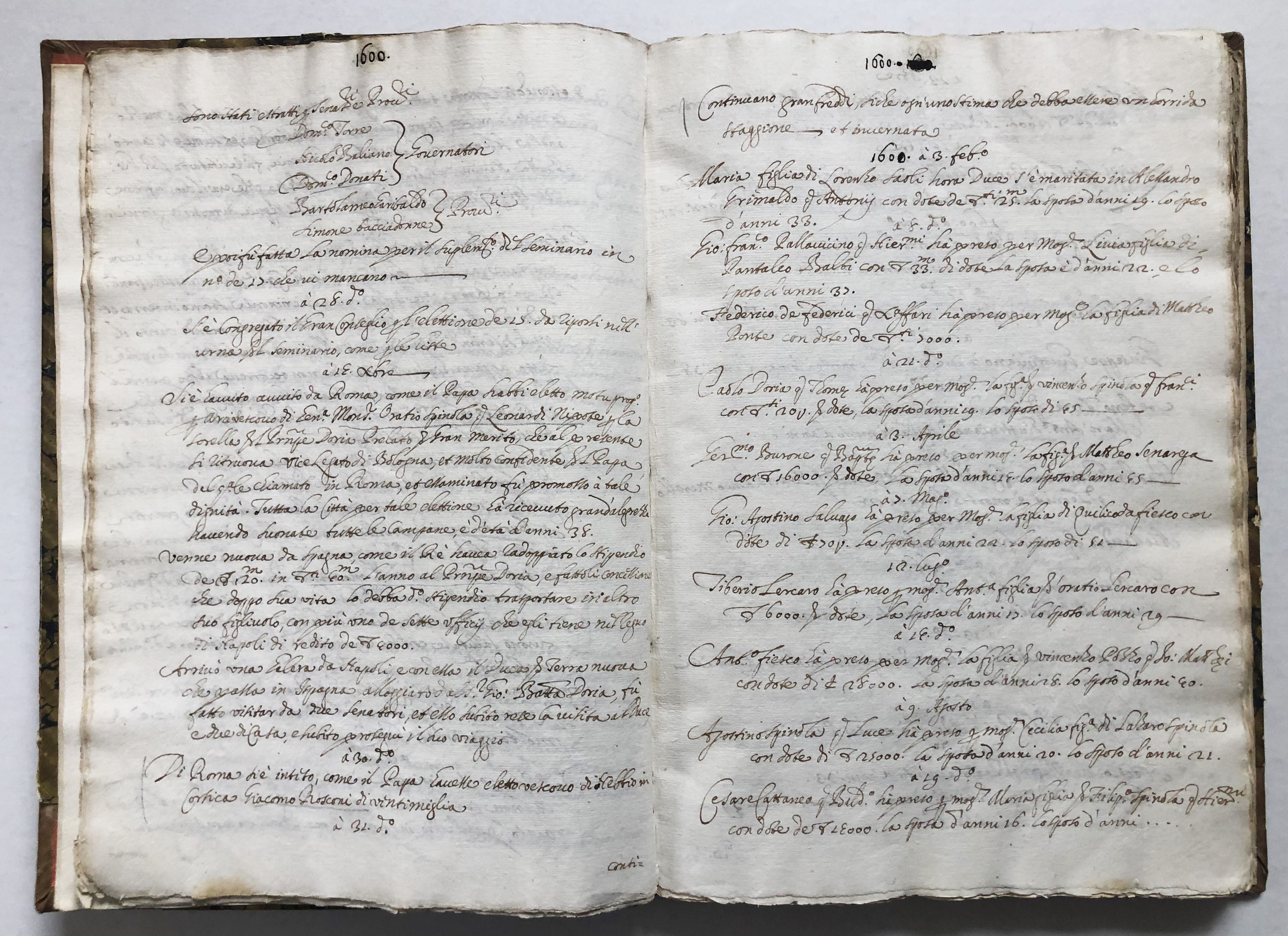 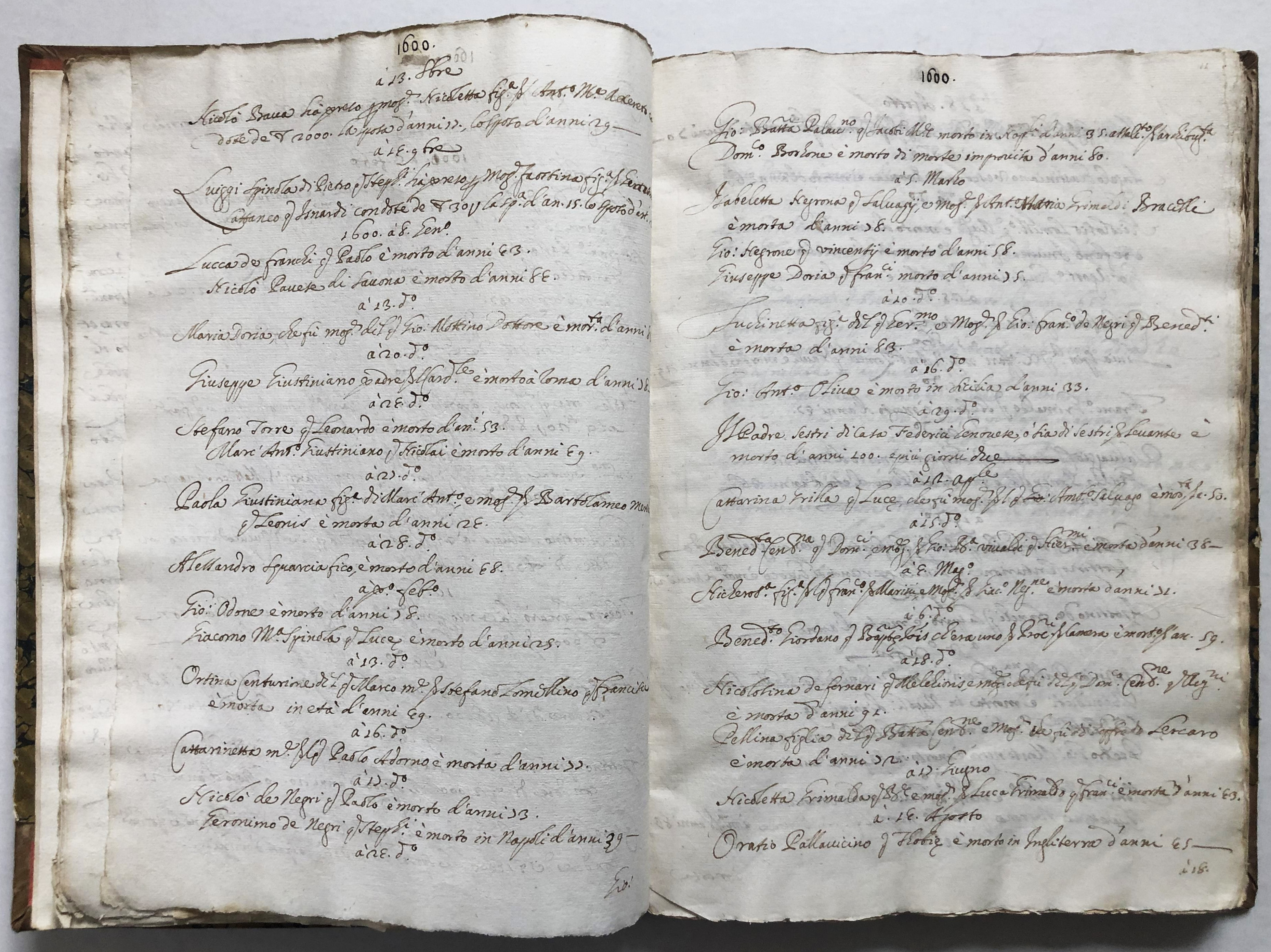 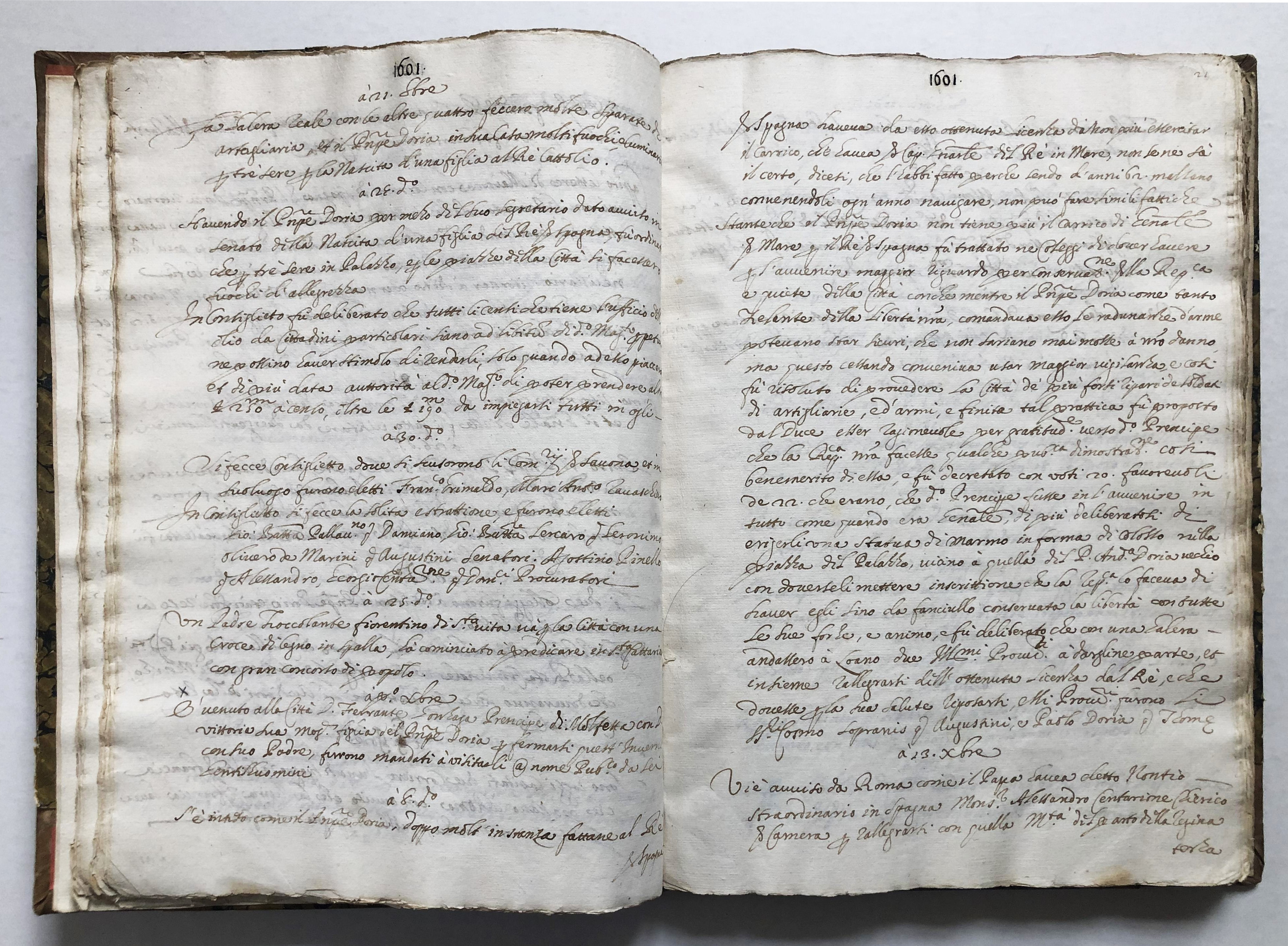 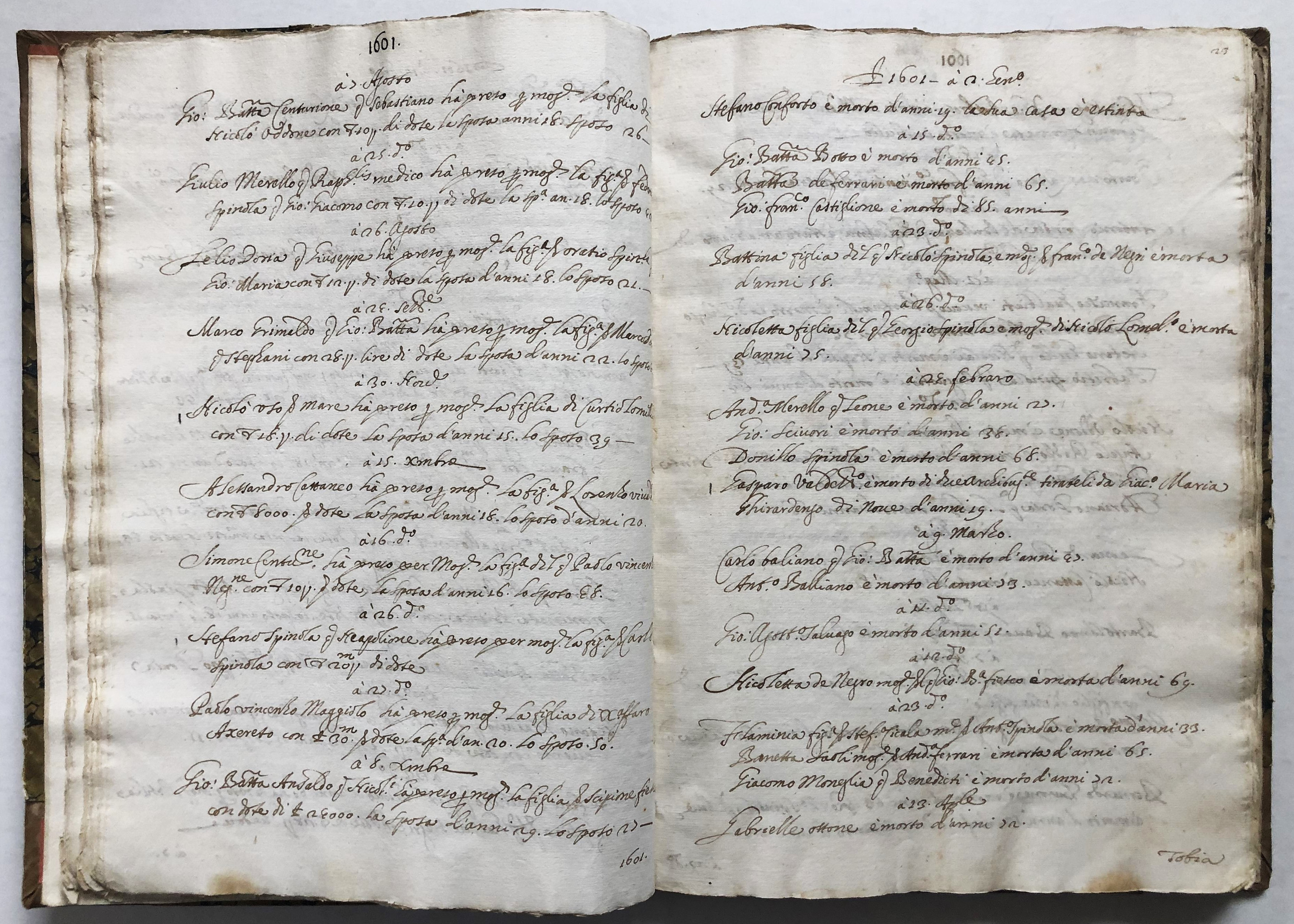 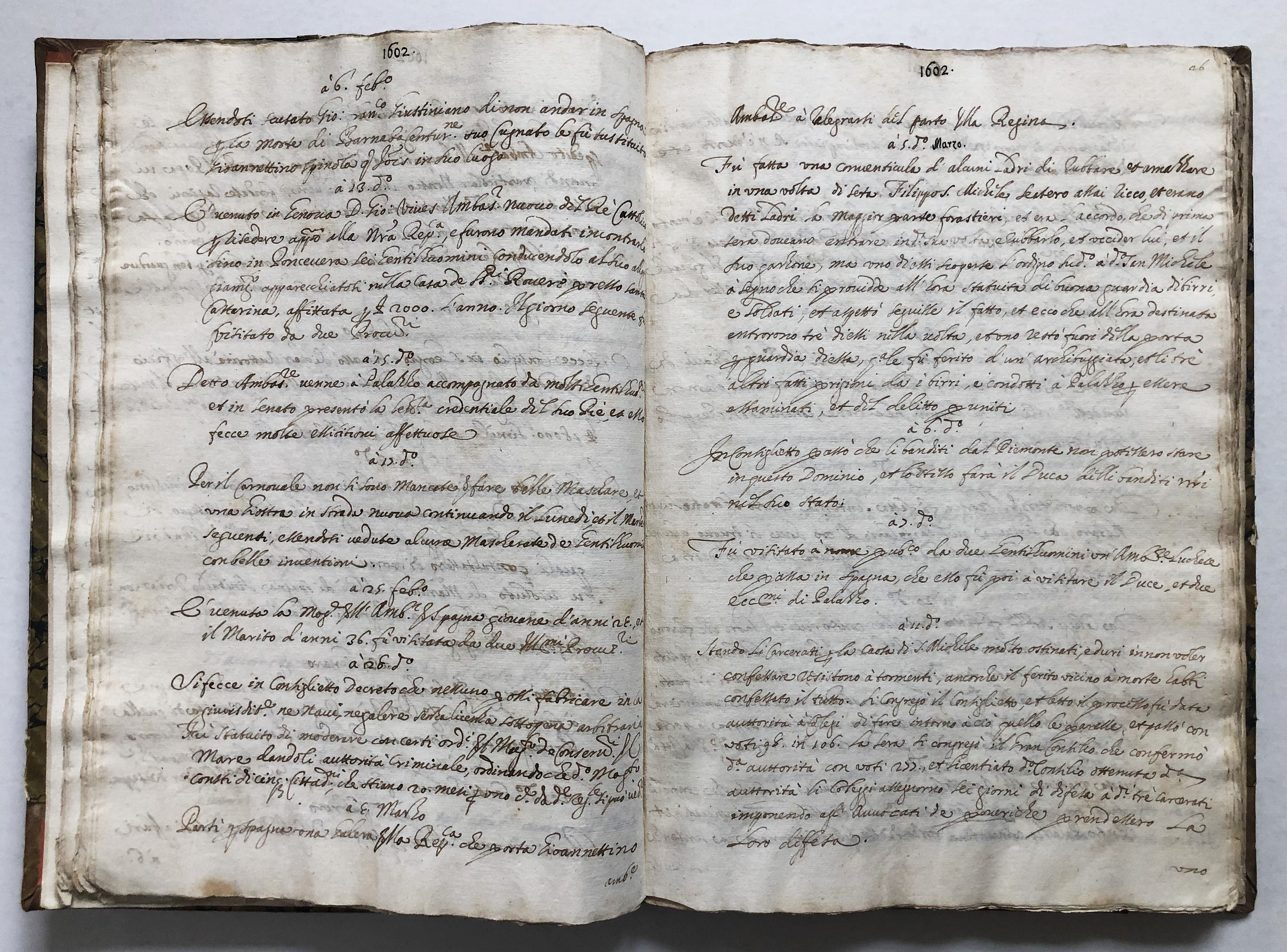 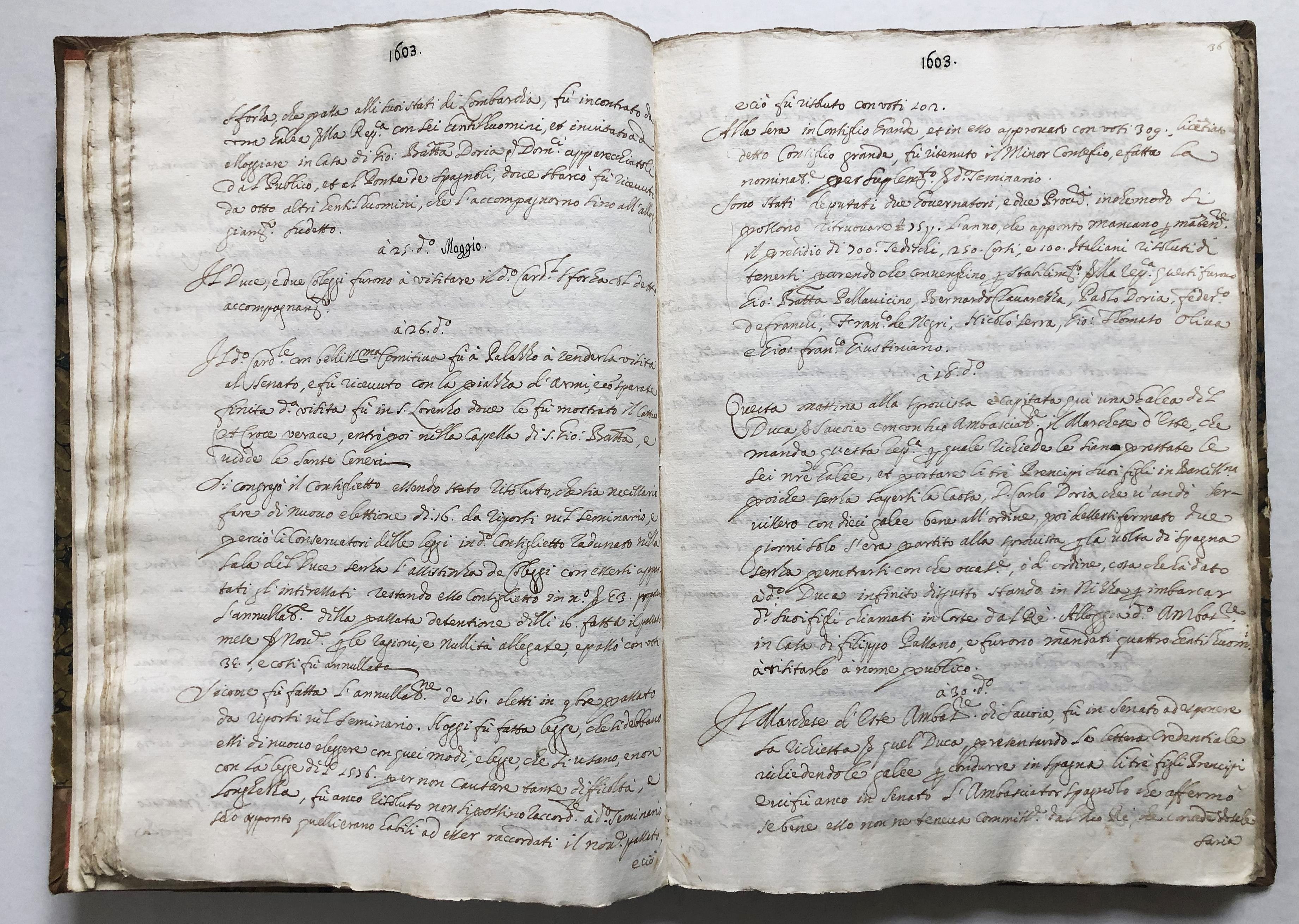 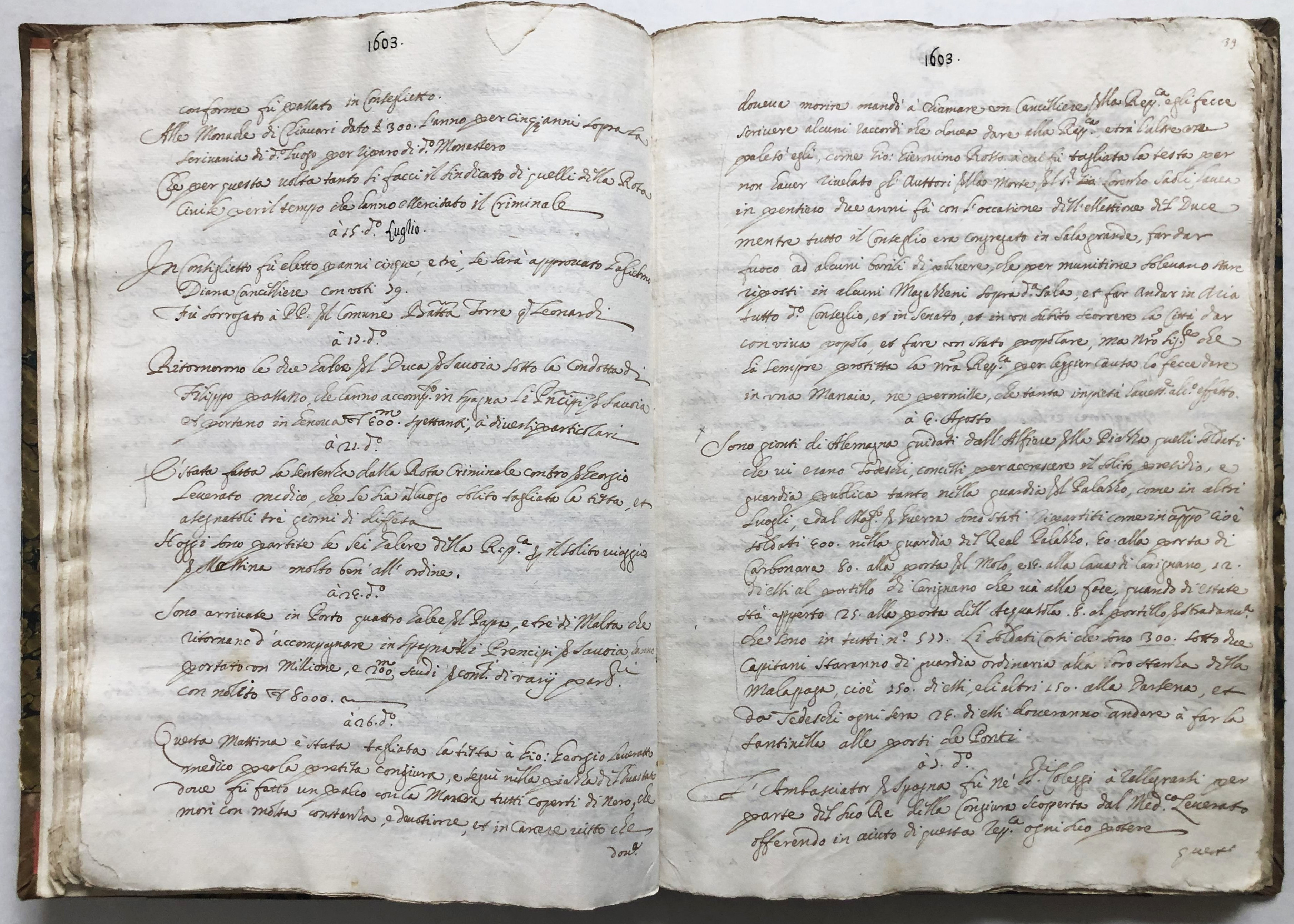 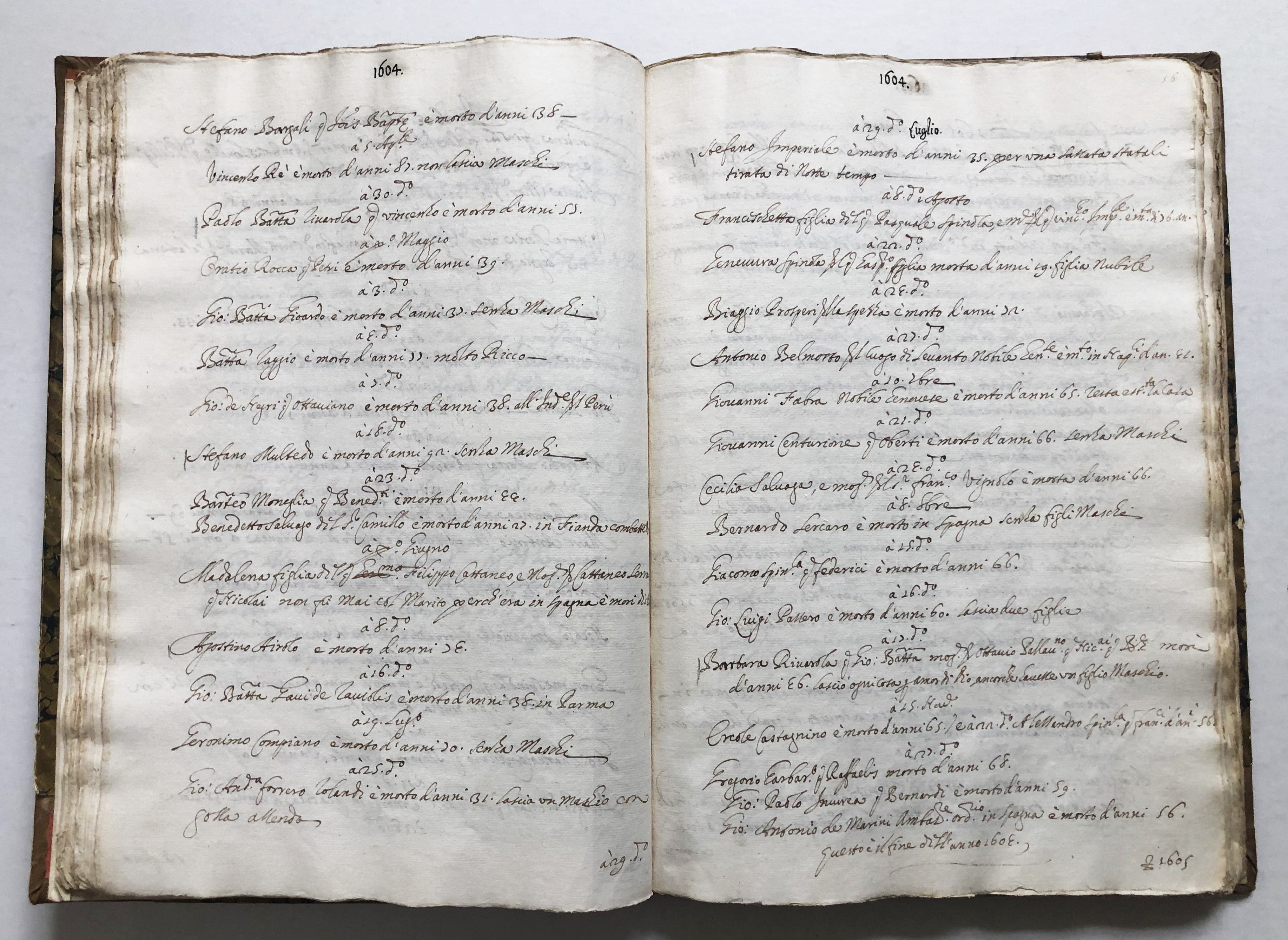 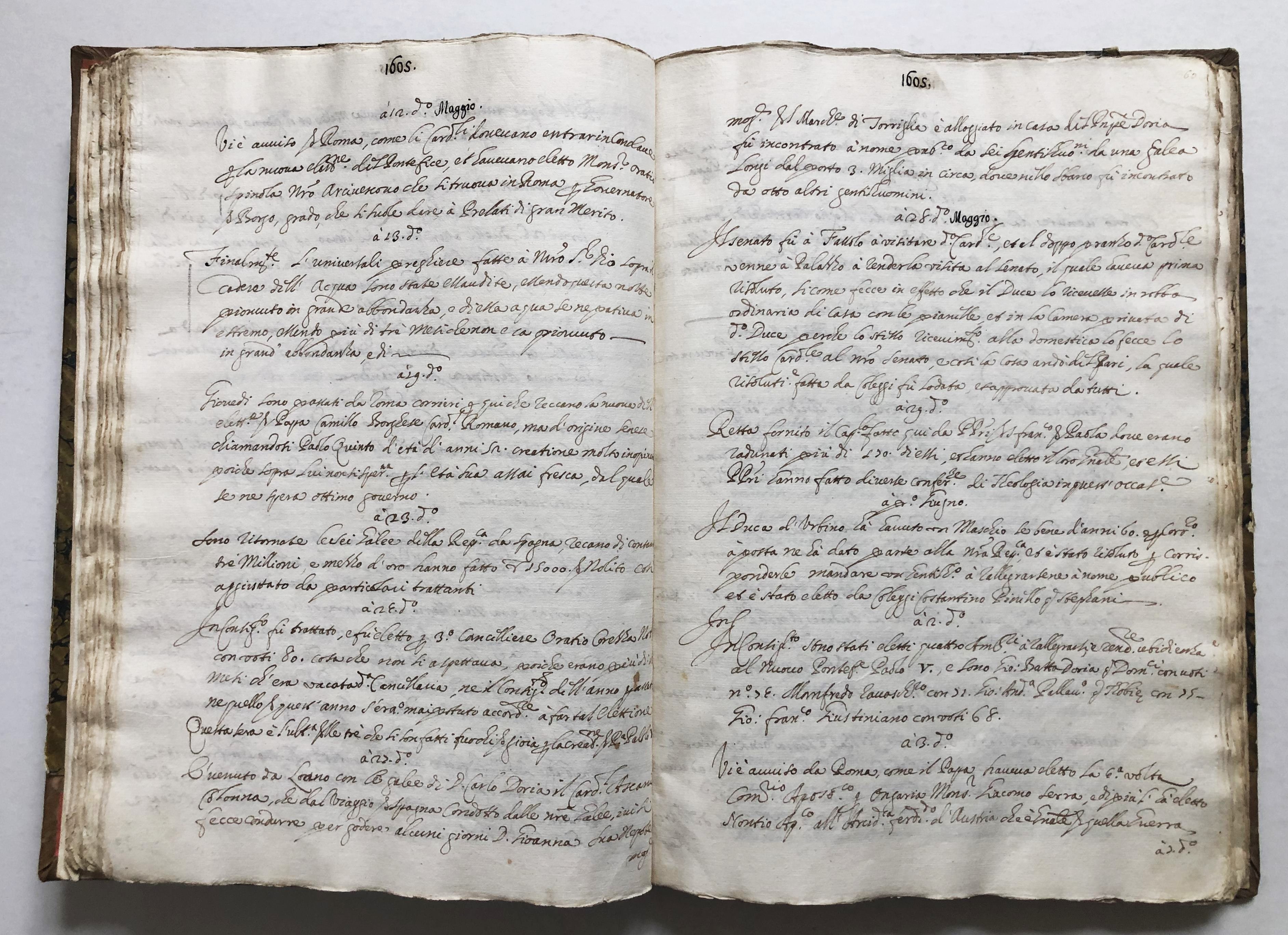 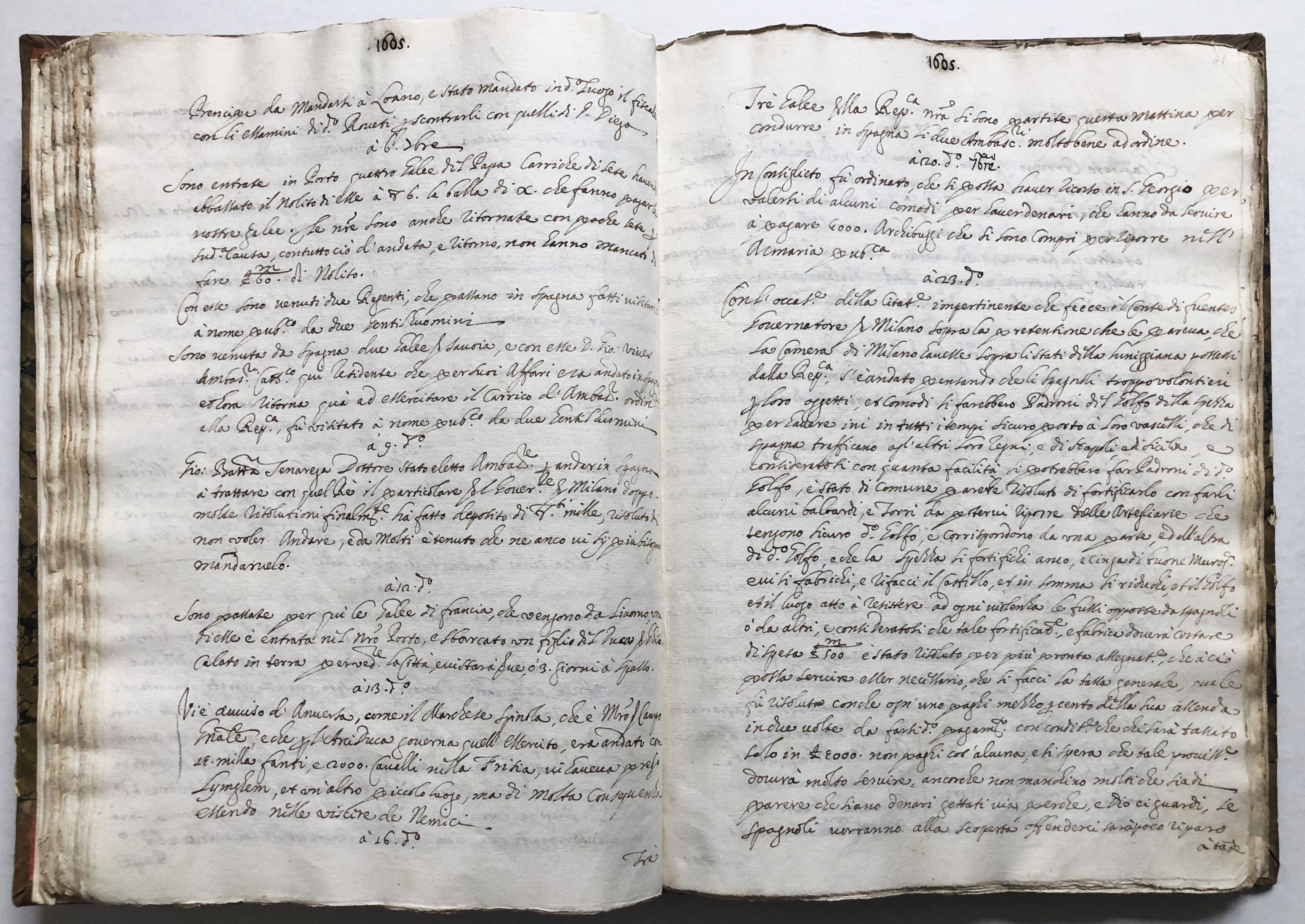 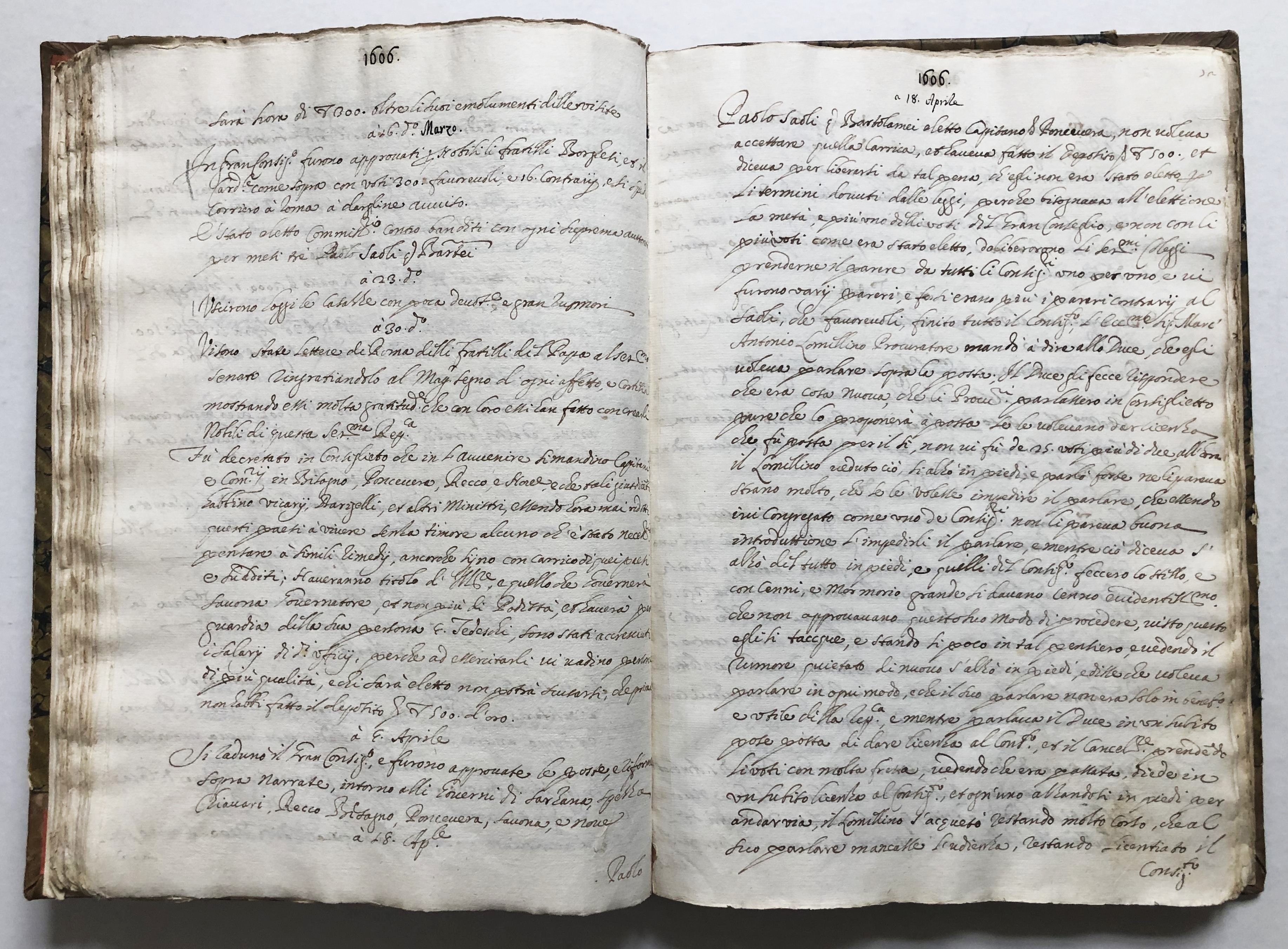 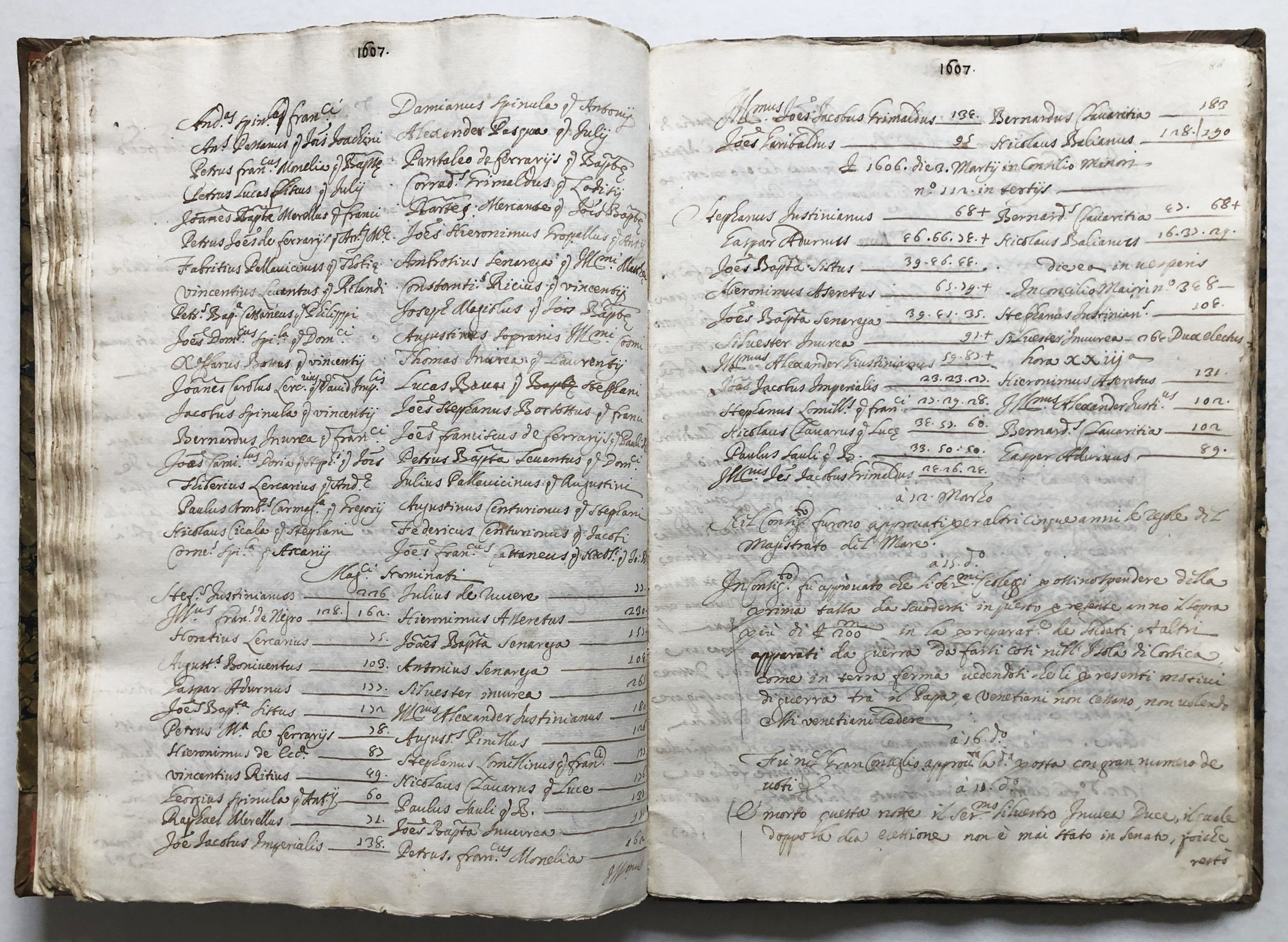 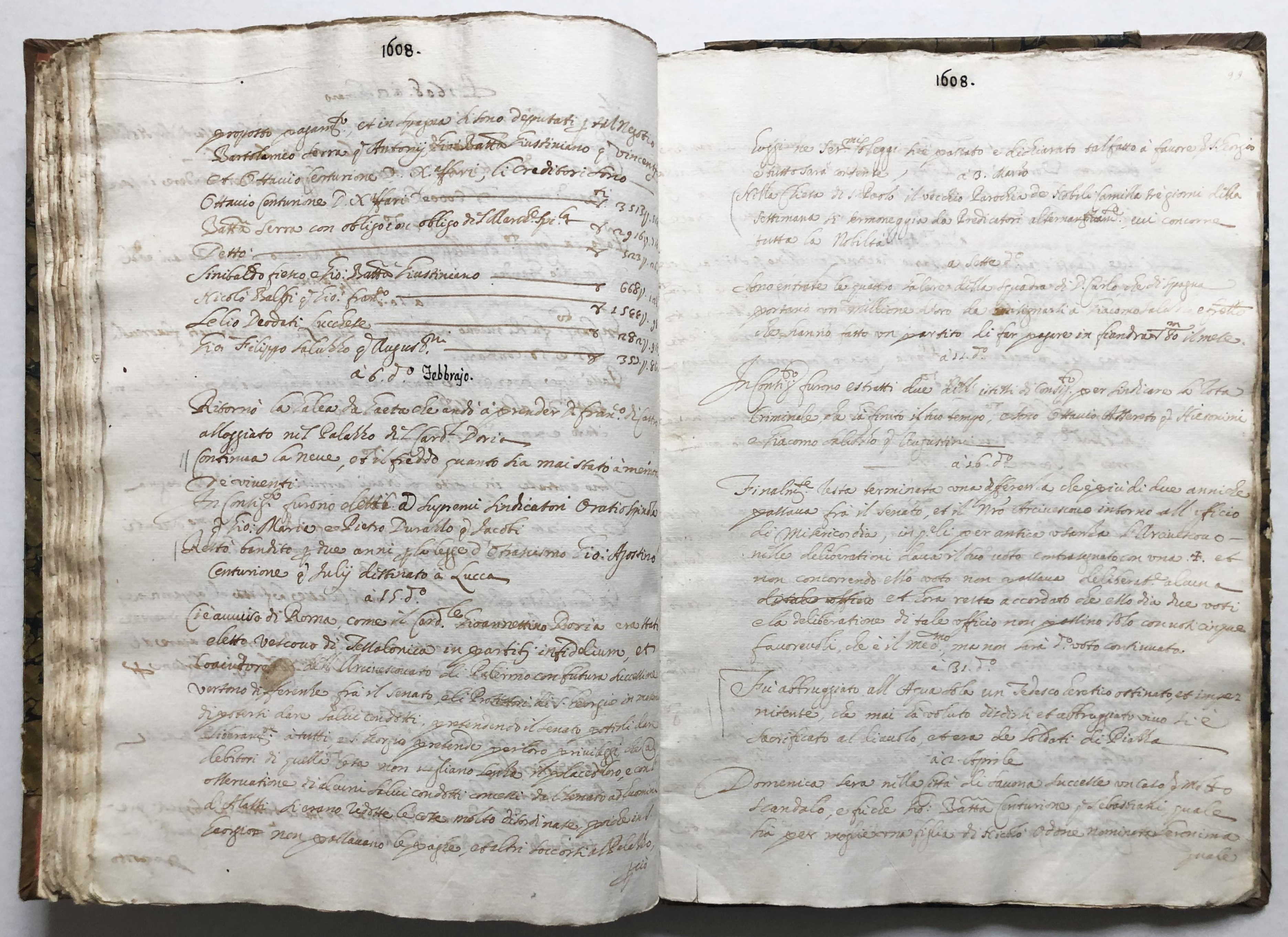 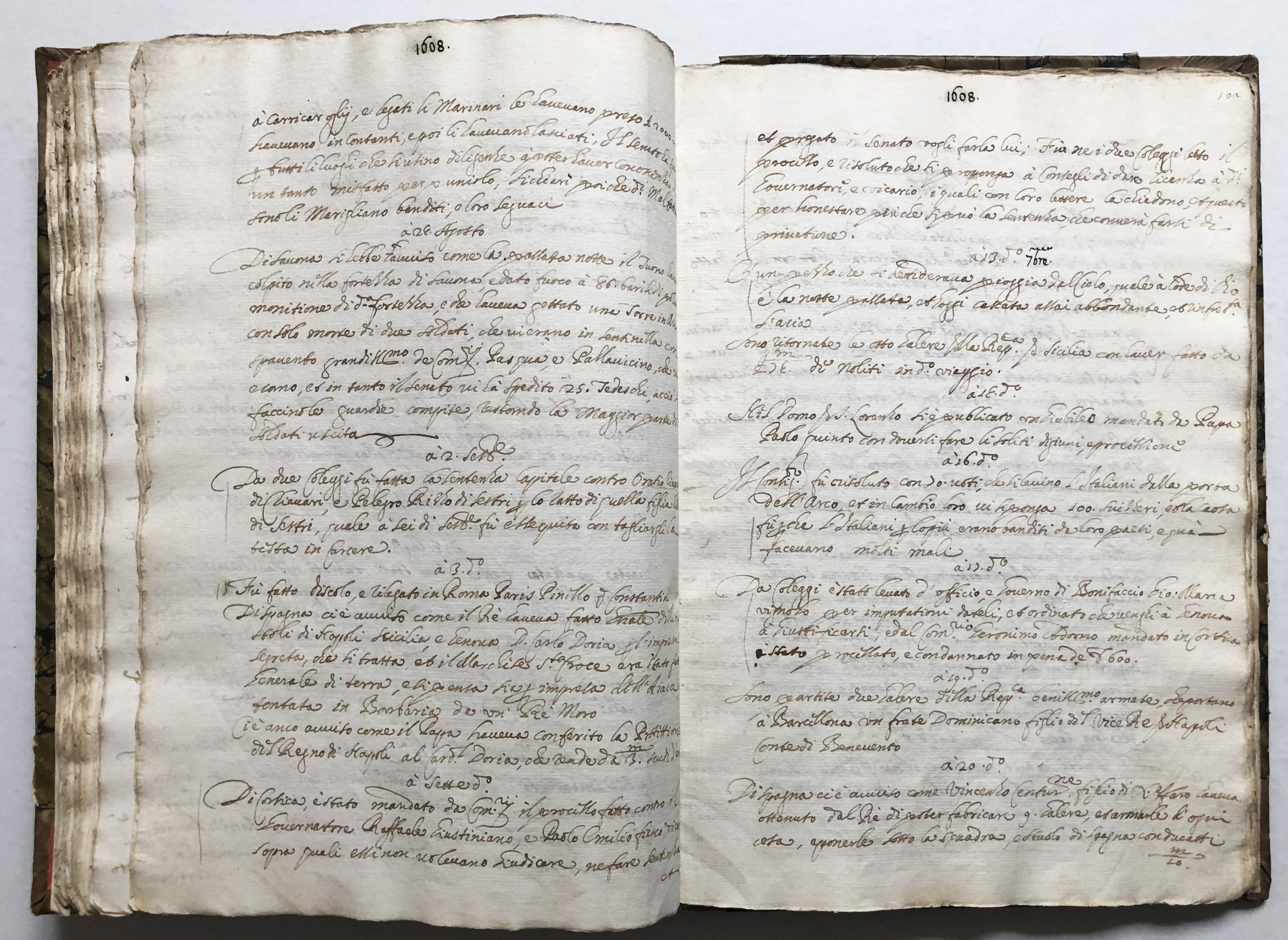 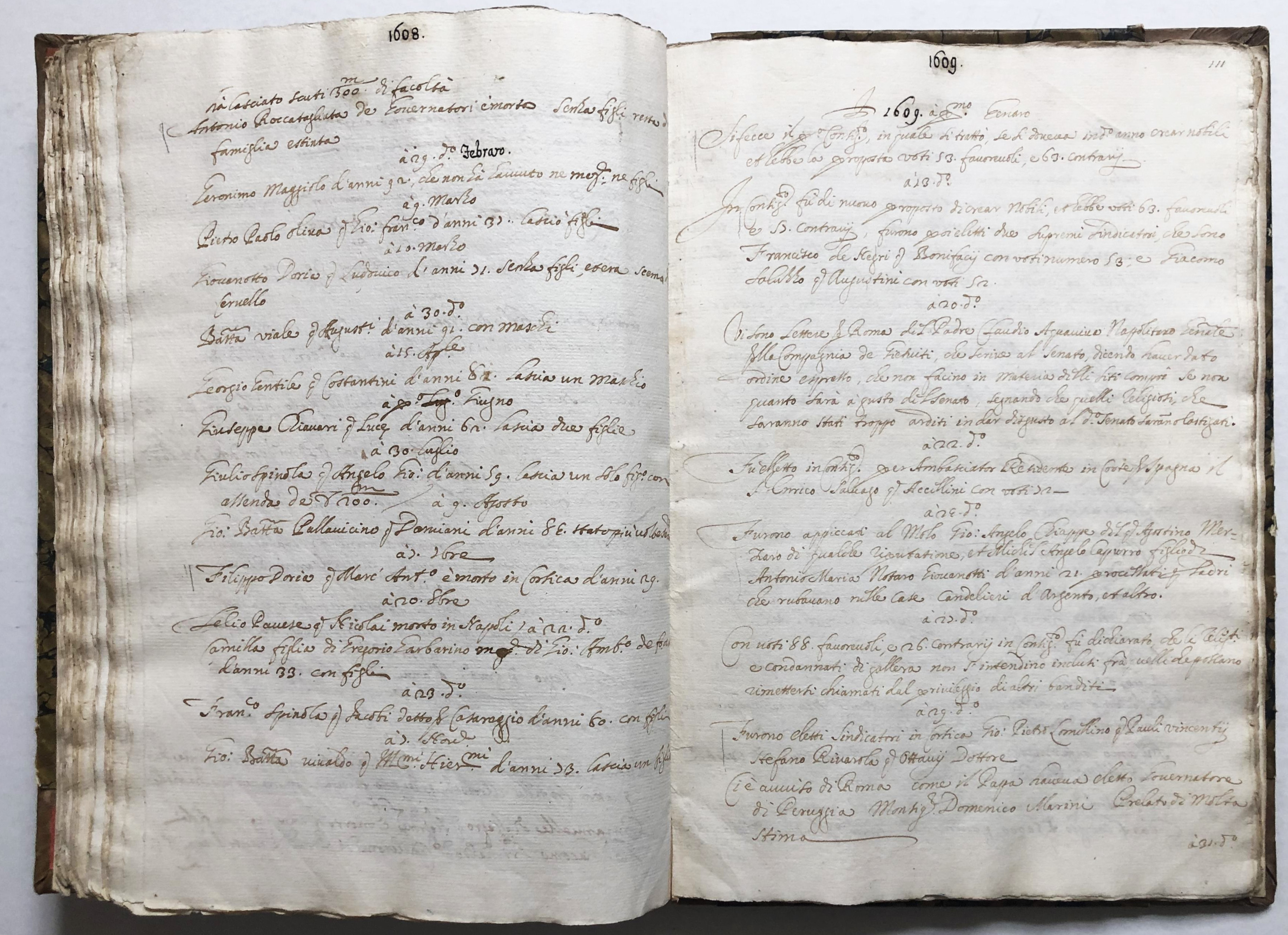 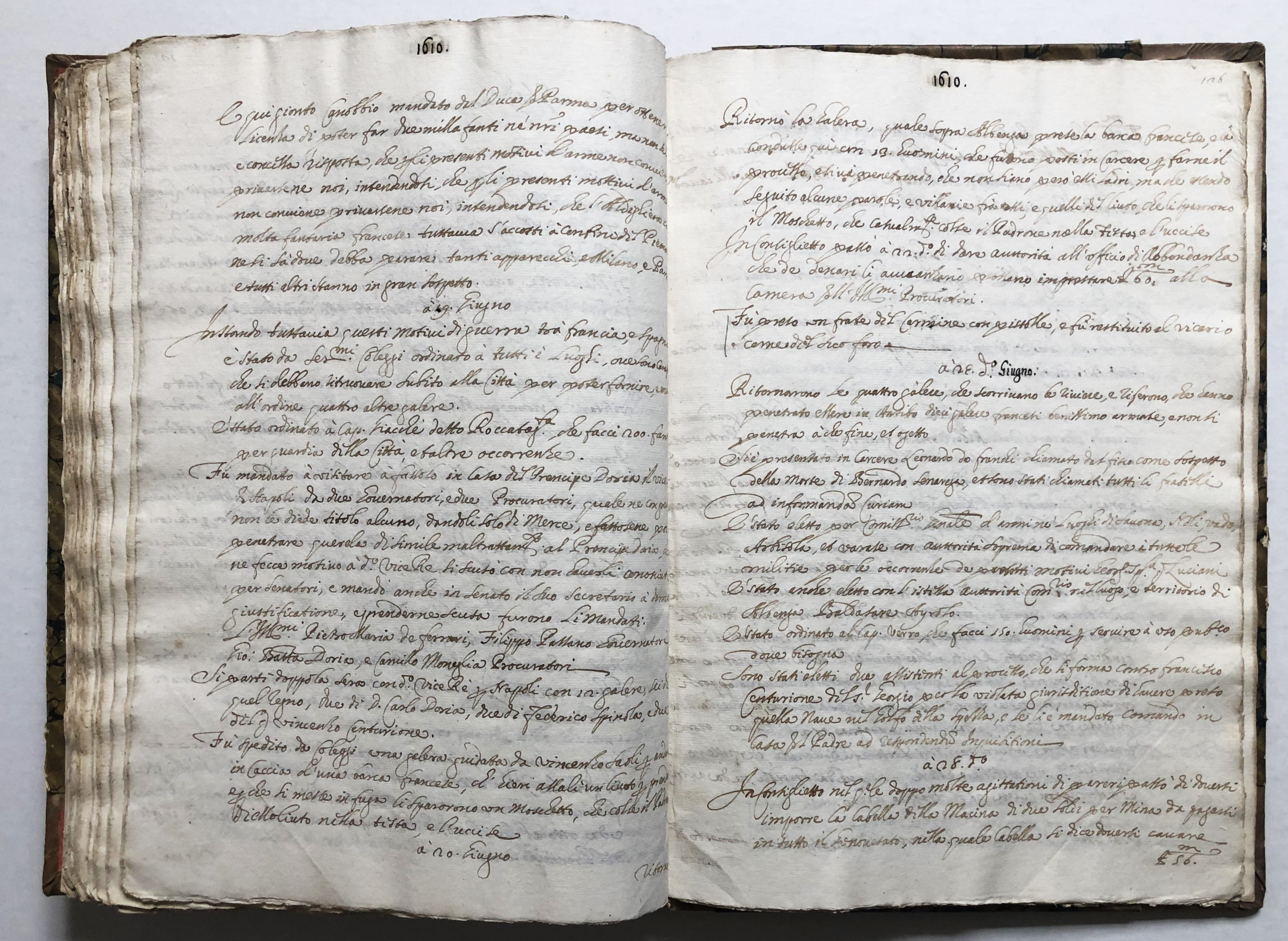 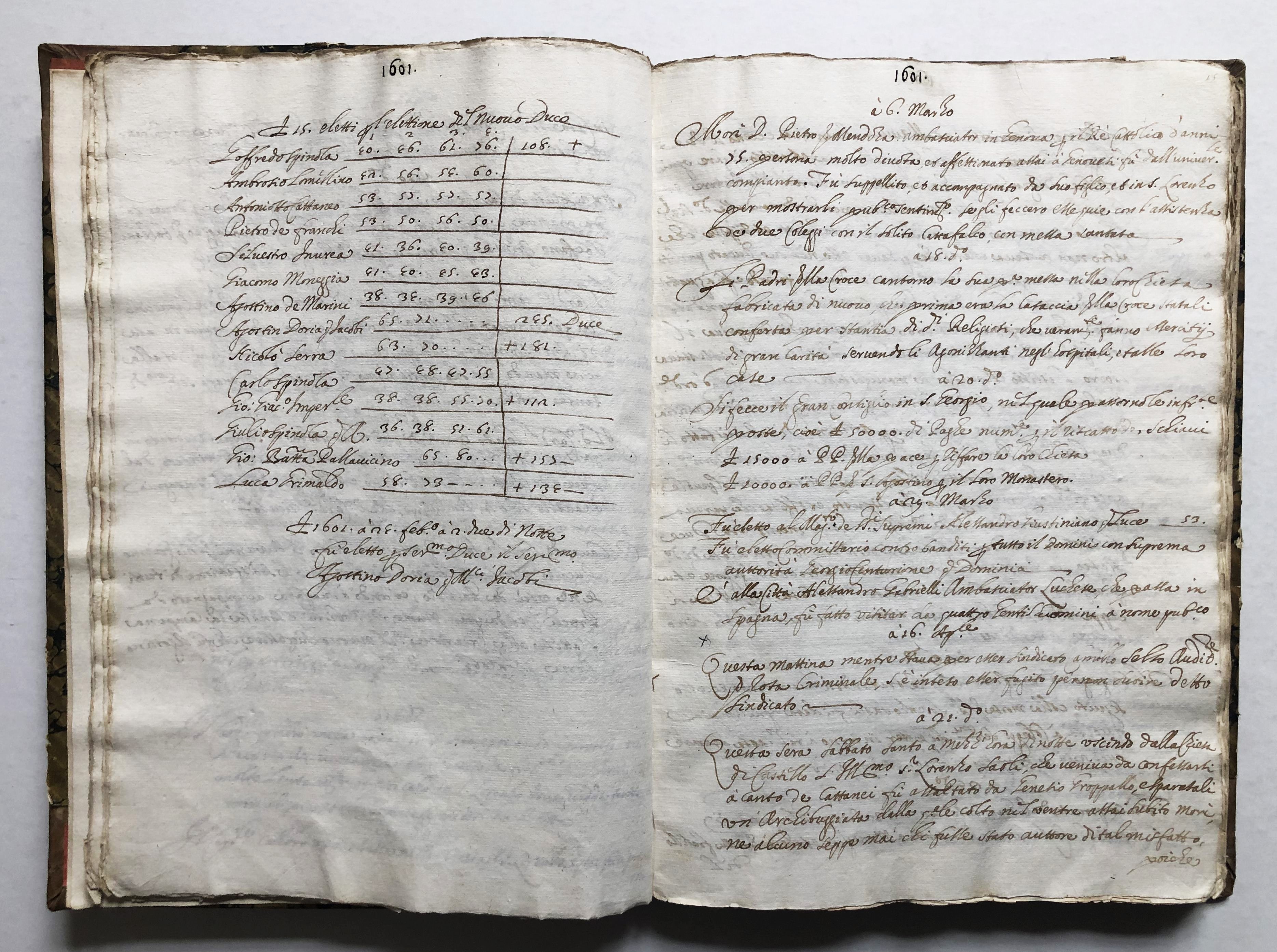 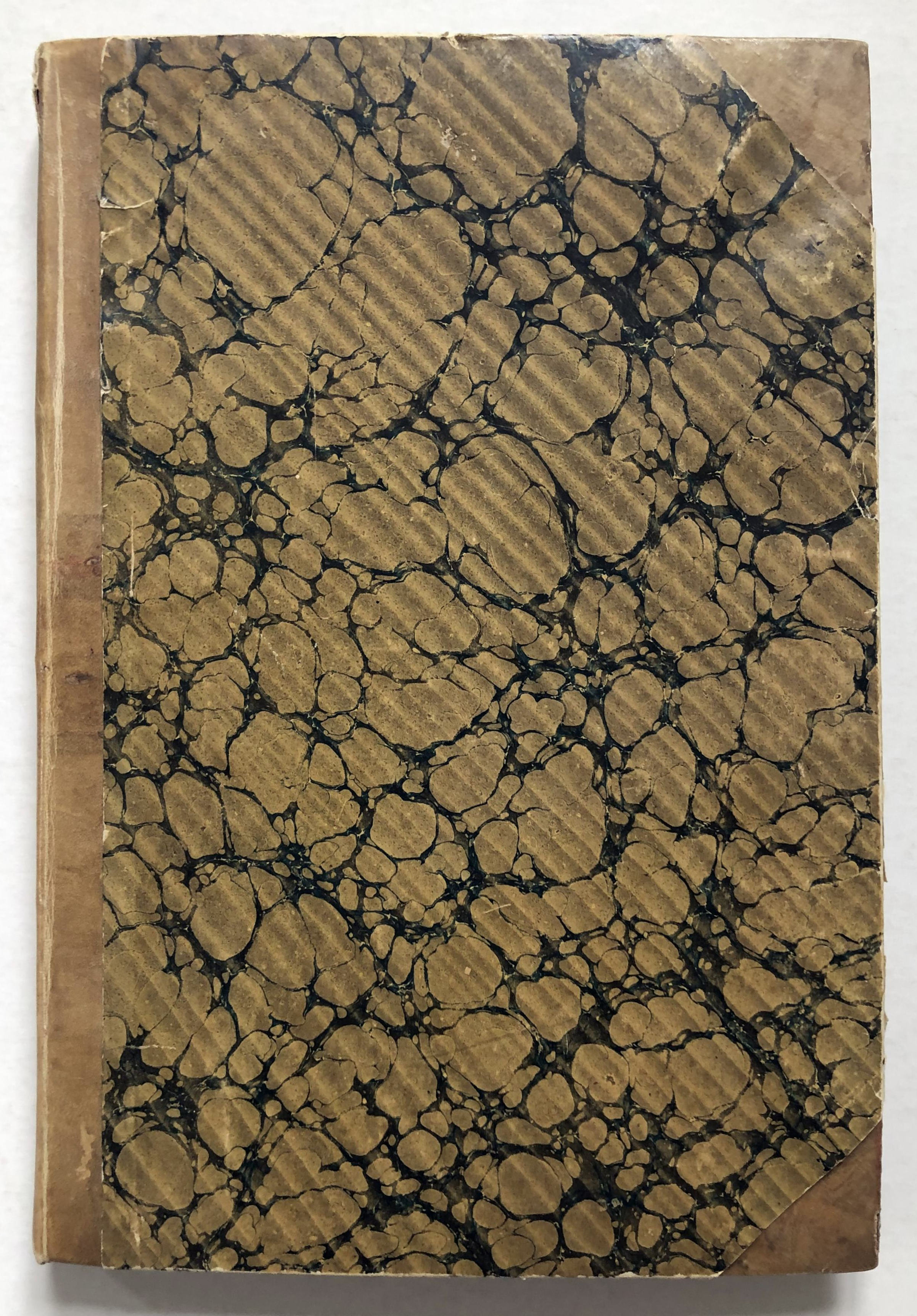