A very rare caricature depicting Napoleon in a nightmare seeing his past misdeeds, such as the ‚Invasion of England‘, ‚Ghost of 3800 murdered Turks on the Sand Hills of Syria‘, ‚580 sick Soldiers poisoned in the Hospital of Jaffa‘, ‚Massacre at Paris 18 Vendimiaire‘ whilst the ghosts of the murdered asking for „revenge“. Napoleon holding in his right hand a map of Malta, referring to the French Blockade or the Siege of Malta in 1798-1800, and in his left hand a rolled map of England, referring to his plan to invade England. On the table beside Napoleon’s bed the following papers are lying: ‚Plan of invasion to England‘, ‚Plan for the annihilation of English commerce, capital & credit‘, ‚Decree of arrest of all the English in France‘. Certainly influenced by Gillray’s „Political Dreamings“ caricature from 1801. The present caricature is much more scarce. 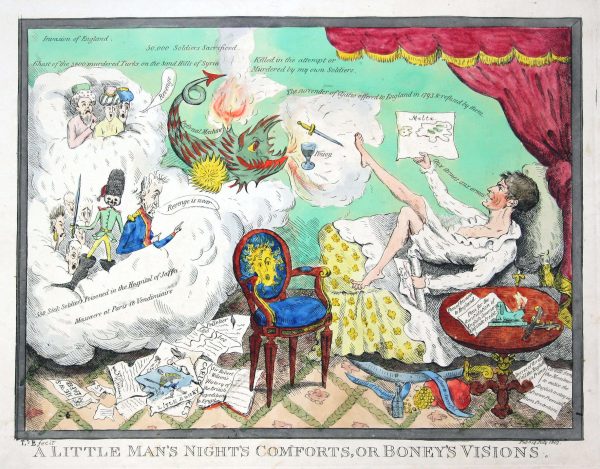