Startseite/Bestand/Books/Geographie, Reisen, Länder- u. Völkerkunde, Geschichte, Handschriften, Kultur- u. Sittengeschichte/Highly important unpublished eyewitness diary of the famous tour of France by emperor Joseph II in 1777, revealing, among other things, the true circumstances of the meetings with Benjamin Franklin and Jean Jacques Rousseau

Highly important unpublished eyewitness diary of the famous tour of France by emperor Joseph II in 1777, revealing, among other things, the true circumstances of the meetings with Benjamin Franklin and Jean Jacques Rousseau

The trip to France by the Holy Roman Emperor Joseph II (1741-1790) was one of the most important and most famous royal voyages in the 18th century. The main purposes of the journey were the improvement of the relations between France and the Holy Roman Empire and the support of the shattered marriage between Louis XVI of France and Marie-Antoinette, Joseph’s sister. The trip began on April 1, 1777 at Vienna. The emperor travelled under the pseudonyme Count of Falkenstein and was accompanied by the Austrian general Joseph von Colloredo (1735-1818), the diplomat Ludovico, Count di Belgiojoso (1728-1801), the physician Giovanni Alessandro Brambilla (1728-1800) and Philipp von Cobenzl (1741-1810), the author of the present manuscript. The voyage led over Munich, Stuttgart, Strasbourg and Metz to Paris, and after a six week residence in the French metropolis back over Brest, Bordeaux, Toulouse, Toulon, Marseille, Geneve, Basel and Freiburg.

Joseph II was eager for knowledge on every aspect of the French Empire and not only visited the famous places of interest but especially hospitals, poorhouses, schools, fortifications, factories, shipyards and so on. He met many members of the royal family and the high nobility as well as bankers, writers, scientists and artists. The journey caused a sensation amongst the French population and many pamphlets and books had been published on it.

One of the most piquant tasks of the trip was certainly Joseph’s conversation with the royal couple concerning their marital duties. Since their wedding in 1770, the royal couple was unable to witness a descendant, so Joseph II asked them about the reasons for not having an offspring and gave them useful tips. The advices were apparently successful, since one year later the first of four royal children was born. On May 15, Cobenzl even mentions in the present diary a conversation between himself and the emperor referring to this delicate matter.

Joseph also kept a diary during the trip which is now in the National Archives of Austria. His diary and letters written during the journey were to date the only first hand accounts of the voyage. Again and again during the trip the emperor and his entourage spent some time autonomously, thus Cobenzl’s manuscript provides some important informations hitherto unknown. Two of the most important characters Cobenzl met independently were Benjamin Franklin and Jean Jacques Rousseau. To this day historians speculated wheter or not Joseph II could have met one or both of these highly important characters, eventually the present manuscript reveals the circumstances of both meetings and also a two-hour conversation between Cobenzl and Rousseau, demonstrating to Cobenzl the philosopher’s unique personality. Cobenzl independently met, among others, the Russian minister of education Ivan Shuvalov, the composer Christoph Willibald Gluck, the architects Victor Louis and Bertrand Garipuy, the mathematicians Nicolas de Condorcet and Charles Bossut, the economists Pierre Samuel du Pont de Nemours and Victor de Riquetti Marquis de Mirabeau, physicist Johann Jakob Hemmer, adventurer Maurice Benyovsky, and the collector and bibliophile Justin MacCarthy Reagh.

Cobenzl wrote his diary in the evenings shortly before going to bed. He mentioned the daily routine beginning with the compulsory church service, the visited places, the met persons and the leisure activities. Cobenzl gave many evaluations and sometimes described his experiences in great detail. Among the persons who left the most impression on him were Charles-Michel de l’Epée (founder of the first school for the deaf – Cobenzl describes his methods as „the most interesting thing in Paris I have seen“ ), naval constructor Antoine Groignard, philosopher Jean Jacques Rousseau, Justin MacCarthy Reagh, Maurice Benyovszky, architect Victor Louis and the physicist and magician Nicolas-Philippe Ledru, known as Comus. Cobenzl gives detailed descriptions of his visits of the Hotel de Condé in Paris, the Savonnerie manufactory of carpets, the Congregation of the Good Shepherd in Toulouse, the Maison Carrée in Nimes, the porcelain manufactory of Sevres and the Grand Theatre in Bordeaux.

The diary further mentions some very interesting meetings namely magician Nicolas-Philippe Ledru, known as Comus, demonstrating some experiments and magical tricks which were such impressing that Cobenzl visited him twice, naval constructor Antoine Groignard presenting some of his ship models, geologist Horace-Benedict de Saussure showing some of his glacier drawings and performing electrical experiments, engraver Christian von Mechel presenting the beginnings of his book „La galerie electorale de Düsseldorf“, architect Victor Louis revealing his plans in lieu of the chateau Trompette, architect Bertrand Garipuy introducing his plan for a canal, painter Jean-Baptiste Greuze presenting his painting „La Malediction paternelle“, Claude-Henri Watelet showing the gardens on his island in the Seine river, Maurice Benyovszky narrating some of his adventures, the collector Justin MacCarthy Reagh presenting his famous book collection, the physicist Felice Fontana demonstrating some experiments, the architect Jacques Germain Soufflot presenting plans and models for the church of St. Genevieve which later became the Pantheon, the painter Hubert Robert presenting some of his landscape paintings, engineer Antoine-Joseph Loriot examining his famous mortar, inventor Jacques de Vaucanson presenting some of his machines and silk manufacturer Elisabeth Charrye, the wife of Philippe de Lasalle, introducing some of her husband’s technical inventions. In La Rochelle the emperor and his fellow travellers witnessed some early experiments with naval mines („torpille“), and Cobenzl compared their effects to those of a ‚Leyden jar‘. The diary also mentions a few several hours of conversations between the emperor and for example Etienne-Charles de Lomenie de Brienne, Jean-Joseph de Laborde, Pierre-Augustin Guys and Joseph von Haller.

Furthermore the manuscript reveals many interesting insights into the daily life and the leisure times of the high nobility. During the whole journey Joseph and his entourage visited quite a few theatre and opera performances. On several occasions Marie-Antoinette played billard and other games with members of the aristocracy. On the second evening in Paris the Queen sang an Italien aria for her brother, accompanied by a cembalo. On April 21 Gaetano Besozzi and Jean-Joseph Rudolphe performing a concert with several singers at Versailles. On April 24 Joseph II, Cobenzl, Henry Swinburne and David Murray, 2nd Earl of Mansfield played jeu de paumes (a forerunner of tennis), on April 26 the emperor and his entourage visited a British horse race at the Plaine des Sablons and Maximilian III Joseph, Elector of Bavaria played viol in a chamber music concert at Munich. Cobenzl also visited a coiffeur, bought a telescope and Alencon lace, among other things. While visiting the shipyards in Brest and Toulon, Joseph II and his fellow travellers inspecting the following French ships: HMS „Robust“ (1764), „Magnifique“ (1750), „Bretagne“ (1766), „Bizarre“ (1751) and „Languedoc“ (1766).

Joseph understood himself as a „servant“ of the state and felt obliged to the advancement of the common good. During the ten years in which Joseph was the sole ruler of the Habsburg Monarchy (1780–1790), he attempted to legislate a series of drastic reforms to remodel Austria in an ideal enlightened state. Paris was one of the centers of enlightment at that time and Joseph’s experiences during the present trip changed quite a few of his personal and political views. The present journey to France had some great impact on Joseph’s policy which is known today as Josephinism.

The present diary is an exceptional and highly important first hand account for one the most famous royal voyages in 18th-century Europe, providing unique insights into the French royal dynasty shortly before the French revolution and offering a wealth of information on many of the leading scientists, artists and aristocrats at that time.

Cobenzl’s yet unpublished diary represents the only source for a multitude of informations of Joseph’s famous voyage to France and therefore is of the utmost importance.

The present diary mentions meetings with numerous individuals including the following:

Bound at end are two manuscipt letters by the brother of Samuel Auguste Tissot, requesting financial help from Cobenzl according to difficult economic circumstances. 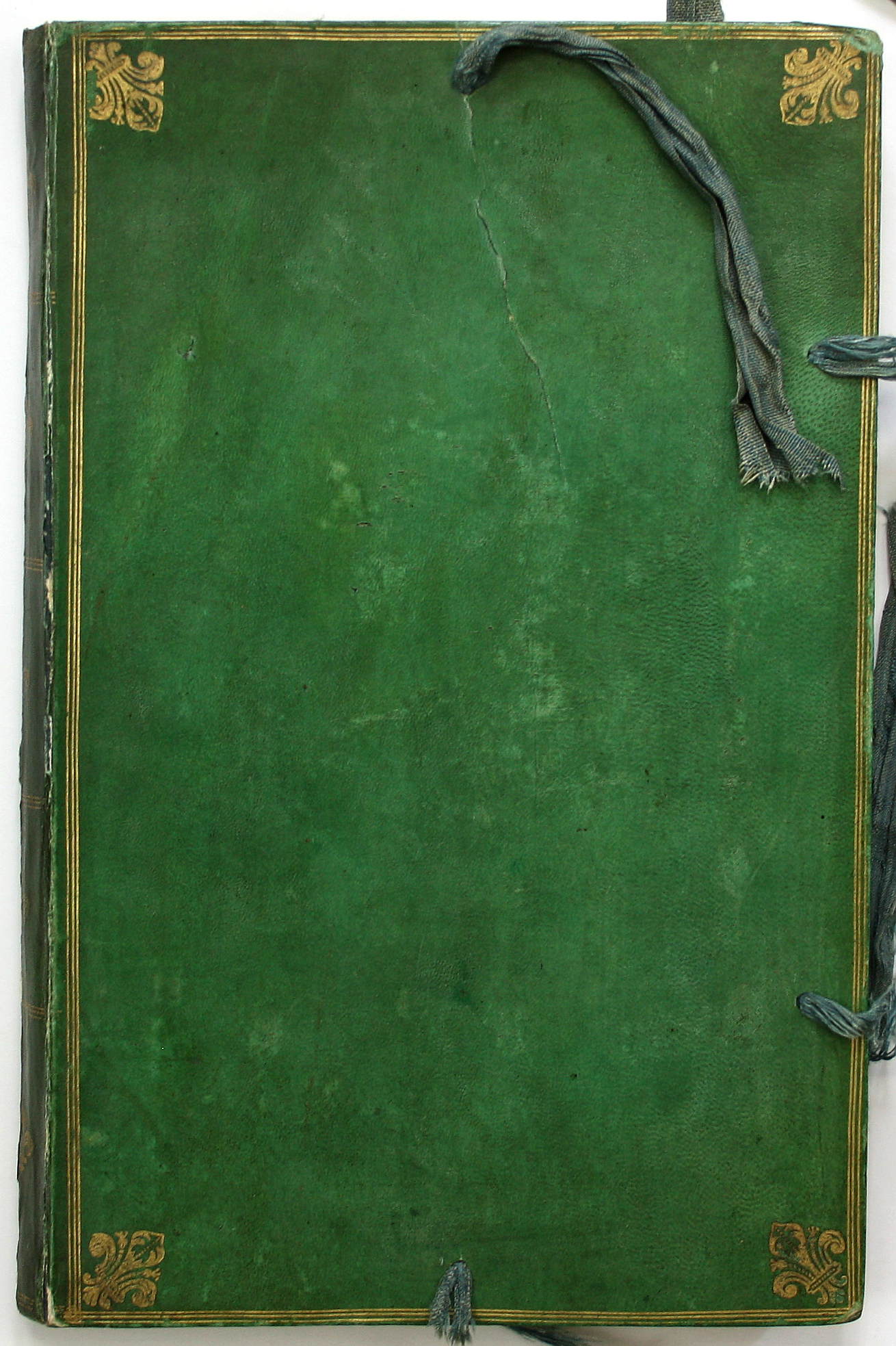 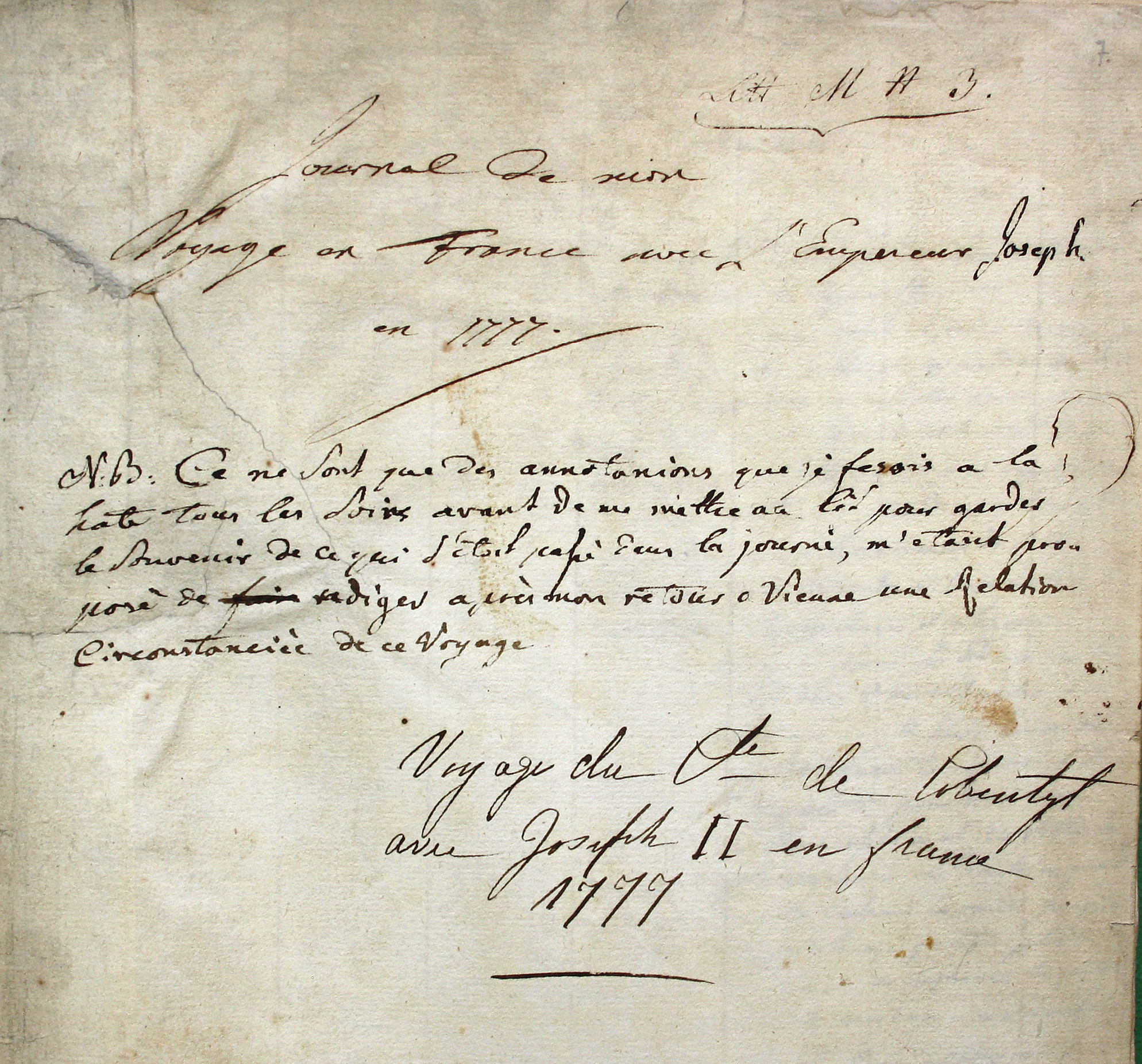 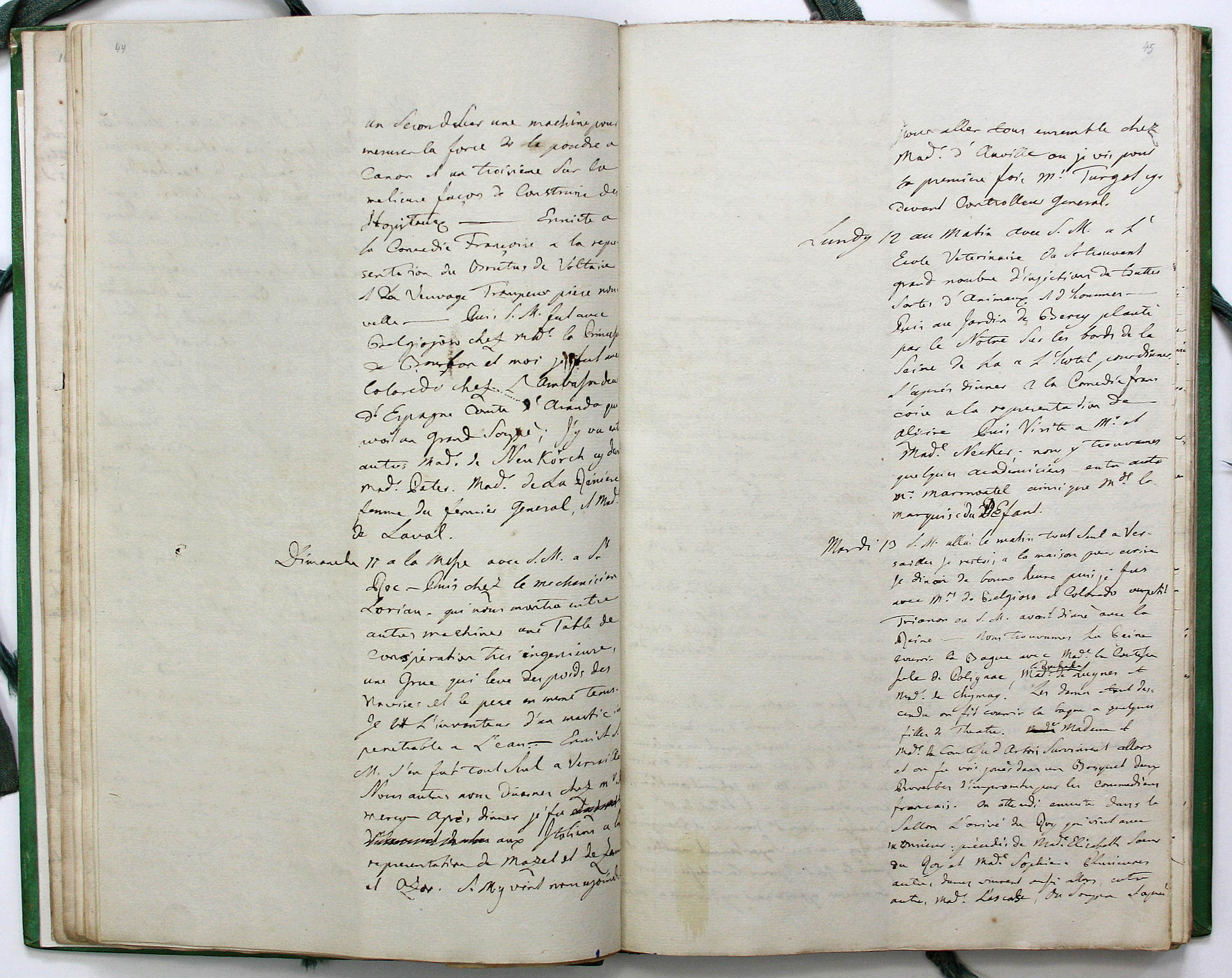 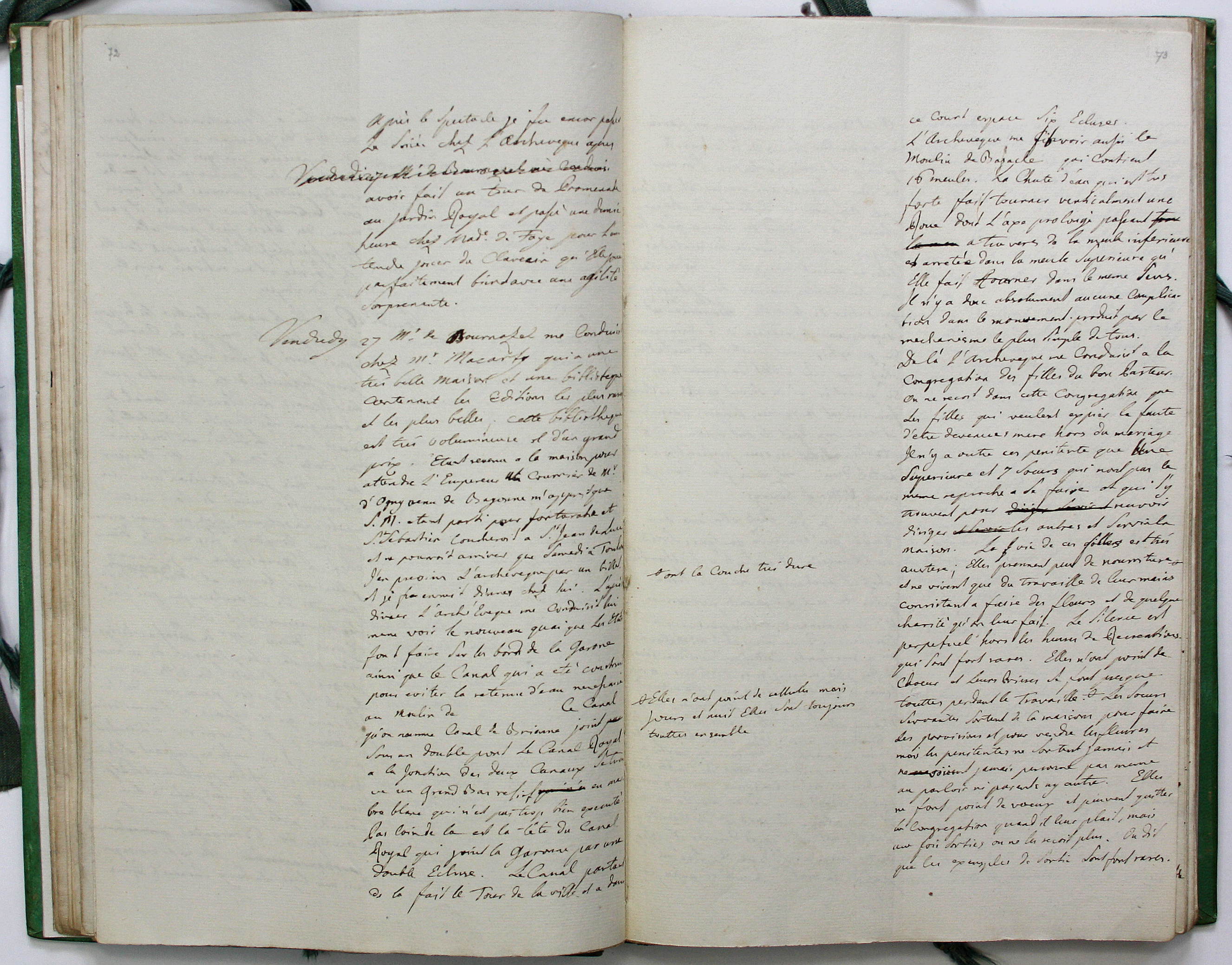 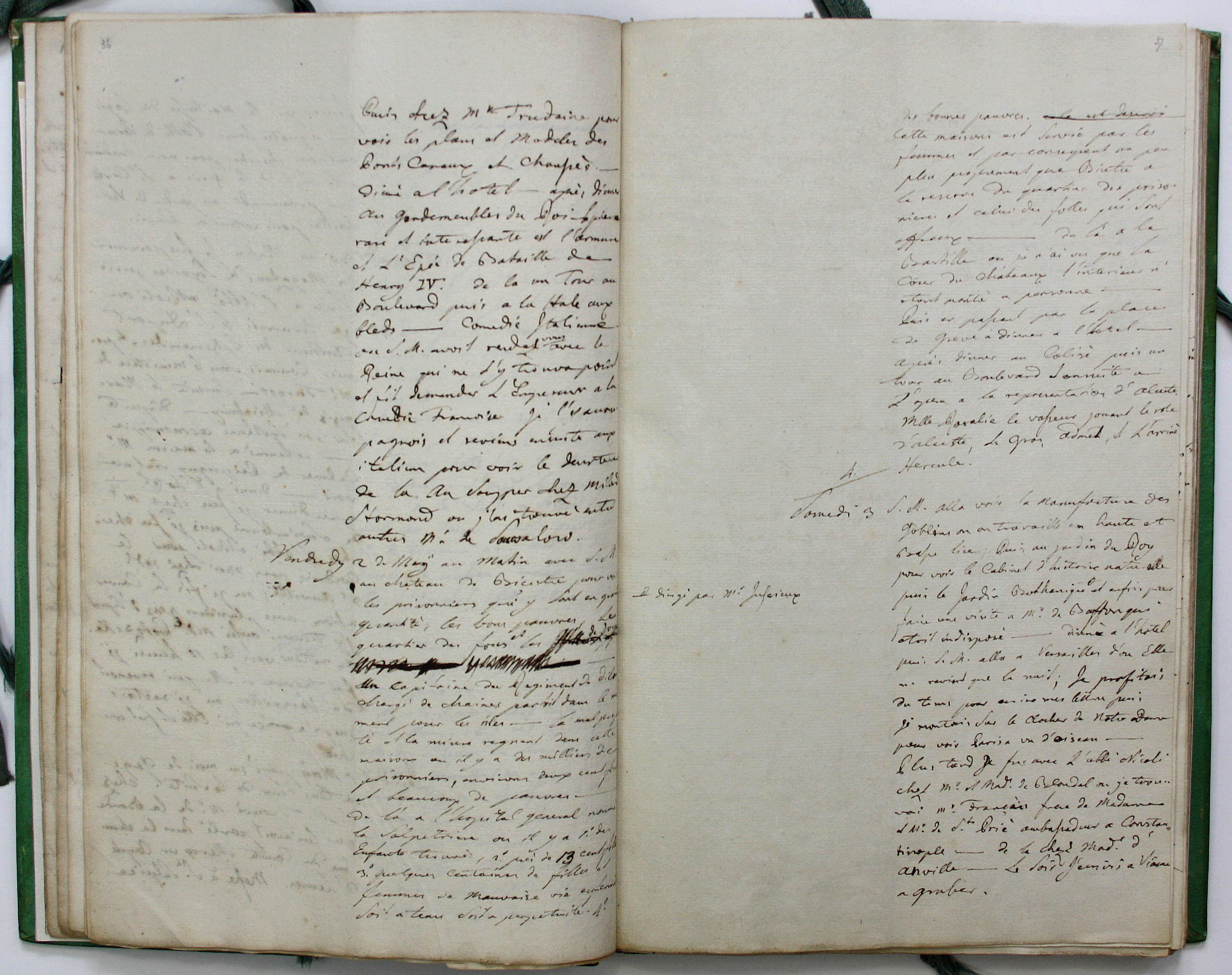