The present armorial is the most extensive, and artistically most valuable surviving Silesian armorial from the 16th century. It was used as the direct model for the first printed Silesian armorial, the Scharffenberg’sche Wappenbuch, as well as for the the Silesian section in the first two volumes of Siebmacher’s Wappenbuch. It is therefore the most important source for unadulterated Silesian coat of arms from the 16th century.

We attribute the present manuscript to Johann Ambrosius Siebmacher (1561-1611), a German coat of arms painter, engraver and publisher. His major work is his extensive Wappenbuch, which is one of the most important sources of heraldry of the German speaking regions. Siebmacher himself edited only two volumes in 1605 and 1609 in Nuremberg. After his death in 1611, the work was continued by Paul Fürst, who had acquired Siebmacher’s copperplates and published further volumes in 1656, 1657 and 1665.

Surprisingly, nothing is known about Siebmacher’s apprenticeship and life in Nuremberg. This could be because he probably spent a long time abroad. The present manuscript demonstrates that Siebmacher had close ties to Wroclaw, and perhaps there he received his education as a heraldist, engraver and printer. Siebmacher’s stay in Silesia could also provide the answer to why the Silesian section in the first volume of his Wappenbuch is the largest of all.

The present manuscript originally consisted of two seperate volumes with 52 and 100 leaves. In the 18th century, the then owner renumbered both volumes, added a new handwritten (sometimes faulty) register and had them bound together in a contemporary quarter vellum binding. Whilst the paper of both original volumes bear the same watermark (coat of arms of Wroclaw), the later added register bears a crowned Wroclaw ‚W‘, indicating that both parts were created (and rebound) most probably in the city of Wroclaw, although in different centuries.

Due to the use for Siebmacher’s Wappenbuch, the present armorial must have been created before 1605. But the coat of arms of Julius Landau could provide information about a more exact dating. The register lists it under „Julius Landus Canonicus Wra.“ Landau became priest (canon) in 1574., in 1581 he was called to the archdeacon and from 1601 to 1605 he was dean in Wroclaw. According to Landau’s rank in the register, it could be assumed that the manuscript was created before 1581. What we can say with certainty is that the manuscript must have been written after 1578. Andreas Jerin, dome provost and later Bishop of Wroclaw, was raised in 1578 in the peerage. His coat of arms is also included.

The coats of arms within the present manuscript are ordered neither alphabetically nor by rank or profession of their bearers. The compiler obviously obtained the coats of arms from various sources, and inserted them in the order of reception. The extent and quality of the work suggests that this was a commissioned work, which may even have been intended for later publication. And indeed, the first printed Silesian armorial, the Scharffenberg’sche Wappenbuch, was actually produced in Wroclaw at the same time.

Until today, the Scharffenberg armorial applied to be the oldest printed Silesian armorial. It was printed around 1578-1585 at the printing press of Crispin and Johann Scharffenberg in Wroclaw. The most extensive copy contained circa 2200 coats of arms, with an incomplete index of 1244 names, but it has been lost during WWII. From originally 8 known incomplete copies, 6 are remaining in European libraries. The most complete Berlin copy has 986 coats of arms.

It is noteworthy, that the the present manuscript has rather the same number of coats of arms as the original copy of the Scharffenberg’sche Wappenbuch. We were able to state that the manuscript contains (almost) all the Silesian coats of arms that are contained in the remaining Scharffenberg copies. In addition, there are a certain number of plates in both armorials, on which the arrangement of the coats of arms resemble. Such coats of arms, that are not present in our manuscript, have in most cases not a Silesian origin. The Scharffenberg armorial contains, among others, numerous Augsburg coat of arms, which may have been due to the fact that the wife of the sponsor Nikolaus Rhediger originally came from that city.

It seems that the Scharffenberg workshop was less concerned with the accurate representation than with the decorative depiction of the coats of arms. This becomes clear when comparing the delineations with contemporary and older sources. Obviously the Scharffenberg workshop redesigned many of the coats of arms on their own which is an understandable practice when considering that this armorial was planned for a single client rather than for a large readership. According to the many different representations, the present manuscript could not have been copied after the Scharffenberg armorial. Furthermore, numerous coats of arms within Scharffenberg are again mirror inverted images from the ones in the present manuscript which causes us to assume a reverse dependency.

When exactly Siebmacher returned to Nuremberg is also not known. He published his first graphic works there around the year 1590. In 1596 he published a small armorial, which, however, has no match with his later Wappenbuch. In 1597 and 1601, he printed two ornamental books for goldsmiths, all of which had the same format as the present manuscript.

This armorial is the only surviving manuscript by Johann Siebmacher. The only other known manuscript by him was in the former collection of Hans Albrecht von Derschau. This manuscript consisted of 27 sheets with paintings of crests and was dated 1610. The collection was auctioned in 1825 and the Siebmacher manuscript has since disappeared.

The present armorial is of outstanding importance. It is the first known Silesian armorial. Furthermore it is the only surviving manuscript armorial by Johann Siebmacher and at the same time the artistically most valuable surviving Silesian manuscript armorial from the 16th century. It represents the most important source for unadulterated Silesian coats of arms from that era.

(A list of the coats of arms in the present manuscript, which are included in the Siebmacher volumes of 1605 and 1609, is available upon request.) 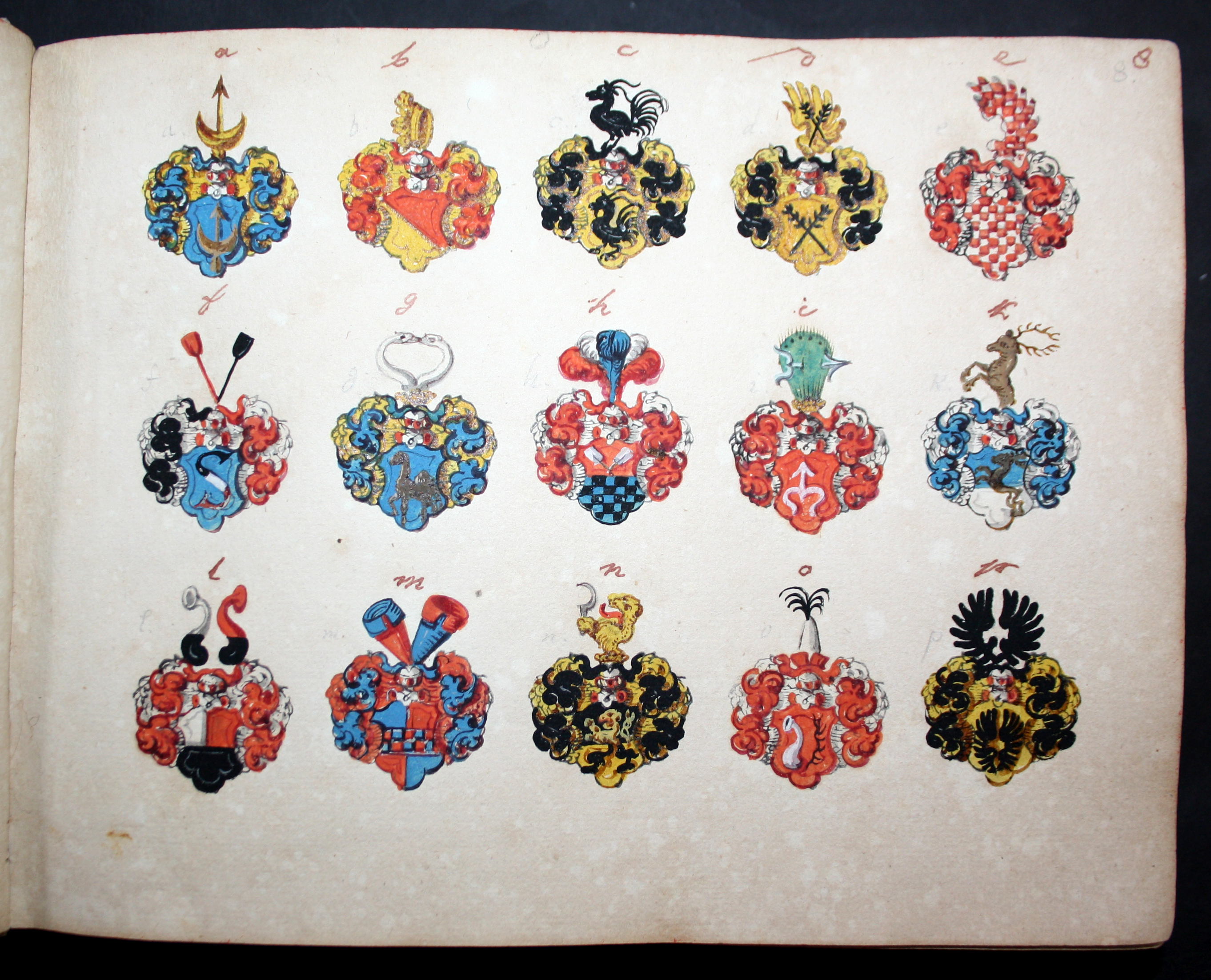 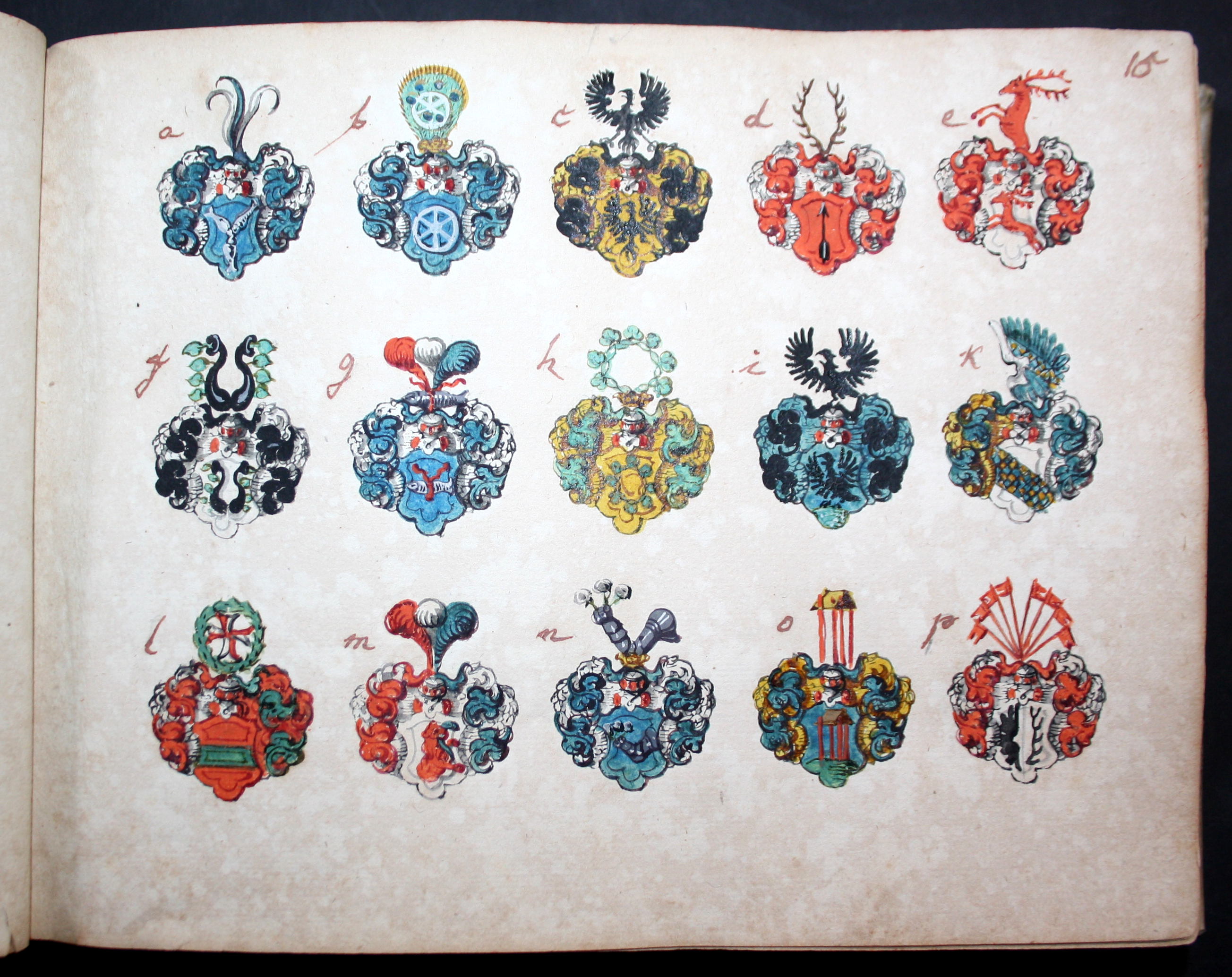 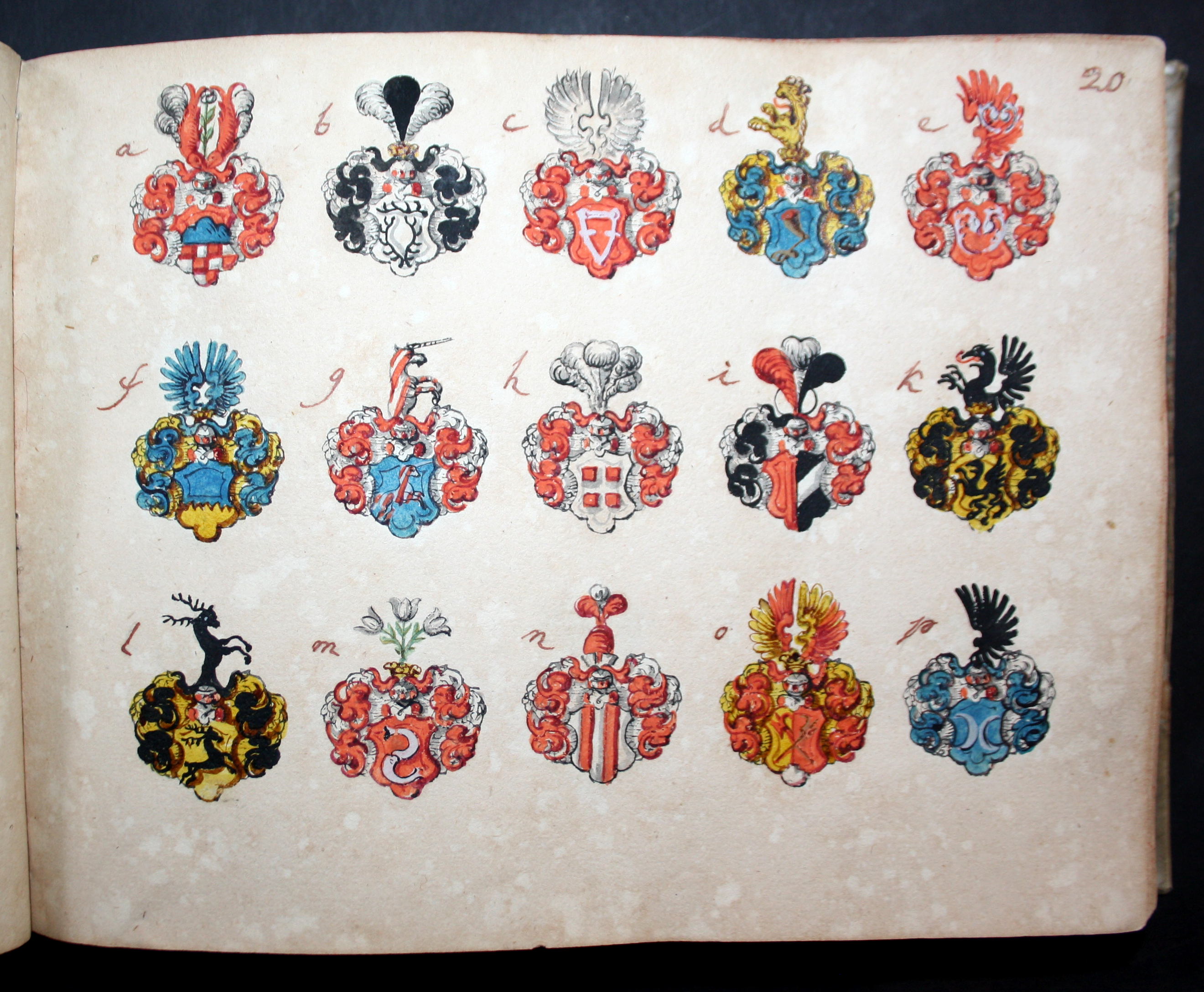 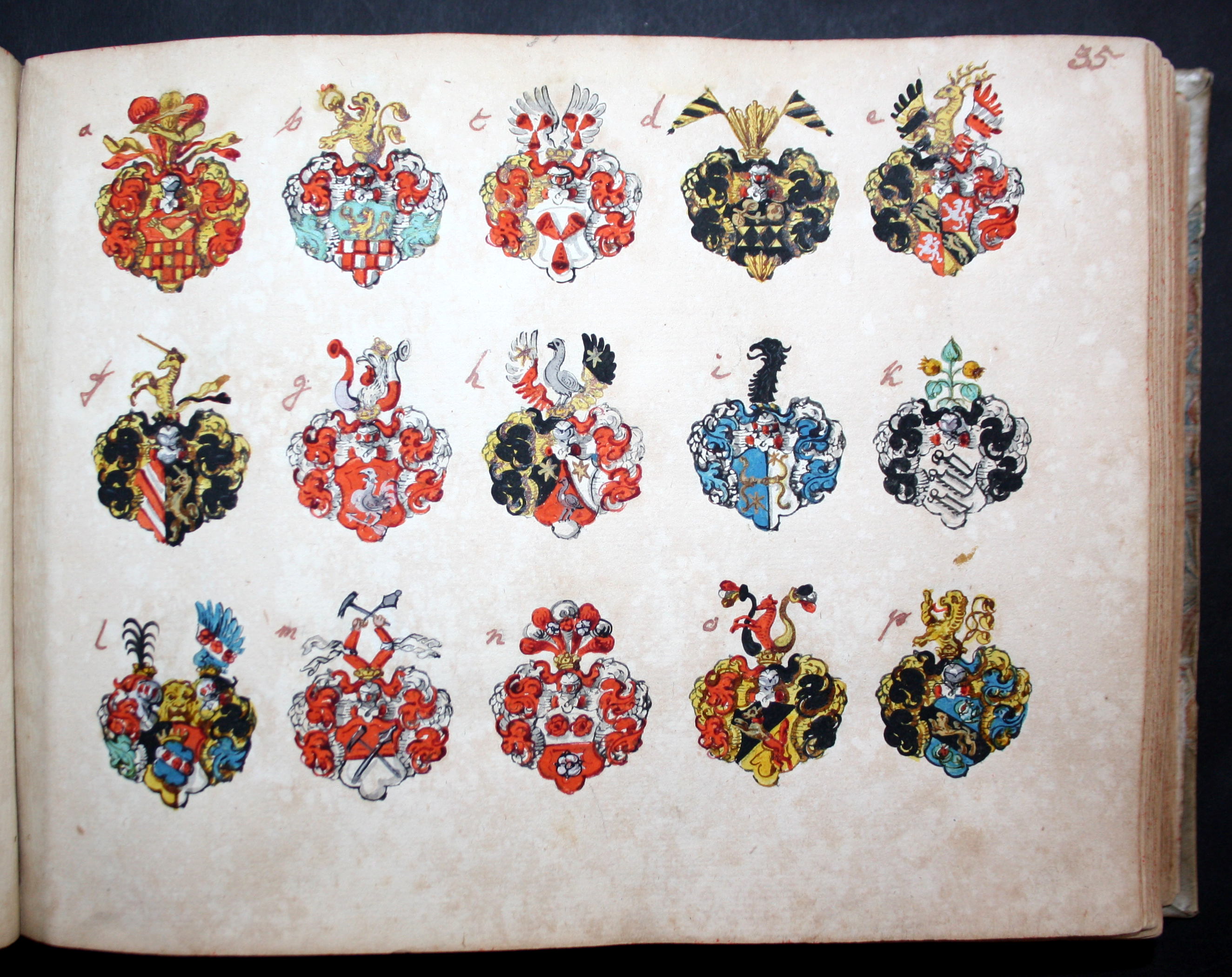 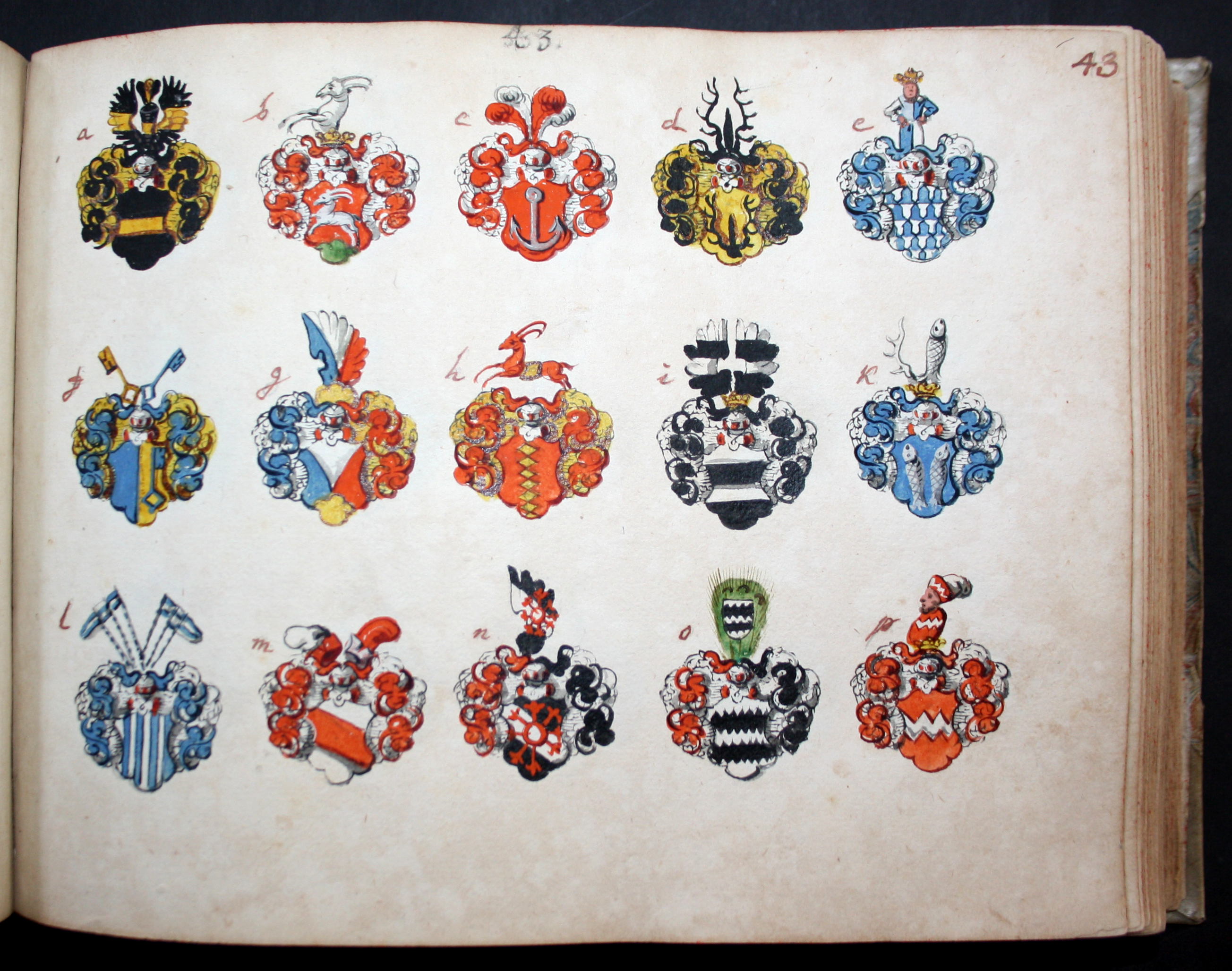 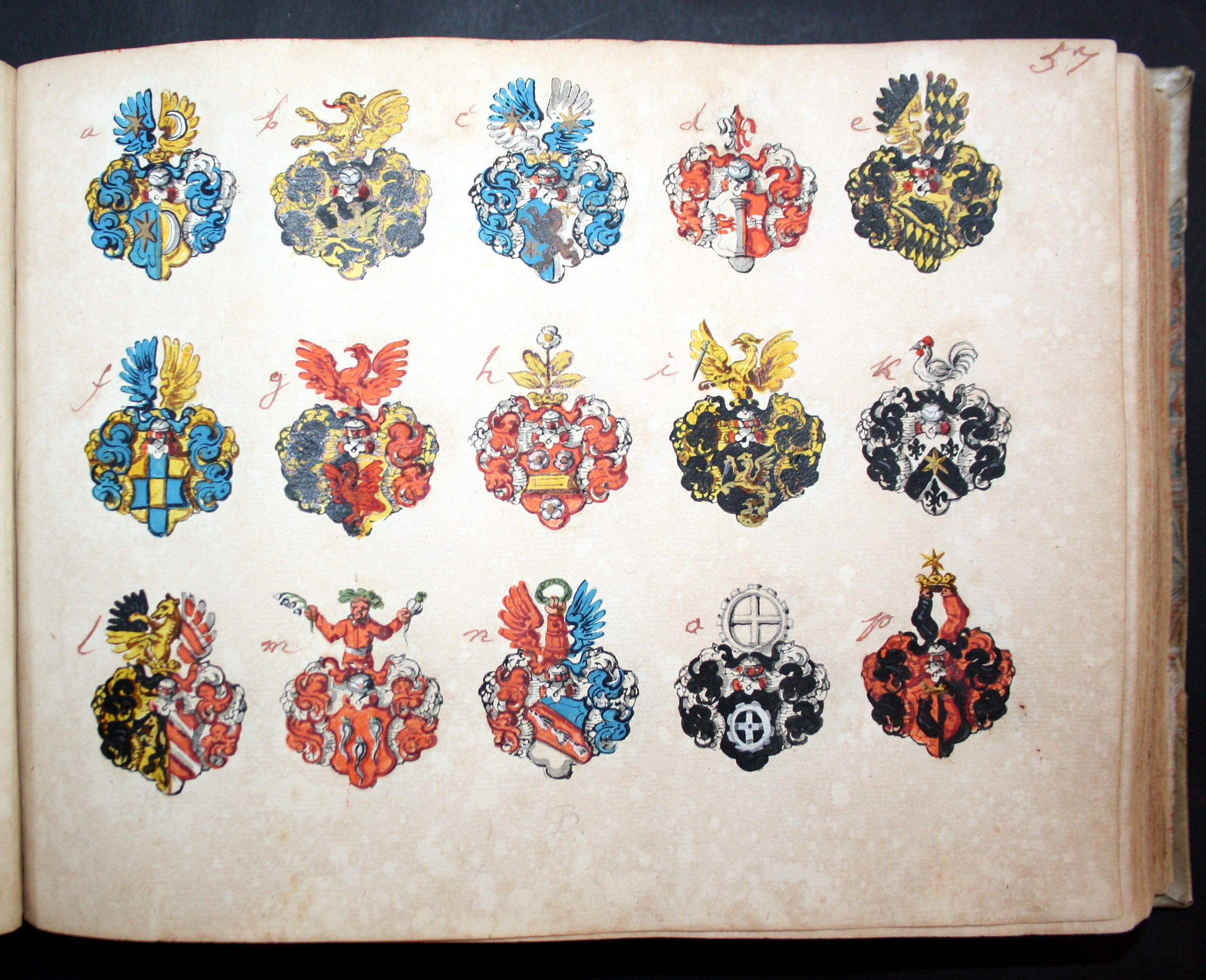 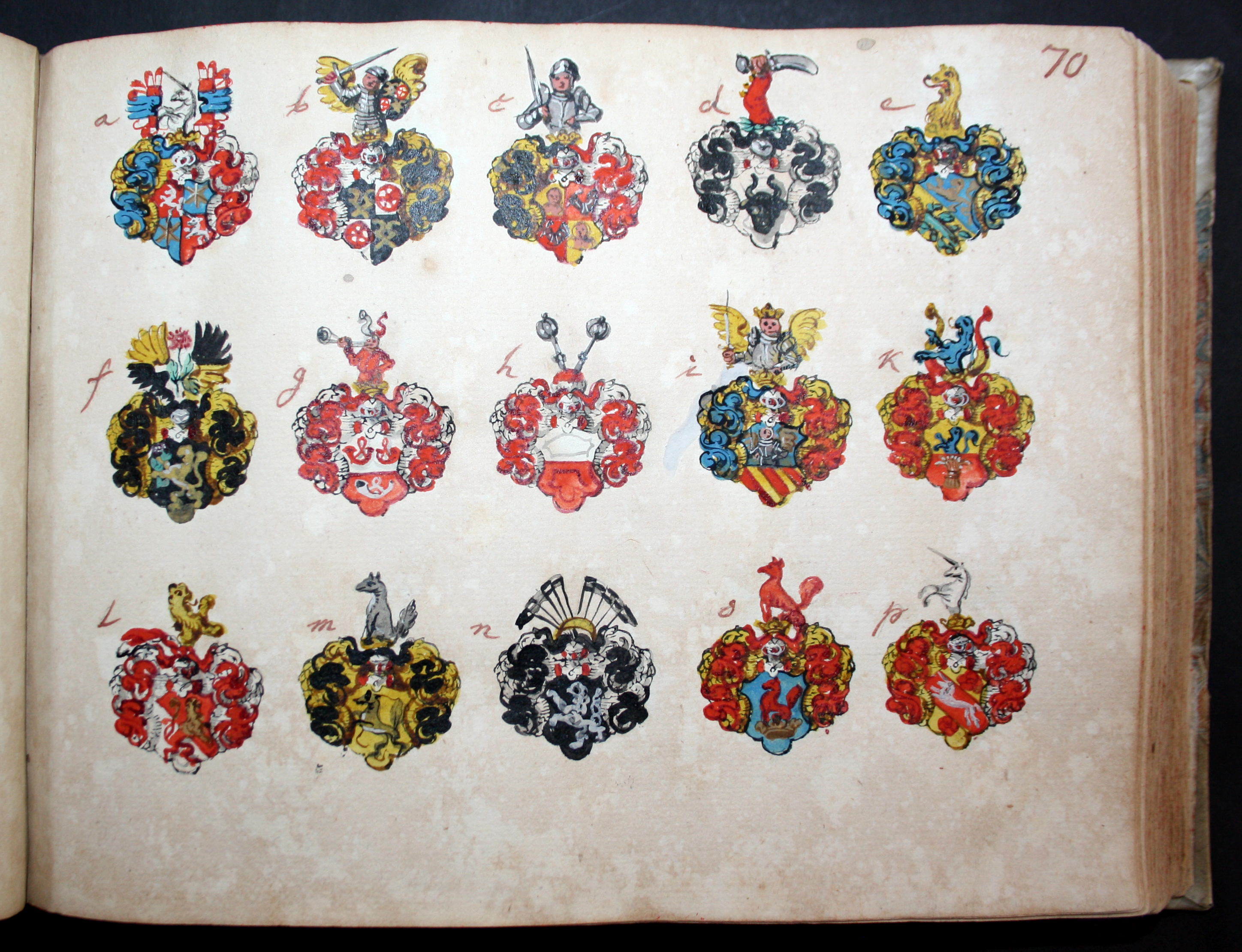 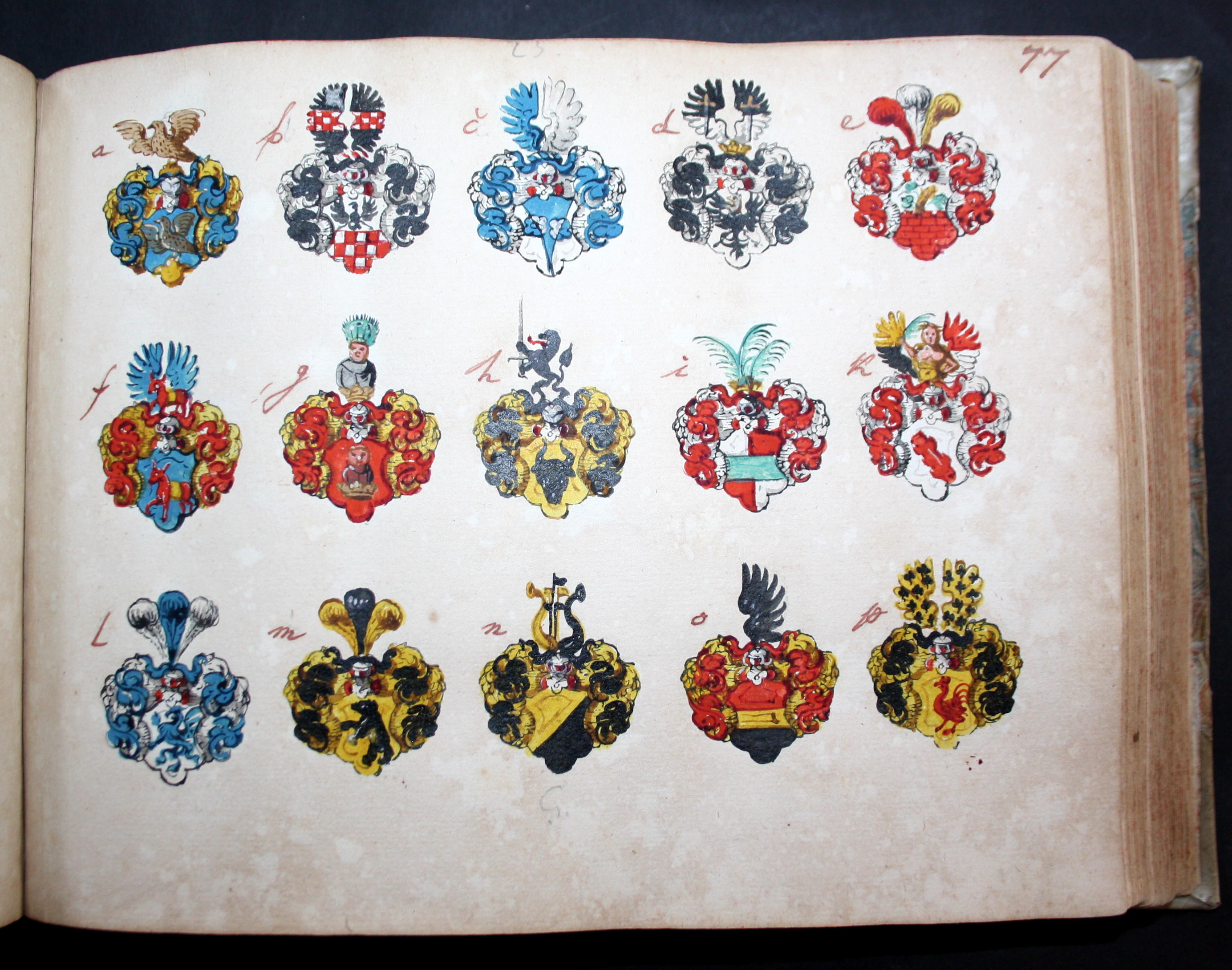 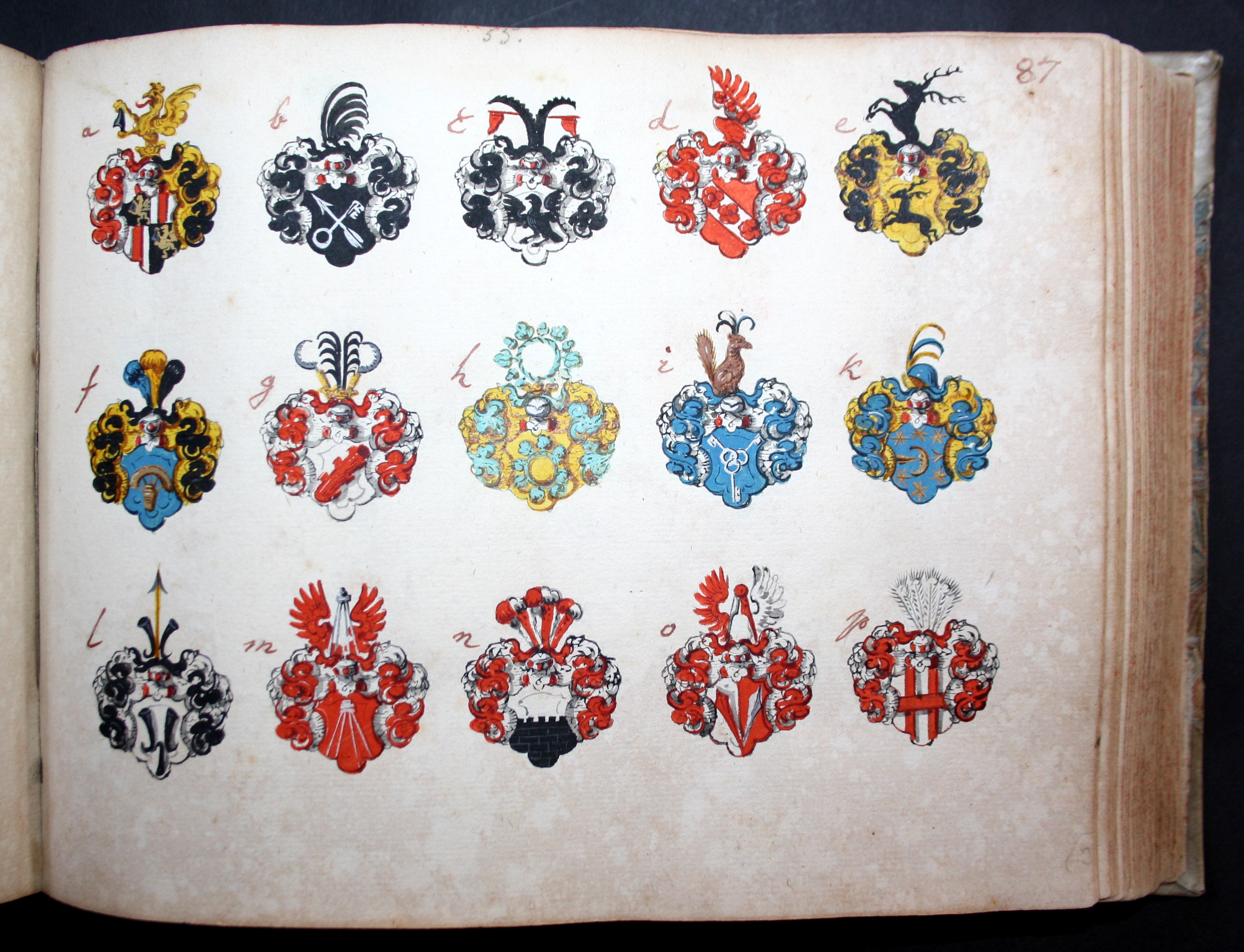 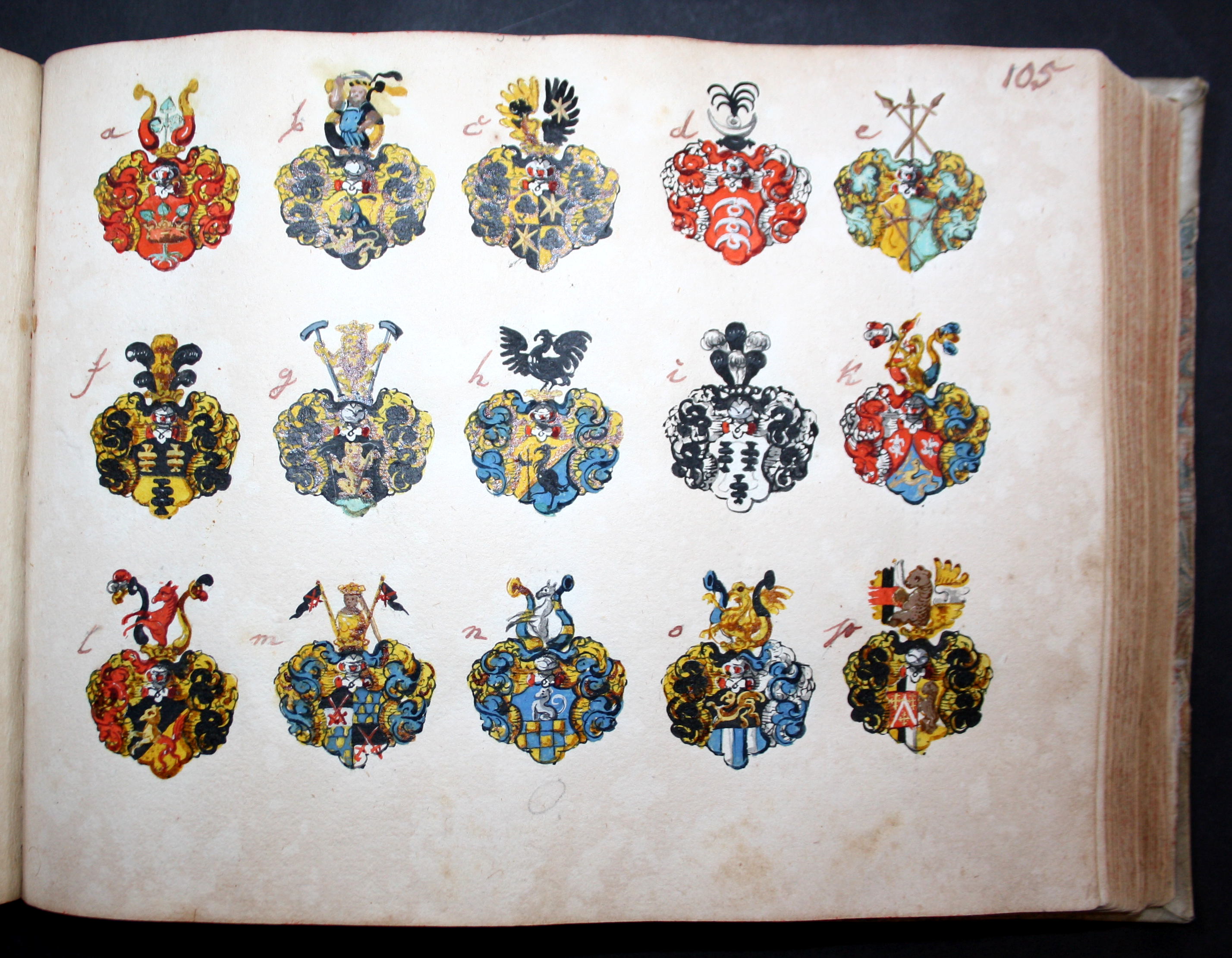 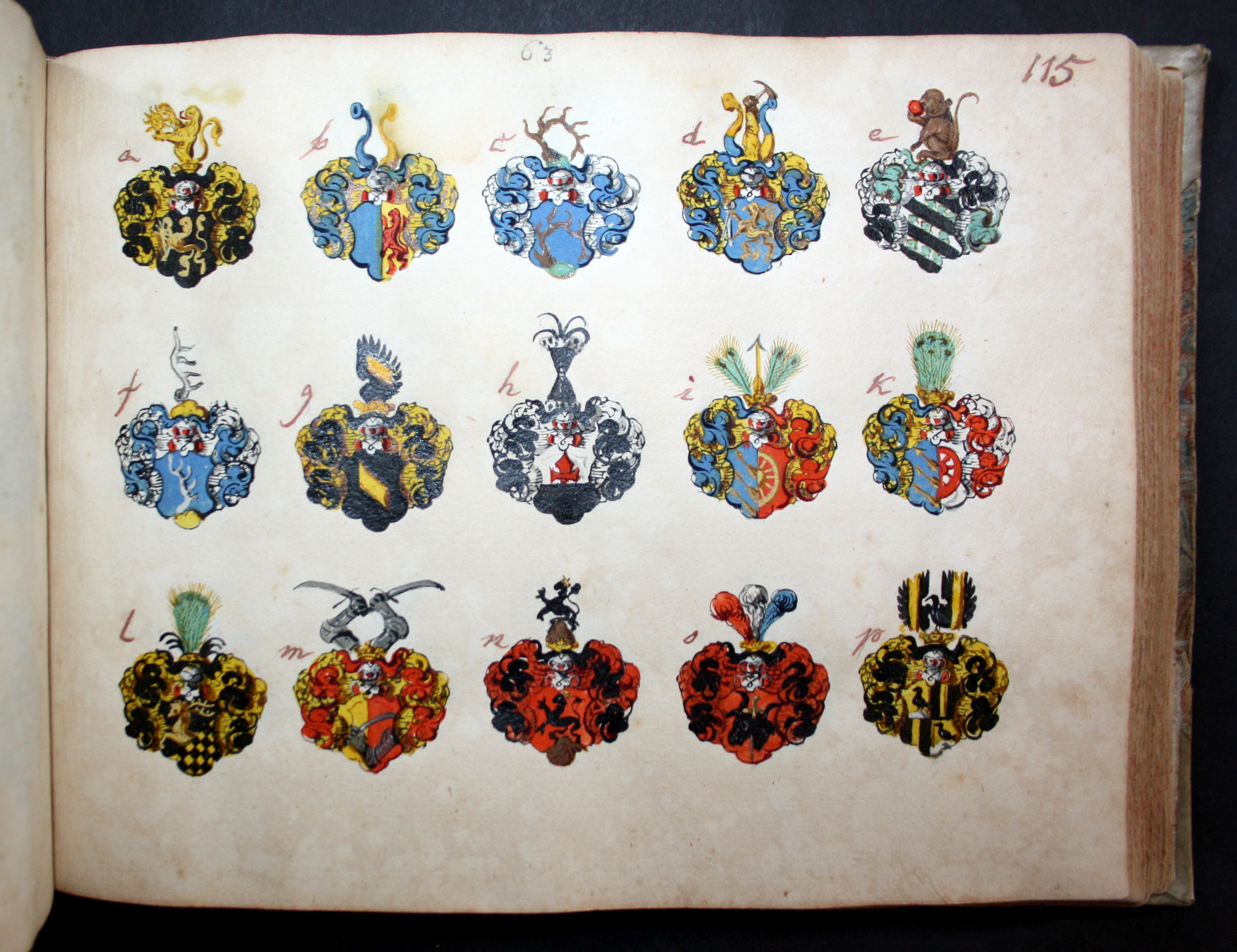 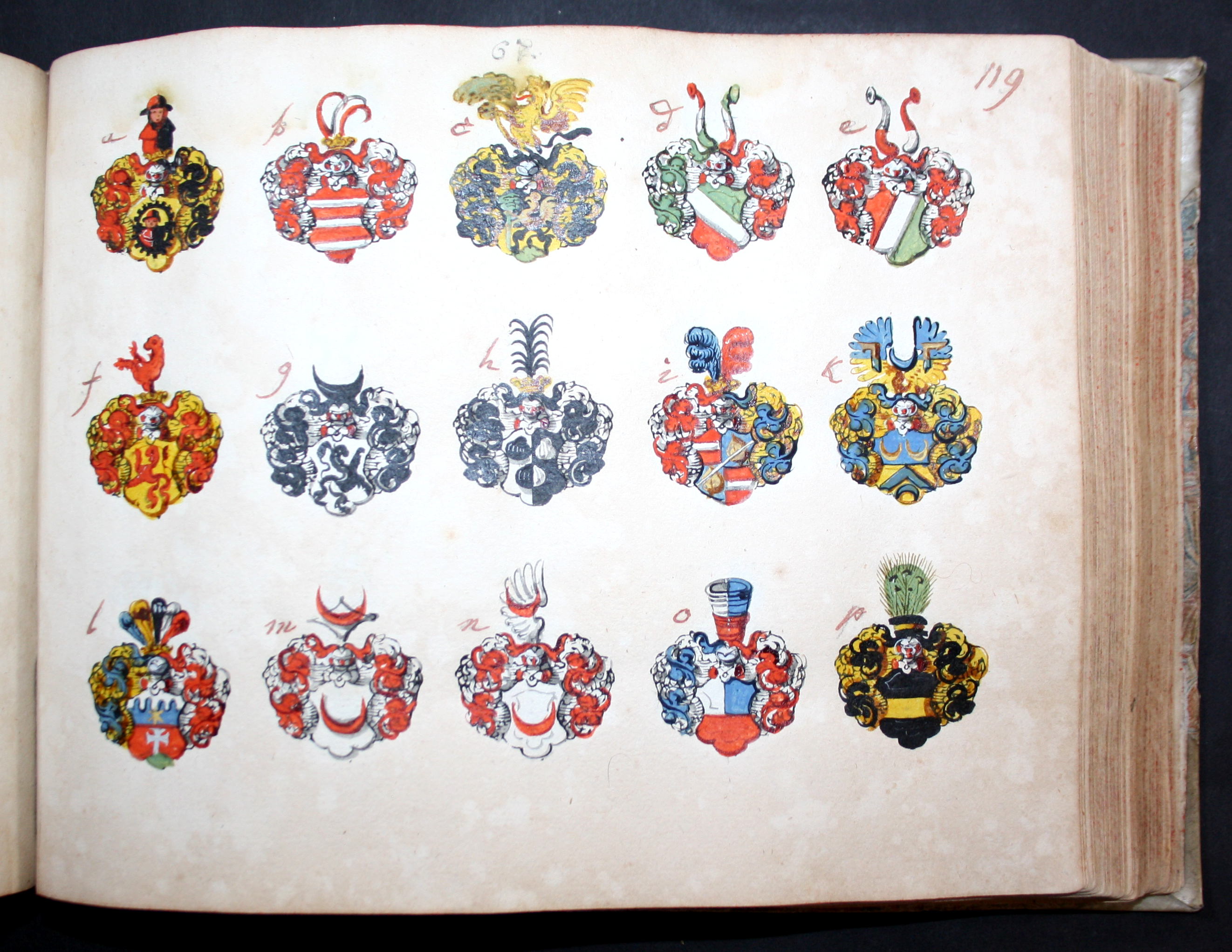 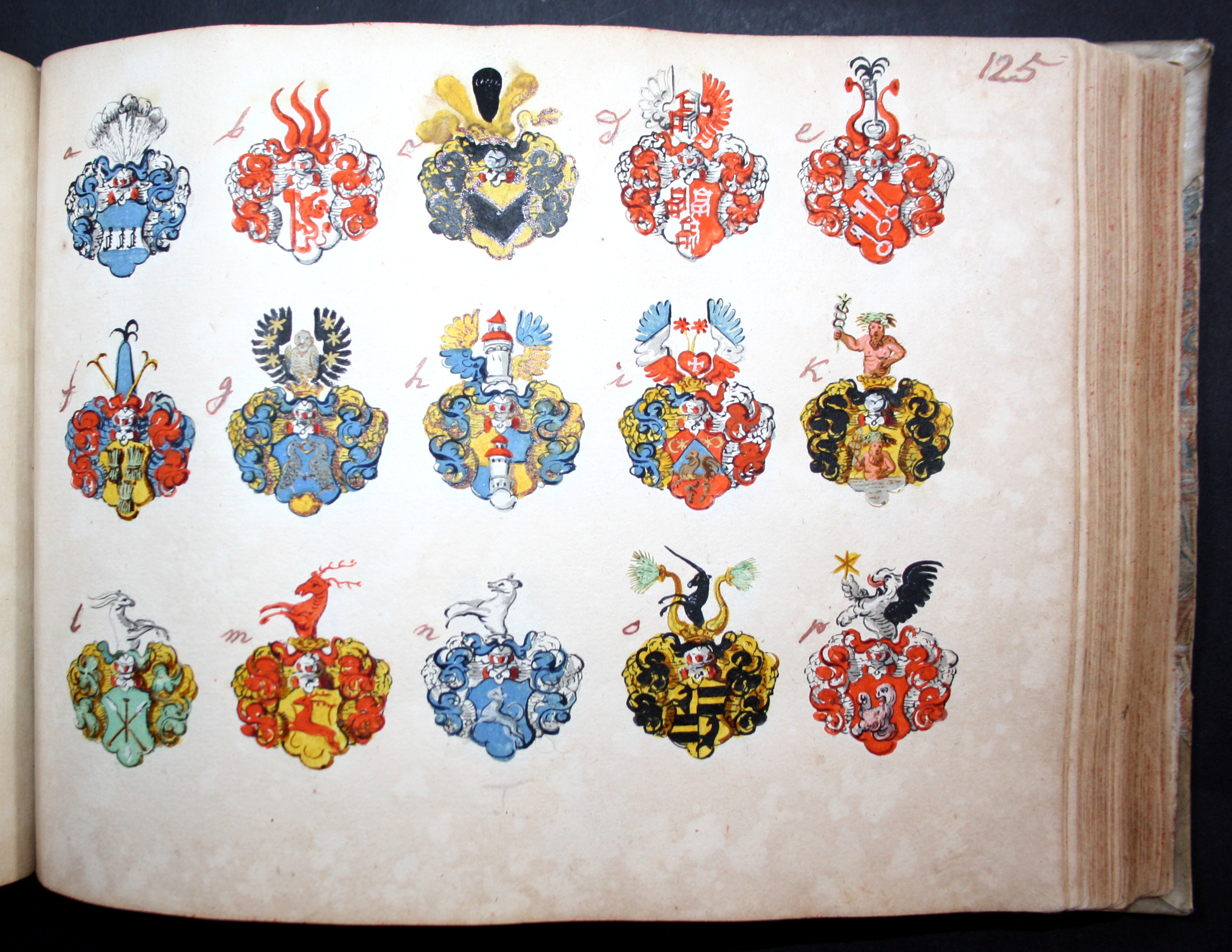 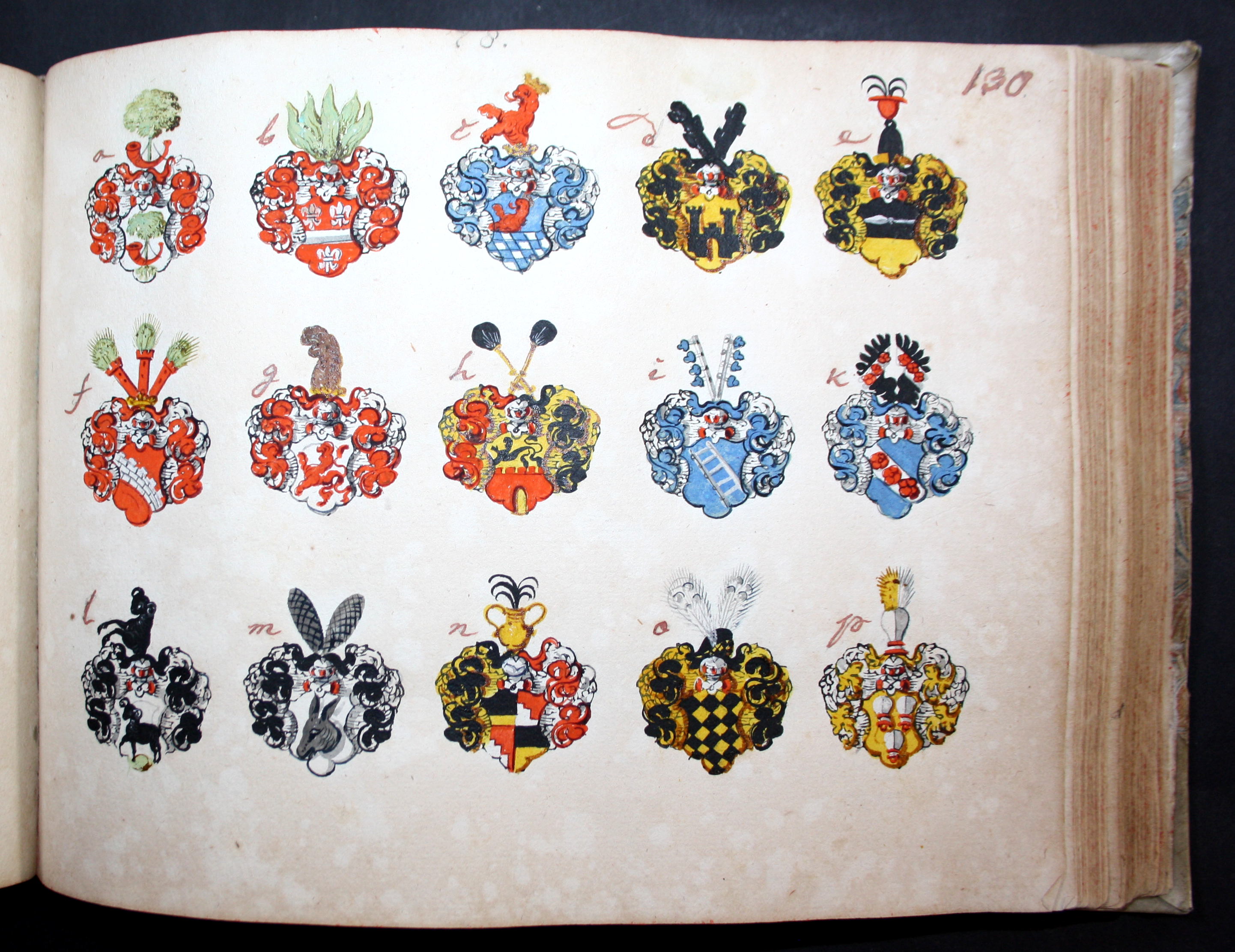 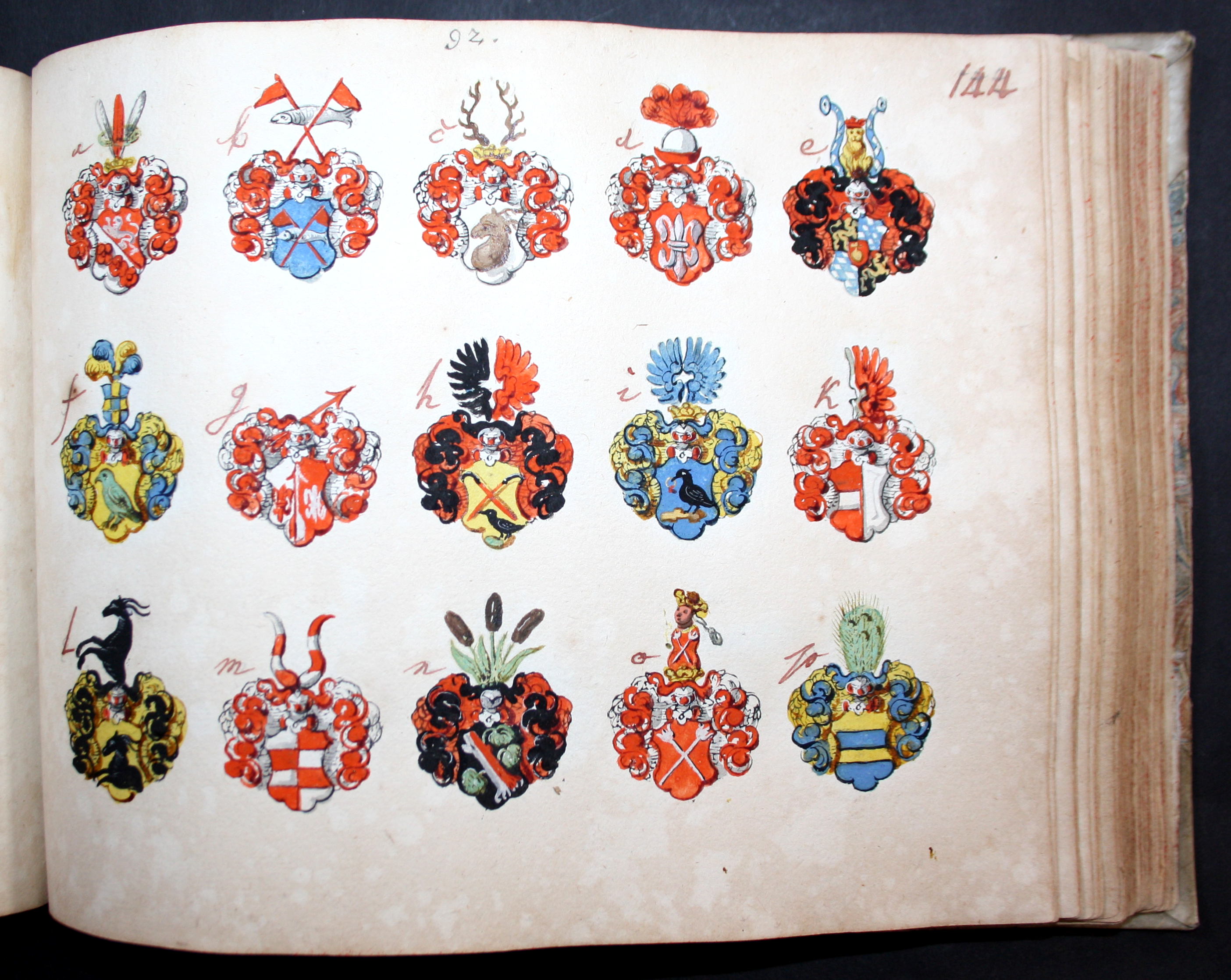 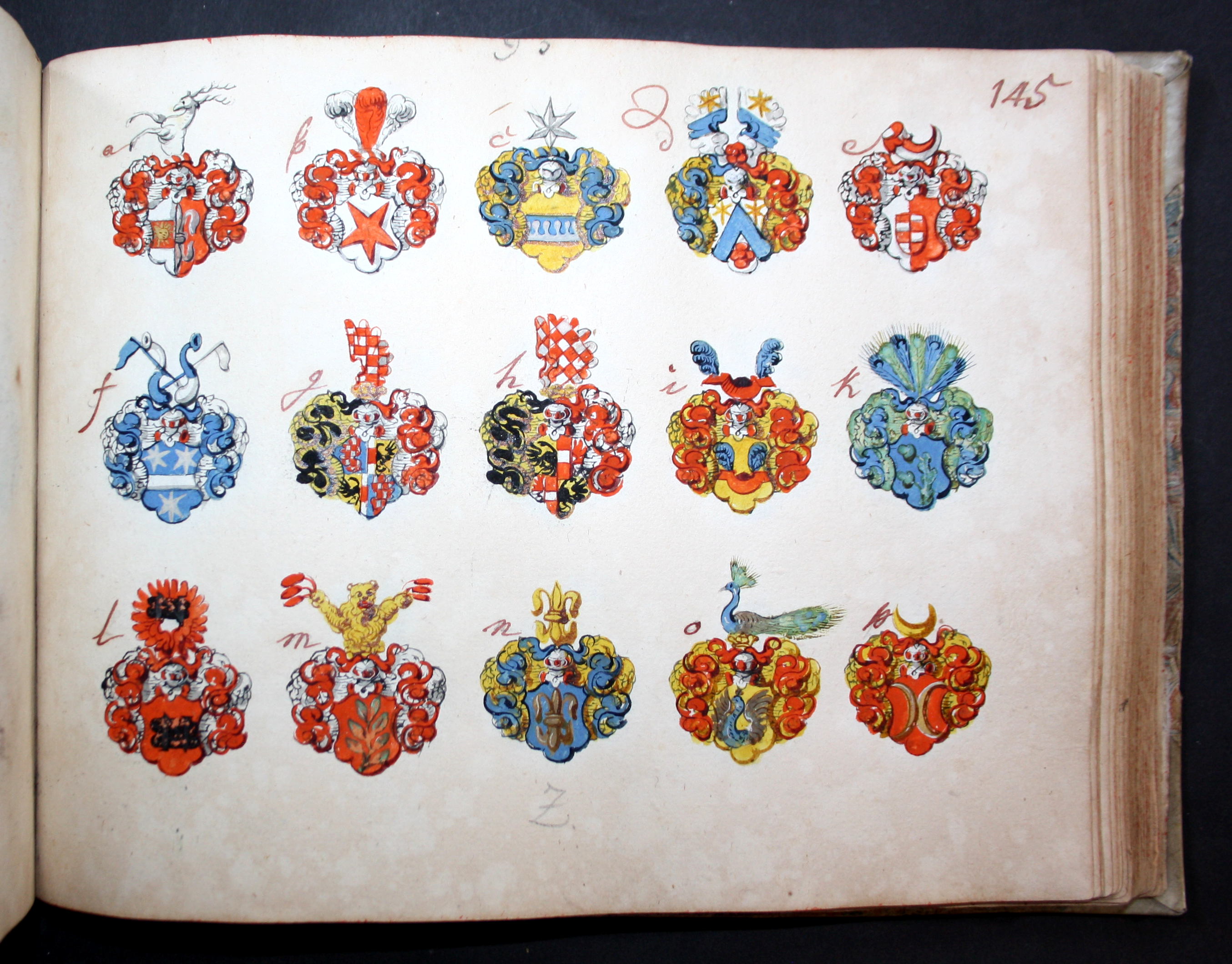 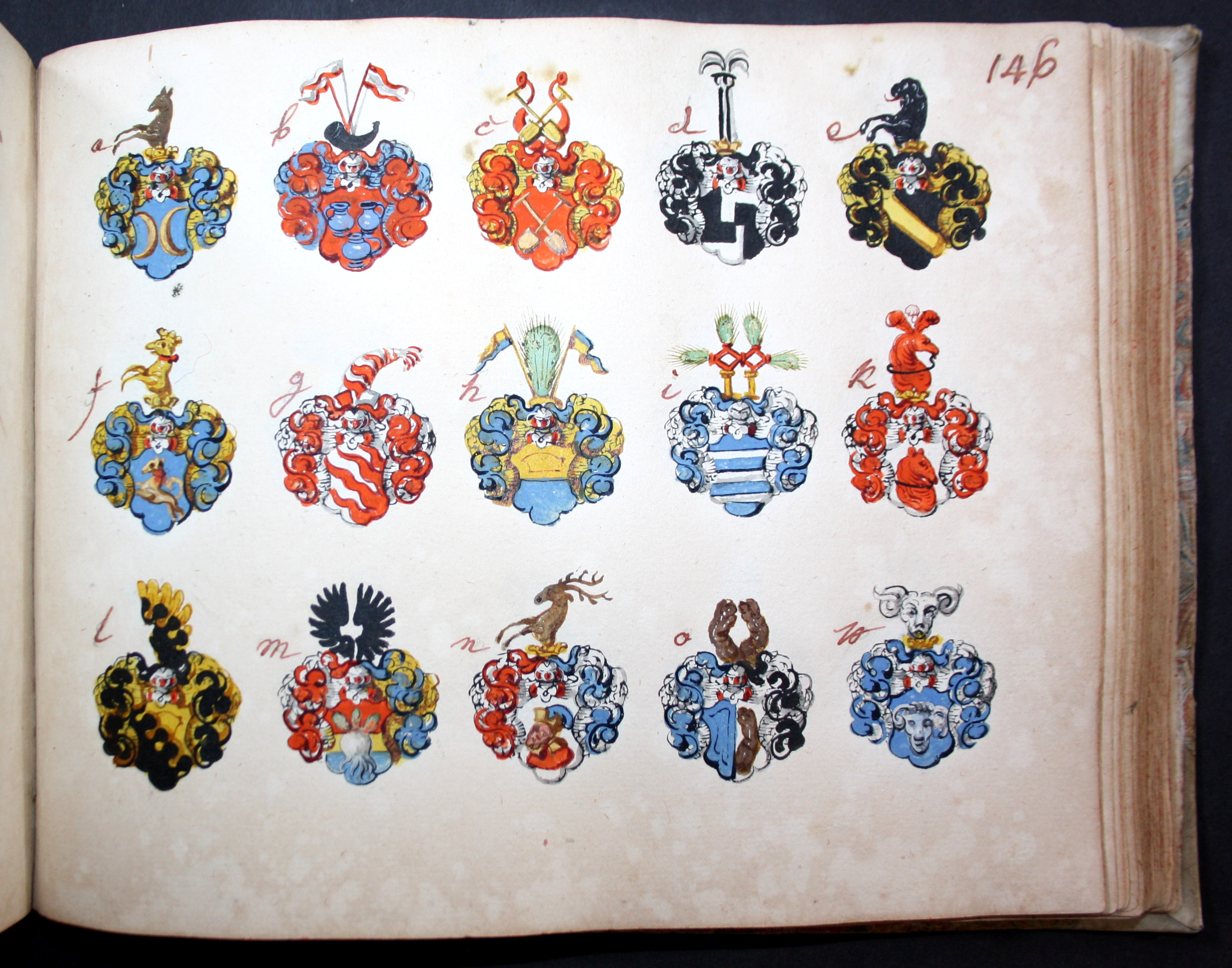 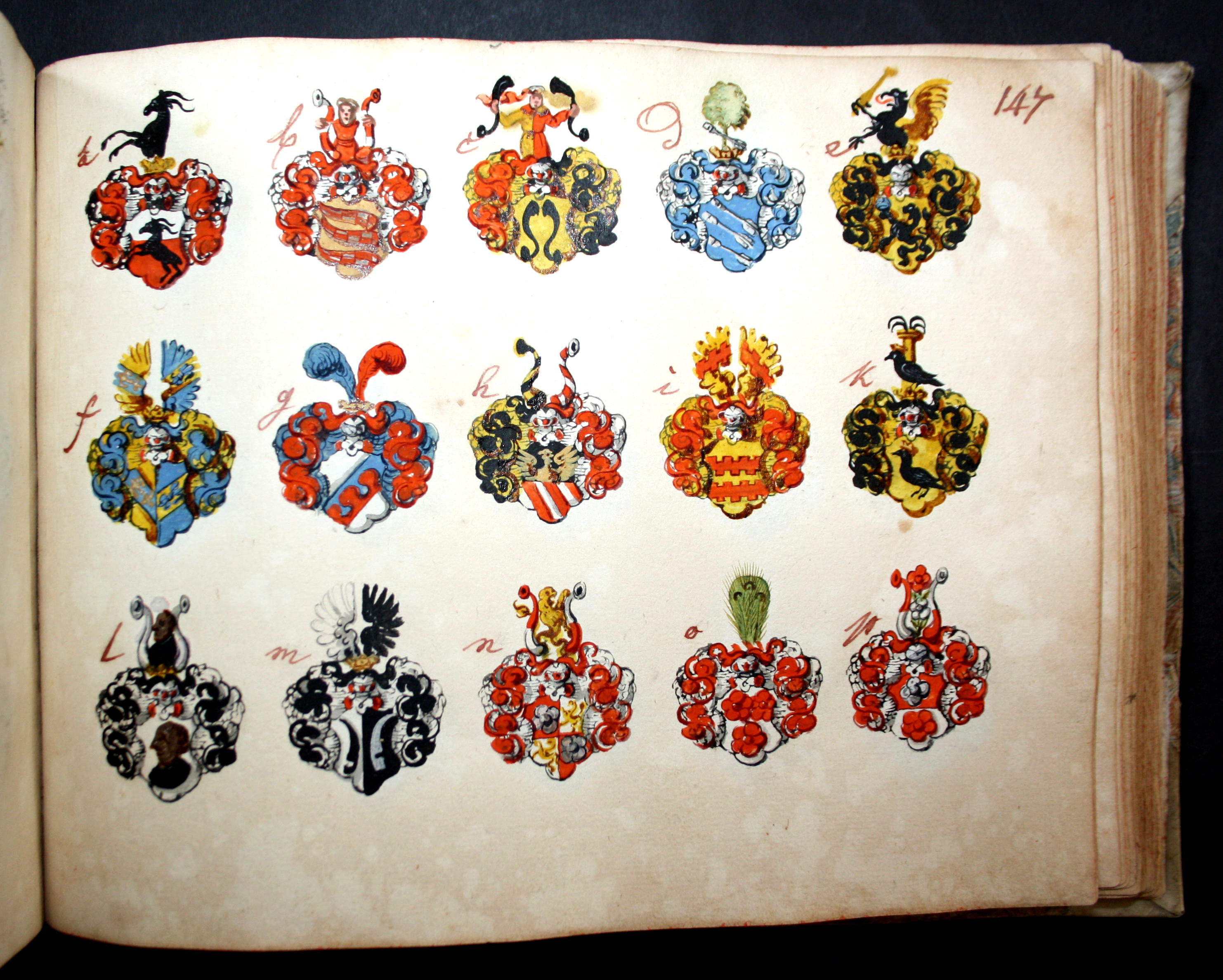 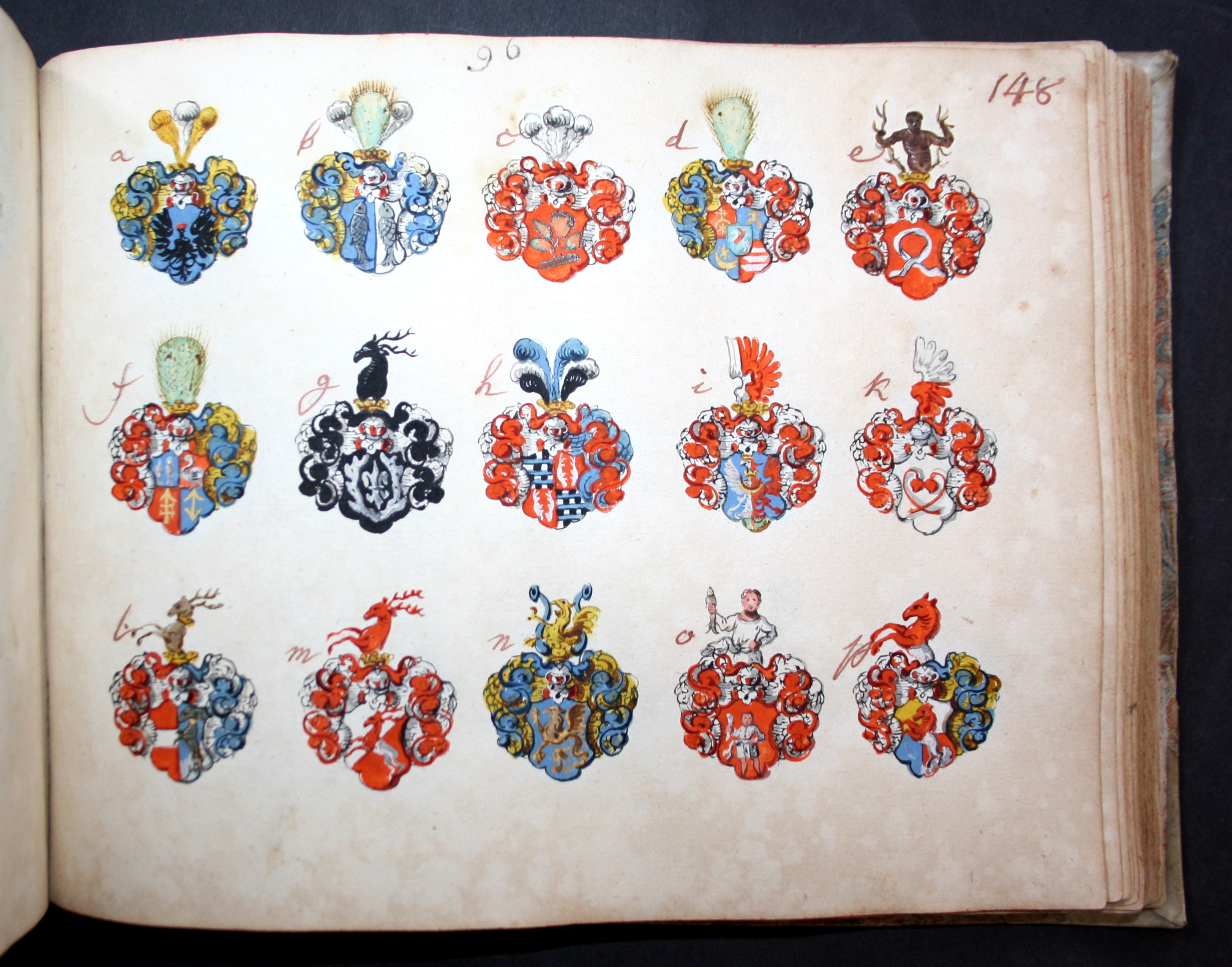 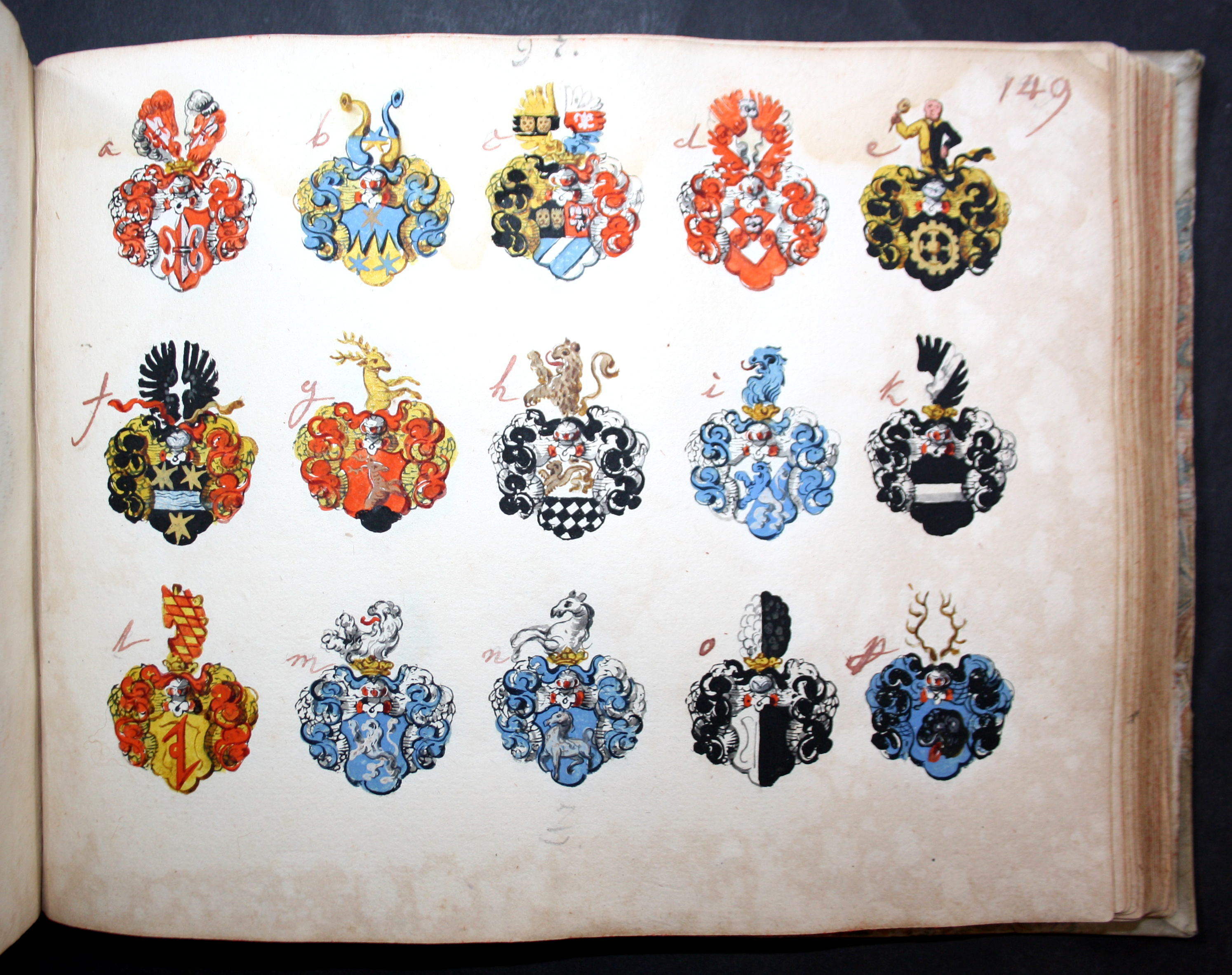 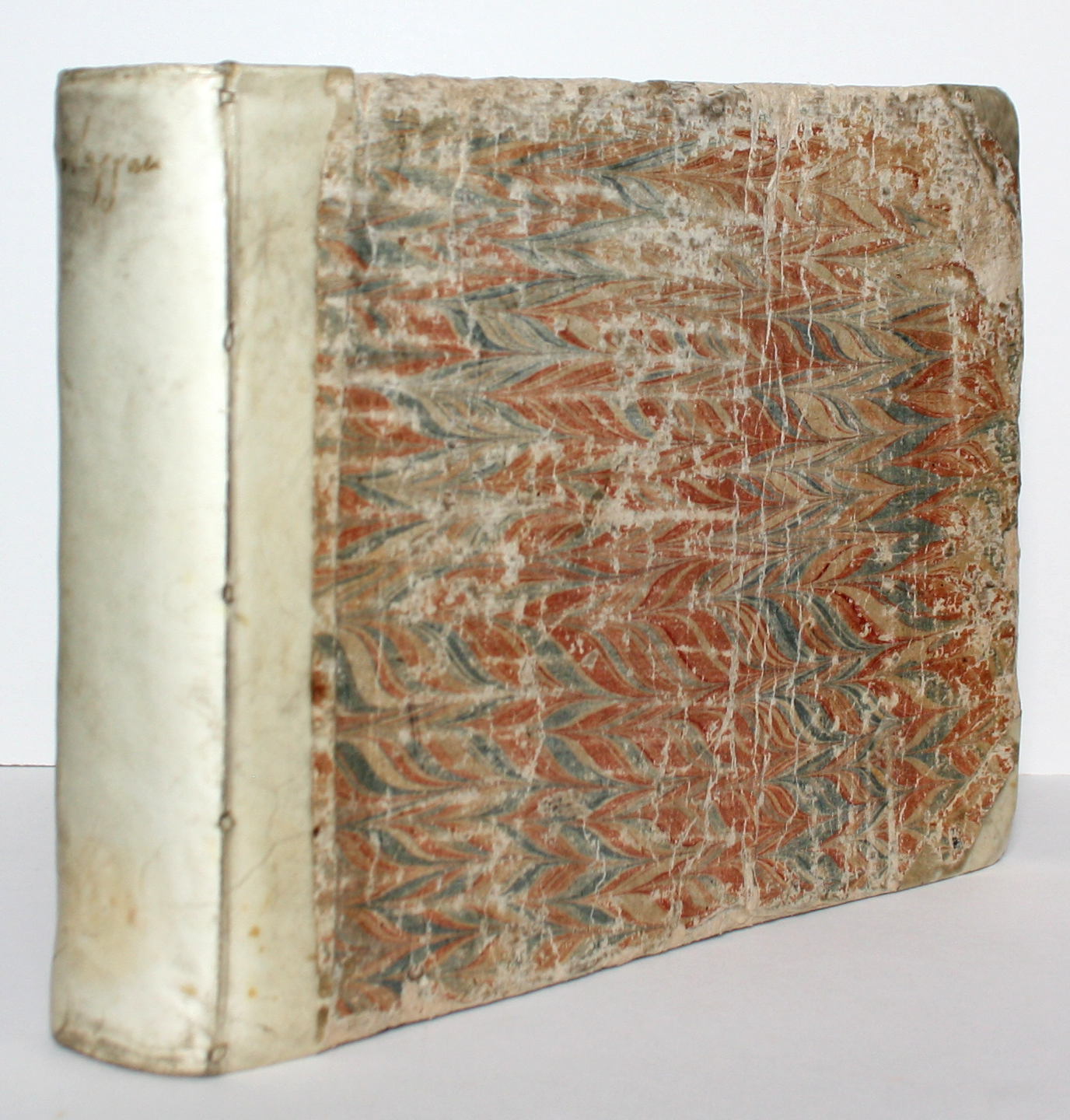