A triumphal arch for Charles VI

Design of an ephemeral triumphal arch for a Royal entry of Charles VI.

Johann Maximilian von Welsch was the son of a middle-class family in Kronach. In 1692 he joined the army as a lieutenant. Until 1699, he acquired experiences as a front officer and engineer on the Upper Rhine, in Savoy and Hungary. On extensive travels through Europe, he obtained a large amount of knowledge in the field of fortification and eventually became a sought after fortress builder. Lothar Franz von Schönborn (1655-1729) , Elector and Archbishop of Mainz, commissioned Welsch in 1704 with the expansion and completion of the Mainz fortress. In 1714, Welsch traveled with the plans to Vienna, to submit them to Charles VI (1685-1740). Welsch’s services to the construction of the Mainz fortress were so great that he even was ennobled by the emperor. At the same time, Welsch was appointed imperial lieutenant colonel and transferred to him the supervision of the Upper Rhine and other imperial fortresses. His reputation as a fortress builder was so great, that he was even called as a consultant for foreign constructions. Since 1707, Welsch was also responsible for several civil buildings such as palaces, churches and gardens. In 1729, the peak of his military career, he was the owner of his own regiment and commanded at least 5,000 soldiers. Due to his high military position, Welsch designed after 1723 only a few buildings and should have devoted primarily to his career as a major general and chief of the entire Mainz infantry. Among his most important works are the Fortress of Mainz, the Biebrich Castle, the Summer Palace Favorite (Mainz), the Castle Weissenstein and the New Arsenal in Mainz. He also drew the original plans for the Schönborn Chapel in Würzburg.

It is not surprising that Welsch got the order for a triumphal arch for Charles VI. Lothar Franz von Schönborn was Welsch’s employer at the time of the imperial coronation, and it was he who crowned Charles VI emperor. Welsch enjoyed a high reputation at the court of the elector, and Schönborn always spoke of him with great praise. He was evidently regarded as a sort of specialist for orangeries, for even in faraway Vienna Welsch had to advise the Reich Vice-Chancellor Friedrich Karl von Schönborn (1674-1746) in this matter.

The present triumphal arch was most likely intended for the Royal Entry of Charles VI into Würzburg in 1712, but ultimately was not built. The drawing depict a large ephemeral arch of around 45 meters in length and 22 meters in height. The central position reveals a statue of Charles VI in an oval chamber with two putti holding the heraldic imperial crown above his head. The oval was considered to be the embodiment of the perfection of the cosmic order, representing the emperor in the position of the sun. By doing so, Charles VI wanted to challenge the French king’s position as sun king. Above the emperor are the two figures of Pietas and Justitia, symbolizing piety and justice. The triumphal arch is clearly based on the ancient and fits well into the Roman imperialist iconography of Charles VI. The building is richly decorated with sculptures, bas-reliefs, columns, cartouches, vases and two candelabres. The four pairs of sculptures on the balustrade represent the cardinal virtues, prudence, courage, temperance and justice. The smaller portraits above the lateral portals depict Charles VI and his wife Elisabeth Christine of Brunswick-Wolfenbüttel (1691-1750). The two niches contain figures of former Habsburg emperors, and the two bas-reliefs depict Hercules and Janus. On the balustrade are also two animal figures of a stork and a dog. The stork stands for Pietas, the virtue of hommage to parents, gods and the state, whilst the dog is an old symbol of loyalty, solidarity and alertness.

Drawings by Welsch are in the Germanic National Museum Nürnberg, in the University of Würzburg, in the Kunstbibliothek (Berlin), in the Main-Franconian Museum (Würzburg), in the Palace Museum of Fulda and in the Municipal Archives of Mainz.

The present drawing is of eminent importance, as it is Welsch’s only surviving draft for an ephemeral architecture. 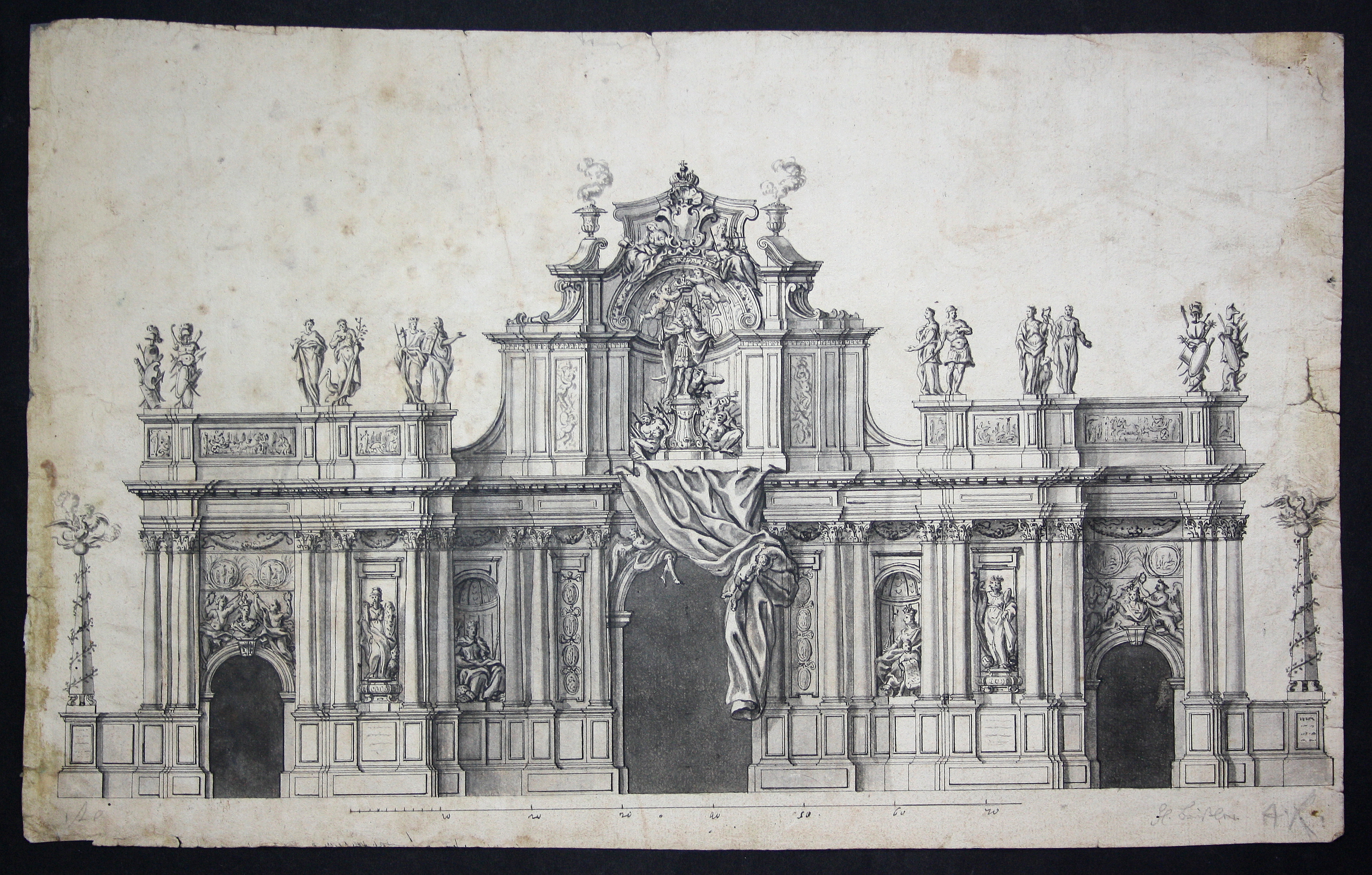